How are life satisfaction ratings related to living standards evaluations? 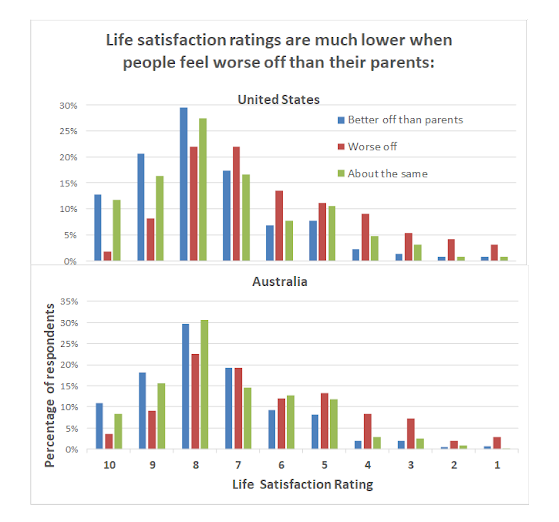 It is well known that in wealthy countries, further improvement of average incomes has only a small impact on average life satisfaction. Diametrically opposed explanations have been offered.

On the one hand, there are those who say that if rising incomes have little effect on average life satisfaction, that must mean that their apparent impact on living standards is a mirage – rising incomes do not count as progress.

On the other hand, there are those who say that average life satisfaction numbers are garbage – you can’t expect to get useful information by asking people to rate their satisfaction with life on a 10-point scale. They say that rising average incomes provide an accurate picture of progress.

In my view, those opposing explanations are both unhelpful to an understanding of the relationship between living standards and life satisfaction. In my book, Freedom, Progress, and Human Flourishing, I explain that rising incomes result in actual improvements in living standards, and count as progress because that is what people aspire to have. Since self-direction is integral to human flourishing, it is obvious that progress is inextricably linked to conditions that enable individuals to meet their aspirations more fully. In the book, I also explain why I think average life satisfaction is an appropriate measure of psychological well-being at a national level. I suggest that psychological well-being, along with wise and well-informed self-direction, is one of several basic goods that a flourishing human could be expected to have.

The failure of life satisfaction to reflect improved living standards is explained as follows in my book:

“The happiness surveys behind this puzzle, often referred to as the Easterlin puzzle, ask respondents to rate their lives relative to benchmarks such as the best possible life. Let us assume that when a person in a high-income country, call him Bill, answered that question in 1990, and he gave a rating of 8/10 for his life. Since then, Bill’s income has increased at about the same rate as the average for the country in which he lives, and there have been no abnormal changes in the circumstances of his life. In January 2020 … he again rated his life as 8/10. …

Bill’s income has risen, but his rating of his life has not risen.

The problem is that the survey prompted Bill to rate his life against a moving benchmark. Bill’s view of what constitutes the best possible life is likely to have risen over time. The people he sees living such a life have obtained access to better communication technology, and other things that have potential to enhance the quality of life. If you ask people to rate their current lives relative to a benchmark that is moving upwards over time, measurement error is inevitable.”

Ways to avoid the moving benchmark problem include the ACSA approach previously discussed on this blog (here and here). For reasons best known to themselves, happiness researchers have not shown much interest in using that approach to test the extent to which life satisfaction measures are distorted by moving benchmarks.

The moving benchmark problem does not arise when people are asked how their standard of living compares with that of their parents when they were about the same age. Surveys of that kind have tended to provide information consistent with perceptions of ongoing progress with rising incomes in wealthy countries.

There is no plausible reason why such inter-generational comparisons should be viewed as less credible than life satisfaction ratings, or vice versa. As I see it, they are cognitive evaluations of different things. The intergenerational comparisons are measuring perceptions of progress, and the life satisfaction ratings are measuring current psychological well-being.

In order to obtain a better understanding of the linkage between perceptions of progress and current life evaluations, it is necessary to bring those different cognitive evaluations together in some way. That has been made possible by inclusion in the latest round of the World Values Survey of a question asking respondents whether their living standards are higher, lower, or about the same as those of their parents when they were about the same age. The graphs shown above were prepared using the excellent Online Data Analysis facility of the World Values Survey. Information is shown for the United States and Australia, but similar pictures emerge for other high-income countries.

Perceptions of change in living standards that emerge from intergenerational comparisons are related to the recent history of economic growth in different countries. The greatest percentage perceive that their living standards are higher than their parents in countries that have sustained high rates of growth in per capita GDP over several decades. Of the 54 countries for which data are available, Vietnam has the greatest percentage in that category (90%) and Iraq has the lowest (21%). The corresponding percentages for Australia and the U.S. are 56% and 48% respectively.

Percentages who perceive that their living standards are lower than their parents follow a broadly similar pattern, but in most countries are within the range of 10% to 25%. Of the 54 countries, Zimbabwe is the only one where more than half of respondents perceived that their standard of living was lower than that of their parents. The corresponding percentages for Australia and the U.S. are 15% and 19% respectively.