Is it still self-evident that all humans have natural rights? 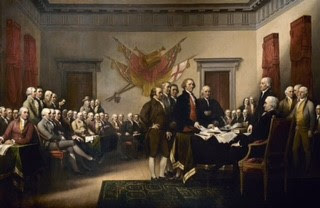 “We hold these truths to be self-evident, that all men are created equal, that they are endowed by their Creator with certain unalienable Rights, that among these are Life, Liberty and the pursuit of Happiness”. (The accompanying painting by John Trumbull depicts the Declaration of Independence being presented to Congress.)

It is strange that at a time when nearly everyone pays lip service to human rights, few intellectuals still recognize that, properly understood, such rights are self-evident and natural. Douglas Rasmussen and Douglas Den Uyl note that it is not even common now for classical liberals and libertarians to appeal to the natural rights of individuals. They explain:

“a large part of the reluctance to appeal to natural rights in explaining and justifying liberty has to do with the idea that speaking of the nature of things is not needed and is not defensible, and indeed that metaphysical realism is either false or senseless” (p 340).

Before explaining metaphysical realism, I must first provide context for the quoted passage. It is from The Realist Turn: Repositioning Liberalism, recently published by Palgrave. This book is the third in a trilogy. The others are: Norms of Liberty, in which the authors explain how liberty enables self-directed individual flourishing to occur without one form of flourishing being given structural preference over others; and The Perfectionist Turn, in which the authors explain, among other things, that self-directedness - exercising our rational capacity to pursue and achieve relevant goods and virtues - is fundamental to human flourishing.

Metaphysical realism is the belief that “there are beings that exist and are what they are apart from our cognition of them and that we can know both the existence and nature of these beings” (p 8). That may be self-evident to you. If so, you have managed to avoid being unduly influenced by philosophers who follow Immanuel Kant in maintaining that the nature of what is known in human cognition is the result of a priori structures of the human mind, rather than the nature of things that exist.

Much of the book is devoted to defending metaphysical realism from its critics. Those critics have a range of differing views, but many claim that the mode of our cognition must enter the content of what is known. It is possible to give a brief sketch of the nature of the responses provided by Rasmussen and Den Uyl, by reference to the way a human can be defined in terms of distinguishing characteristics. The relationship between our conceptual knowledge of the nature of humans and the real nature of humans is analogous to the relationship between a map and the territory it depicts. We begin with an imperfect conceptual map and proceed to improve it step by step to distinguish the characteristics of humans from other kinds of things. Our knowledge of reality is partial and incomplete, but capable of being revised. To cut a long story short, as we condense a vast amount of knowledge, we can come to the view that rationality is a fundamental operating feature of human nature (pp 292-296).

Chapter 3, entitled “On Principle” was of particular interest to me because it involves consideration of similar issues to those discussed by Friedrich Hayek in a chapter of Law, Legislation and Liberty discussing principles and expediency. Rasmussen and Den Uyl end up in much the same place as Hayek. For example, this paragraph seems to me to have a Hayekian flavour about it:

“We do not stick to principle because experience and practice are in need of being ordered, but rather because principles reflect an underlying order that will again come to reassert itself if only those principles are followed. In the economic environment in which we now live, for example, the Aristotelian might advise a steadfast adherence to the principles of a market order rather than piecemeal attempts to patch up the economy and stave off unpleasant consequences, precisely because of an understanding that market principles are the way to bring health back to the economy, even if that means a rough road along the way” (p 117).

That paragraph still makes sense to me if I substitute ‘Hayekian’ for ‘Aristotelian’. Hayek expressed similar sentiments in arguing against “a spurious ‘realism’ which deceives itself in believing that it can dispense with any guiding conception of the nature of the overall order” (LLL, V1, p 64).

However, when I think about the paragraph further I see a problem in accepting that Aristotle’s views – including his just price concept and opposition to lending money at interest - were consistent with “steadfast adherence to the principles of a market order”. Perhaps it is necessary to distinguish what a modern Aristotelian might advise – having had the benefit of having read the works of Adam Smith etc. – from what Aristotle advised.

I see no problem in accepting that the spontaneous order of a free market is an expression of “the nature of things”.

It would be unfortunate to allow the most important point that Rasmussen and Den Uyl make about principles to be lost in a discussion of labeling issues. They argue that “there is in the end no antipathy between principles rightly understood and consequences fully considered”:

When people discuss natural rights a question that often arises is where they come from. To believe in natural rights do we have to believe in a Creator who endows them? Rasmussen and Den Uyl do not appear to address that question explicitly, but they make a strong case that it is possible to reason our way from an understanding of human nature to recognition of such rights as being necessary to prevent various forms of human flourishing from being in structural conflict; and to protect people from having their lives, possessions and conduct used or directed by others for purposes to which they have not consented. The authors contend that a cultural change that enables the natural order to be seen as the basis for individual rights will be required to bring about an understanding of a proper defense of liberty (p 343). As discussed previously, I think a consideration of the nature of human evolution can also help us understand why we (as individuals) tend to have intuitions that other humans have natural rights that should be respected.

Of course, as Rasmussen and Den Uyl acknowledge, there are some people who choose not to recognize or follow ethical principles requiring the rights of others to be respected. As I see it, even in the liberal democracies large numbers of people believe that it is in the nature of things that the political/legal order must involve a struggle by different groups to have their flourishing advantaged at the expense of others. However, the authors have reinforced me in the belief that even when it appears impossible to implement a political/legal order that would sufficiently recognize and protect liberty, it is still worth considering ideal moral frameworks because such visions provide us with reason and motivation to care about practical problems of implementation.