Can kindness be made powerful without being lost? 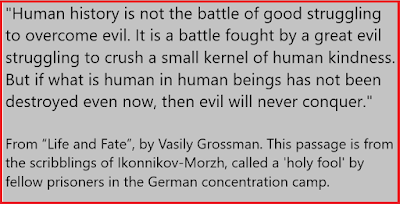 People who read Vasily Grossman’s book, Life and Fate, are not likely to forget the experience. That is not just because the book takes a long time to read, and is not easy to put aside once one has begun reading. Grossman provides memorable insights into the good and evil in human nature, by depicting horrifying events in the former Soviet Union during the Second World War through the eyes of the characters in his book.

In writing the book, Grossman drew extensively on his experience as a war correspondent with the Red Army in the battle for Stalingrad. Khrushchev’s denunciation of Stalin in 1956 made it seem possible to the author that views critical of the Stalinism could be published in a novel.  Life and Fate was completed in 1960, but its publication was suppressed because it suggests that the the Soviet regime was as inhumane as the Nazi regime. The manuscript was smuggled to the West some years after Grossman’s death in 1964, but was not published until 1980.

In this post I want to focus on Grossman’s view of kindness. Readers looking for more comprehensive reviews might be interested in those by Linda Grant, Robert Chandler, and Gideon Rachman. Rachman’s view is particularly interesting. He suggests that the book has contemporary relevance because political ideas that emphasize group identity seem to be coming back into fashion.

The most explicit view of kindness in the book is in its account of the scribblings of Ikonnikov-Morzh, an inmate in a German concentration camp. Ikonnikov followed the teachings of Tolstoy as a young man and joined a peasant commune after the Bolshevik revolution. Subsequently, his enthusiasm for communist agricultural policies was destroyed by the horrific implementation of collectivisation. Mostovskoy, an old Bolshevik who was also in the camp, concluded that Ikonnikov was unhinged, after he read his scribblings. Liss, the SS representative on the camp administration, told Mostovskoy: “You and I can feel only disgust at what’s written here. We two stand shoulder to shoulder against trash like this.”

Ikonnikov begins his tract by asking whether people have advanced over the millennia in their concept of “good”. He observes that over the centuries much blood was spilt as a diversity of concepts of good came into existence, corresponding to different sects, races and classes. The essence of his argument is that people struggling for their particular good always attempt to dress it up as a universal good:

“They say: my good coincides with the universal good; my good is essential not only to me but to everyone; in achieving my good, I serve the universal good. And so the good of a sect, class, nation or State assumes a specious universality in order to justify its struggle against an apparent evil”.

Ikonnikov describes how collectivisation of agriculture resulted in many people being annihilated “in the name of an idea of good” that he suggests was “as fine and humane as the ideal of Christianity”. He goes on to suggest that even the horrific crime of the Nazis were committed in the name of good.

He concludes that good is actually to be found in the everyday kindness of ordinary people, which he describes as senseless, wordless and instinctive. He gives an example of a woman who was unable to explain her acts of kindness to an injured enemy soldier.

Ikonnikov argues that it is not possible to make kindness powerful without losing it. He claims that when Christianity clothed kindness in the teachings of the Church Fathers, “it began to fade; its kernel became a husk”.

The tract ends with the passage quoted at the beginning of this post.

The question remains of whether Ikonnikov is right in claiming that kindness cannot be made powerful without being lost.

To answer that question, we need to consider what it means to make kindness powerful. Kindness does seem to be more prevalent in communities where people interact voluntarily for mutual benefit. In such communities, perhaps kindness is powerful because people tend to see acts of kindness as an example that they would like to follow.

However, Ikonnikov seems to have had a different kind of power in mind in considering what it means for kindness to be made powerful. People representing sects, races and classes may set out with kindness in their hearts to seek to use coercive powers in support of their goals. I agree that the exercise of that kind of power tends to end up as unkind to people who are not members of those groups.