Is it possible to have sensible policy discussions about climate change? 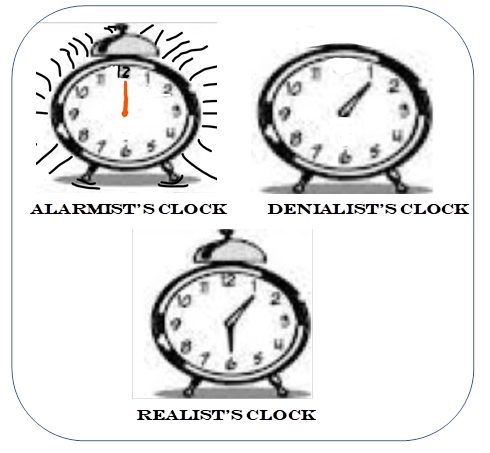 Development of public policy depends to a large extent on sensible public discussion to filter out stupid proposals.  Climate change is no exception. The problem is that instead of having sensible discussions a lot of people just accuse one another of being deniers or alarmists, and use political stunts to advance or defend stupid policies.

It is easy to get the impression that most people can be classed as either deniers or alarmists, but surveys suggest to me that such extremists make up a relatively small proportion of the population of most countries. How many people get classified as deniers and alarmists is obviously influenced by the way these concepts are defined.

It makes sense to classify people as “deniers” if they claim climate change is “not a threat”. A survey by the Pew Research Center conducted in 2018 found that the percentages saying that climate change is not a threat vary substantially among the 26 countries included, from 21% in Nigeria to 3% in France and South Korea. Corresponding numbers were 16% in the U.S., 9% in Australia and 4% in Sweden.

The Pew survey found that in most countries a majority viewed climate change as “a major threat”, but it would be an exaggeration to label all those as alarmists. The people I describe as alarmists tend to say things like: “It is already too late to avoid the worst effects of climate change”. An international poll by YouGov, taken in 2019, found that people who say that vary from 20% of the population in France to 4% in Oman. Corresponding numbers were 10% in the U.S. and Australia, 8% in Sweden, 11% in Britain, and 6% in China.

I was prompted to attempt to get a handle on the percentages of deniers and alarmists by my reading Bjorn Lomborg’s latest book, FalseAlarm: How climate change panic costs us trillions, hurts the poor, and fails to fix the planet. Lomborg sees climate change alarmism as a greater problem than denial. He suggests that the arguments of the deniers have been “thoroughly debunked” and approves of media refusing to give space to deniers. His main gripe is that media are “failing to hold climate alarmists to account for their exaggerated claims”.

However, it seems to me that different media outlets have different biases. Some pander to the prejudices of the noisy alarmists among their readers, while others pander to the noisy deniers. Unfortunately, the mass media no longer does much to promote sensible discussion of issues that have become politicized.

Lomborg’s book seems to me to advance a coherent viewpoint that could provide a basis for sensible discussion among people who are not wedded to extreme positions. His main points are as follows:

My overall impression is that Lomborg has made a serious effort to focus discussion on things that are worth discussing. I have some reservations about his views, which I will mention below, but my initial focus is whether the book is generating useful discussion. I have found a couple of reviews by people who could be expected to challenge the argument that Lomborg advances.

The first review is by Joseph Stiglitz, a Nobel prize winning economist. Stiglitz’s review was published in the New York Times. Rather than addressing the cost of current policies, Stiglitz appeals to an authority which he seems to view as infallible - an international panel chaired by himself and Lord Nicholas Stern – which apparently “concluded that those goals could be achieved at moderate cost”. I have not been able to find that conclusion in the report of his High-Level Commission, but I can’t claim to have read the document thoroughly. My brief reading left me with the impression that the costs will only be moderate if there is rapid progress in development of green technology. Stiglitz does not acknowledge that Lomborg advocates increased R&D for to promote more rapid development of green technology.

“Lomborg’s work would be downright dangerous if it were to succeed in persuading anyone that there was merit in its arguments”.

Rather than engaging in sensible discussion, Stiglitz seems to me to be intent on using polemics to defend alarmism.

Surprisingly, there has been more sensible review in “The Guardian”. That review is by Bob Ward, who is associated with the Grantham Research Institute on Climate Change at the LSE. Ward combines his review of Lomborg’s book with a review of Michael Shellenberger’s book, Apocalypse Never. Ward’s remarks are somewhat offensive - he labels the authors as “lukewarmers”, promoting a “form of climate change denial”. Nevertheless, he manages to acknowledge that they make legitimate criticisms of alarmism by environmentalists. He agrees that the world should be investing more in helping poor people become more resilient to climate change. He also expresses sympathy for the view that nuclear power has a role to play in creating a zero-carbon energy system.

The main problem I see with Lomborg’s argument relates to the use of GDP as a welfare measure. As well as the usual problems in the use of GDP in this way, there is the additional problem that many of the costs of adaptation are counted as making a positive contribution to GDP. For example, infrastructure investment to build walls to hold back rising sea levels is counted as part of GDP. As such adaptation investment comes to represent an increasing share of total investment, it will crowd out other investments that have potential to enhance human well-being.

My other reservation relates to something that is not central to Lomborg’s argument, as outlined above, but is difficult to let pass. It is his endorsement of the proposition that “if everyone does a little, we’ll achieve only a little”. That seems to me to promote unwarranted pessimism about the likelihood of success of the polycentric approach promoted by Elinor Ostrom.

In a paper presented to the World Bank in 2009, Ostrom suggested that rather than wait for national governments to take concerted action, the best way forward was multi-layered action by individuals and firms, as well as by local, state, and national governments. The polycentric approach is messy, but there are hopeful signs emerging that it is developing sufficient momentum to facilitate effective action. The individual actions of environmentally conscious individuals may not add up to much by themselves, but they seem to be inducing an increasing number of firms to modify their behaviour. Some firms are presenting an environmentally friendly image without doing much to back it up, but others seem to be actively planning for a carbon-free future. The announcement last year by the world's largest asset management firm, BlackRock, that it will put climate change at the centre of its investment strategy, seems to me to signify a substantial change in the way the game is being played. If enough firms adopt R&D, innovation and investment strategies based on expectations of a carbon-free future, those expectations will tend to become self-fulfilling.

Lomborg’s book is not likely to persuade many climate change alarmists (or deniers) to modify their views, but it provides a basis for the rest of us to have sensible discussions about policy options.

tejaswini said...
This comment has been removed by a blog administrator.
September 9, 2020 at 1:47 PM