What are the implications of declining productivity growth in high-income countries? 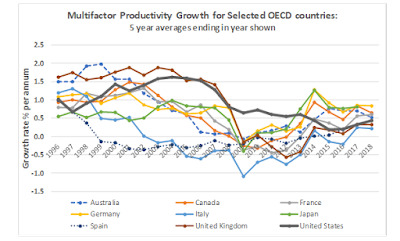 The productivity indicator used in the graph - multifactor productivity (MFP) – is that part of GDP growth that cannot be explained by changes in labour and capital inputs. It reflects the influence of technological progress and production efficiency.

In most instances, and in the longer term, it seems reasonable to expect a ½ percent lower rate of growth in MPF to be reflected in a ½ percent lower rate of growth in average incomes. Over 10 years, a decline in average income growth from, say, 2 percent per annum to 1.5 percent per annum would amount to the difference between a 22 percent and 16 percent increase in income.

That is not negligible, but it doesn’t cause me a great deal of angst. As noted previously on this blog (in a post written when I was more sceptical about the number of countries experiencing a decline in productivity growth) the slow-down in measured productivity growth in the U.S. and some other countries may be attributable, in part, to difficulty in measuring the outputs of the information and communications technologies (ICT) industries. When consumers can download more stuff that they do not have to pay for, the quality of their lives improves, even though that isn’t reflected in average income and consumption measurements.

It is also likely that some part of the decline in measured productivity growth may be attributable to environmental and social regulation. I am sceptical about the merits of much of that regulation, but I acknowledge that some of it provides benefits to humans that should be offset against associated income losses.

However, there is an implication of declining productivity growth that governments and their dependents should be thinking more seriously about. That is the potential for revenue growth to decline. Unless the revenue to GDP ratio is raised, a lower rate of growth of MFP is likely to translate to lower growth of government revenue. (Note that the same difficulty in measuring the outputs of the ITC industries for productivity estimation also applies to measuring income, sales and value added for tax purposes.)

So, why not raise the revenue to GDP ratio by changing the tax mix in favour of more efficient taxes that have less adverse effects on economic incentives? The political obstacles to tax reforms have not always been insuperable, but revenue-raising reform proposals are less likely to be supported than revenue-neutral proposals.

Another option is to raise the revenue to GDP ratio by raising tax rates. That is also likely to encounter political obstacles but, more importantly, the adverse effects on incentives seem likely to further reduce productivity growth. The marginal excess burden of taxes tends to rise as the tax rate is increased (see discussion here).

Yet another option is to let public debt continue to rise and hope debt servicing doesn’t become too much of a problem. We may actually see some problems emerging with that strategy over the next few years with increased public debt incurred in response to COVID-19. Perhaps central banks will succumb to government urging to over-stimulate economies to allow the “inflation tax” to reduce debt to GDP ratios. However, that would make ongoing debt accumulation a more costly strategy because it would result in high interest rates and thus higher costs of debt servicing over the longer term.

We haven’t considered debt default, but you have to be desperate to consider that!

My point is that governments and their dependents do not have any easy options available to adjust to an ongoing decline in productivity growth.

Economists advising governments will likely suggest that the best way forward is adoption of a package of reforms (including tax reforms) to raise productivity growth, combined with action to prune government spending. What governments will do, however, will depend to a large extent on the relative political power of different interest groups. In most countries, that seems to me likely to point more toward spending cuts than toward productivity-increasing reforms.

So, it seems reasonable to speculate that declining growth in productivity will be ongoing and result in cuts in government spending in policy areas where political resistance is likely to be weakest. Which policy areas are likely to be most affected?