Is cultural change responsible for a long term decline in productivity growth? 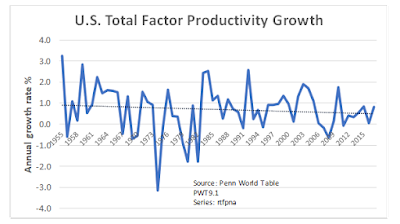 The story of cultural change that Edmund Phelps tells in Mass Flourishing has a happy beginning and a sad ending.

Phelps’ cultural story of the advent of rapid economic growth in Britain and America in the 19th century is much like that of Joel Mokyr and Deidre McCloskey (discussed here and here). The main difference is Phelps’ greater emphasis on grassroots innovation within firms.

Phelps makes a strong case that Joseph Schumpeter, famous for his theory of entrepreneurship, over-emphasized the importance of exogenous scientific discoveries (external to innovating firms) as a source of innovation. Phelps probably goes too far in downplaying scientific advances, but his story about the importance of grassroots innovation to the emerging modern economies seems highly plausible. He suggests:
“a modern economy turns people who are close to the economy, where they are apt to be struck by new commercial ideas, into the investigators and experimenters who manage the innovation process from development and, in many cases, adoption as well” (p 26).

Phelps’ focus on the U.S. economy as the main driver of technological progress seems appropriate. He notes that European countries experienced high productivity growth while playing the technological catch-up game, but their productivity growth has generally been lower than in the U.S. in recent decades. He attributes their lack of dynamism to ongoing corporatism over the decades since World War II. The classical corporatist model - involving state direction of industry and promotion of solidarity and social responsibility – has been augmented with codetermination of labour and capital (instead of owner-control) and stakeholderism (instead of a focus on income generation).

The author suggests that corporatism has also grown in the United States. Industries that have been subject to government policy interventions have been affected by a new populist type of corporatism as businesses have sought to use their political influence to mould government regulation to their advantage. The result is a “densely interconnected system of mutually beneficial relationships between private and public’, which tends “to redirect the economy’s innovation toward politicians”. He notes that supporters refer to that system as industry policy and detractors refer to it as corporate welfare. It should be referred to as rent-seeking.

The cultural change that Phelps sees as leading to a decline in economic dynamism is not fully reflected in changes in economic freedom indexes. He sees a deterioration in the “core functioning” of modern economies. This involves, among other things:

Has this cultural change in U.S. business caused a decline in the long-term productivity growth rate? If so, what can be done about it?

The addition of a few more years of data seems to lend support to the view of the historical pessimists that there has been a long-term decline in U.S. productivity growth. And Phelps’s cultural change explanation does seem plausible.

Unfortunately, the remedies that Phelps offers are less plausible. He suggests that governments can act to restore dynamism if they become aware of its importance and gain some practical knowledge of how innovation is generated. He suggests:
“Nations will have to push back against the resurgence of traditional values that have been suffocating in recent decades and revive the modern values that stirred people to go boldly forth toward lives of richness”.

Edmund Phelps seems to be hoping that a reinvented corporatism, perhaps inspired by the starship Enterprise, will foster grassroots innovation and be less prone to rent-seeking than the industry policies it replaces. Good luck with that!

I prefer to put my faith in the potential for new technologies to disrupt and subvert populist corporatism.