What is the "bourgeois deal" and why should you care? 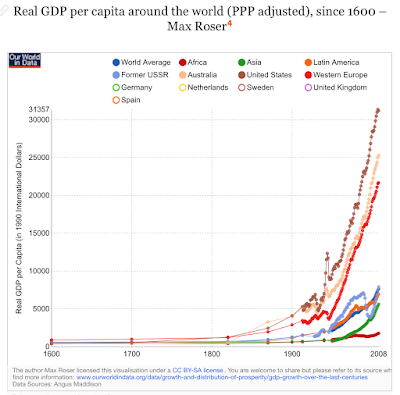 The ‘bourgeois deal’ is a term used frequently by Deirdre McCloskey in Bourgeois Equality, the third book of her trilogy which aims to show that it is ethical and rhetorical change that has enabled most humans today to be much better off than their forebears. The bourgeois deal refers to societal acceptance of innovations that compete with and displace old ways of doing things in exchange for widespread improvements in living standards.

Big deal? This has been a huge deal. Deirdre argues persuasively that trade-tested betterment associated with the bourgeois deal was responsible for the massive improvement in living standards enjoyed by vast numbers of people that began over 200 years ago and has now spread to most parts of the world (as shown in the accompanying chart prepared by Max Rosser using Angus Maddison’s data).

There are two aspects to the rhetorical-ethical revaluation discussed in Bourgeois Equality:


In emphasizing the importance of trade-tested betterment to economic growth, Deirdre McCloskey’s views are consistent with the mainstream view of economists, who, for the last half century at least, have acknowledged the important role of technological progress (and technological catch-up) in the economic growth process. Anyone who persists in espousing alternative explanations such as imperialism, or capital accumulation by itself, might benefit from reading Deirdre’s demolition of such theories.

The author seeks to differentiate her views from those of neo-institutionalists, such as Douglass North, who have sought to explain economic growth as stemming from institutional change i.e. changes in economic incentives associated with changes in the rules of the game in society (social norms as well as constitutions, laws and regulations). She succeeds in dismissing some factors, including property rights, previously emphasized by the neo-institutionalists. Property rights were reasonably secure in England for centuries prior to the industrial revolution.

Nevertheless, institutional change was necessary to enable intellectual innovation to be protected from the violent responses that had previously been meted out to heretics and innovators who were perceived to constitute a threat to long-established patterns of production, distribution and exchange.

Some components of relevant rhetorical and ethical changes do not fit under the heading institutional change. For example, changes in perceptions of personal identity that enabled some individuals to take on entrepreneurial roles seem to have been closely related to rhetorical change, but probably had little to do with changes in rules or incentives. Similarly, changes in the rules can have an independent economic impact that does not fit easily under the heading of rhetorical and ethical change. For example, political leaders sometimes get ahead of public opinion e.g. in promoting free trade or privatisation of government owned enterprises.

Perhaps we should be lumping rhetorical, ethical and institutional change together. The author cites an example which seems to involve all three elements. The reduced willingness of courts in England to support the restrictiveness of the craft guilds, from the early 17th century onwards, has been described by Eric Jones as attributable to “the national shift in elite opinion, which the courts partly shared”. In many instances, however, relevant rhetoric has been directed specifically toward changing the rules of the game. Adam Smith’s influential discussion of the appropriate role of government in Wealth of Nations comes to mind.

Hopefully, some of you - those who are still reading - will be wondering why the bourgeois deal is relevant to you. (I wonder whether any of those who stopped reading before this point will read the 650 pages of text in Bourgeois Equality. It seems to be a big ask to get anyone to read even 600 words these days.)

We should all care about the bourgeois deal because we are confronted with choices among a menu of different deals. Deirdre points out that, after 1848, the Bourgeois deal was challenged by the utopian Bolshevik deal and the Bismarckian (or Beveridge) deal.

The Bolshevik deal promised that all the problems associated with nasty concentrations of power in property owned by the bourgeoisie would be resolved by government ownership of the means of production and that the nature of man would change with the arrival of socialism. That deal was taken off the menu in 1989 (everywhere except North Korea) after it became too obvious that it was an extraordinarily bad deal for everyone except Communist party officials.

The Bismarckian deal stemmed from Bismarck’s scheme to steal the thunder from his socialist enemies by introducing a welfare state. Deirdre describes it thus:
“The deal is that the welfare state will substitute for your own and your family’s voluntary provision for old age or unemployment or medical care, and you will come to view the present state as your noble and benevolent lord” (p 604).

The Bismarckian deal lives on, coexisting uneasily with the Bourgeois deal because the high taxes required to support it act as a disincentive to trade-tested betterment. That is my judgement; I imagine Deirdre would agree, but I can’t see where at the moment. Like all good libertarians (the bleeding heart variety) she supports the provision of a welfare safety net directed specifically toward assisting those in need.

In my view we are now confronted with a third deal, which could be described as the doomsday deal, or if you want to personalise it, the Paul Ehrlich deal (after the biologist Paul Ehrlich who, like many other sect leaders who prophesy imminent doom, seems to have managed to maintain the loyalty of many of his followers even though the doom he predicted did not happen). Deidre describes such prophesies as the “eighth pessimism of our times”, rather than a deal. I see the doomsday deal as offering us the hope of being saved from an imaginary environmental doom if only we are prepared to forgo further economic betterment. Those who accept the doomsday deal deny that the bourgeois deal can be compatible with sensible measures to avert environmental disasters.

We should care about the bourgeois deal because it is constantly under threat. As Deidre McCloskey puts it in the table of contents for her book:
“Rhetoric made us, but can readily unmake us”.


What an intelligent and penetrating discussion!  You clarify for me what I dislike most about neo-institutionalism, namely, that is always, every time, about incentives.  Humans respond to incentives.  I admit it (I am after all an economist).  But other matters than cost and benefit move people, too.  The Anzac men going over the top at Gallipoli cannot be summarized as responding to incentives alone.


I like your supplement to the Bismarckian Deal--Beveridgean!
Posted by Winton Bates at 7:30 AM

What an intelligent and penetrating discussion! You clarify for me what I dislike most about neo-institutionalism, namely, that is always, every time, about incentives. Humans respond to incentives. I admit it (I am after all an economist). But other matters than cost and benefit move people, too. The Anzac men going over the top at Gallipoli cannot be summarized as responding to incentives alone.

One little disappointment is that an Australian (that is, you) sometimes misspells "Deirdre"! Only people is Australia and Ireland to get it right!

Dear Deirdre
Thanks for adding anothe comment on my blog.
My apologies for misspelling you name. As a person whose name is frequently misspelt I should take more care. I will correct the error.
Sincerely
Winton