How did the culture of growth evolve? 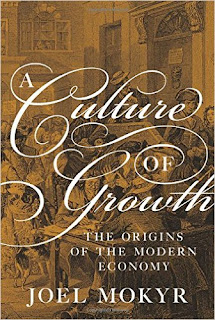 There can be little doubt that a change in attitude toward nature and the ability to harness it to human needs, that occurred among an educated elite in Europe in the period 1500 to 1700, paved the way for the industrial enlightenment in Britain, and the subsequent economic growth that has since benefited much of the world’s population. Joel Mokyr’s recent book, A Culture of Growth: The origins of the modern economy, explains that change of attitude in terms of cultural evolution.

Since cultural evolution involves individuals in making choices that change their beliefs, values and preferences it might be expected to be a gradual process. However, Mokyr uses cultural evolution to explain the large, discontinuous change in attitudes that occurred in Europe by pointing to: factors causing resistance to such change throughout the world; factors specific to Europe leading to a weakening of such resistance; and specific change agents espousing the cultural change that occurred. At the risk of over-simplifying the author’s scholarly efforts I will attempt to outline his thesis below.

Early modern Europe was a deeply religious age. The great Thomist synthesis, in which Christianity was merged with Aristotelian physics and metaphysics became a deeply entrenched dogma. The prevailing culture discouraged potential innovators from openly challenging this dogma. Science had previously flourished during some periods other parts of the world. It flourished in the first centuries of Islam, but was subsequently held back by mystical religious dogmas. It flourished in China during the Tang and Song dynasties (618-907 and 960-1127), but stagnated during the Ming and Quing dynasties (1368-1644 and 1644-1911) when institutions such as the imperial service examination system served to discourage intellectual innovation.

Political fragmentation is the specific factor which led to a weakening of resistance to intellectual innovation. In the context of the ongoing cultural unity of Europe, political fragmentation made it possible for intellectuals whose ideas were suppressed in one jurisdiction to continue their work elsewhere. The ubiquity of the printing press made a mockery of prohibitions on books by rulers of particular states. The rulers of different states sought to enhance their prestige by competing with one another to attract citizens with academic or other skills.

The third element of the evolutionary story is the work of cultural entrepreneurs, particularly Francis Bacon (1561-1629) and Isaac Newton (1643-1727). Joel Mokyr emphasises that Bacon’s contribution should be assessed in terms of his rhetorical contribution to cultural change rather than his specific contributions to science. Bacon challenged the traditional orthodoxy by emphasizing the potential for the “sacred duty” to improve the material conditions of life to be aided by knowledge gained from experimentation. He argued that knowledge ought to bear fruit in production.

Isaac Newton promoted the view that the universe is mechanistic and understandable and that the role of science is to establish empirical regularities. He also argued that this knowledge should be used for the material benefit of mankind.

The educated elite in Europe – members of the so-called Republic of Letters – looked upon Bacon and Newton as the most influential thinkers of their age. The Republic of Letters set up norms and incentives that supported the market place of ideas. Participants were expected to reply to letters, disclose findings and data truthfully and acknowledge intellectual debts. The main payoff for successful scientific efforts was enhanced reputation. Evidence and logic were needed to back up assertions in order to win acceptance for new ideas. Scepticism provided the basis for advances in codified knowledge.

In Britain, the Puritans were particularly impressed by Francis Bacon’s writings. They were deeply attracted to experimental research. The systematic study of God’s creation was seen to be the closest a Calvinist could get to understanding an inscrutable deity. The study of nature was seen to have potential to instruct interpreters of the scriptures. The Puritans saw a great deal of virtue in “good works”, which they associated with labour that was useful and profitable in a worldly sense. What we call leisure, the Puritans viewed as idleness. They regarded education in physics, science, mathematics and languages as deeply virtuous.

The Puritans showed little concern for improving institutions in ways that would benefit economic growth, but in their stress on empirics and the practical use of knowledge they constitute “an essential link between the early followers of Francis Bacon and the Industrial Enlightenment of the 18th century” (which Joel Mokyr wrote about in The Enlightened Economy). During the later Enlightenment period, science was, of course, able to “shed religion and advance on its own steam”.

In this brief review I have focused on the bare bones of Joel Mokyr’s model of cultural evolution. Readers interested in a broader perspective, should read Deidre McCloskey’s review. McCloskey’s important trilogy of books in this field also emphasise the importance of rhetorical contributions in promoting a culture of growth, but seem to imply that literature’s role in changing attitudes toward business made a greater contribution than Bacon’s cultural entrepreneurship in the field of science.  I mention this just to acknowledge that history can be complicated.

I find it difficult to read a book like A Culture of Growth without wondering what the implications it might have for the future. My reading of the history of the industrial enlightenment (sometimes still referred to as the industrial revolution) has previously made me think about the links between cultural change and economic policy reform. One might think that if a cultural evolutionary framework can help us to think about the past it should also be able to help us to think about the future. However, such models can only provide a framework. As Joel Mokyr emphasises models of cultural evolution are contingent rather than deterministic:
“In other words, they force us to recognize that things could have turned out differently than they did with fairly minor changes in initial conditions or accidents along the way” (p 232).


Hopefully, the “accidents” that  the world is currently experiencing will not destroy the culture of growth.
Posted by Winton Bates at 11:42 AM