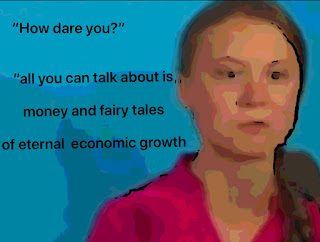 I have stopped laughing about Greta Thunberg’s performance at the United Nations a few months ago.

At the time, I was amused by her quixotic antics in attacking world leaders. People who think they can change the world by staging tantrums do not deserve to be taken seriously. It was predictable that Greta’s outburst would have a negligible impact on climate change policies.

I was also amused by Greta’s misconceptions about the relationship between economic growth and climate change.

On reflection, however, those misconceptions are no laughing matter. They are more widely held than I had imagined, including among some people who have had a great deal more education than Greta. By making economic growth the villain, climate activists seem likely to antagonize many of the people who would like more action to be taken to reduce greenhouse gas emissions.

Global climate change is perceived to be a serious problem by a high proportion of the population in many different countries. However, there is much less support for action to be taken to limit greenhouse gas emissions. The obvious obstacle is the additional cost to consumers of transition to alternative energy sources (including the cost of energy storage and backup to ensure reliable supplies). The advocates of zero economic growth add another obstacle by telling people they will have to make huge changes in their lifestyles to mitigate climate change. The lifestyle changes required for adaptation may seem preferable to many people.

When economists talk about economic growth, defined as an increase in the amounts of goods and services produced, some environmentalists just think of increases in the amount of stuff they don’t like. A little further thought might enable them to acknowledge that much additional stuff is being produced these days under environmentally friendly conditions. They might even be particularly fond of some additional stuff e.g. organic food, solar panels, electric cars and batteries. There are also some services they might like, such as health and education.

Greta and her followers are probably concerned that economic growth requires us to dig up more and more natural resources until there are no more to be discovered. If that was true, it would be easy to understand why they might see endless economic growth as a fairy tale. However, growth in capital stock - created by transforming natural resources into equipment, buildings and infrastructure - typically accounts for only a small proportion of economic growth. In the 1950s, research by Robert Solow, a Nobel prize-winning economist, showed that only one-eighth of the increase in gross national product per man-hour in the United States between 1909 to 1949 could be attributed to increased capital stock. The remaining seven-eighth, which became known as the Solow residual, was attributed to technical change. Subsequent research has shown part of the Solow residual to be associated with improvement in labour skills, with the remainder, often described as total productivity growth (or multifactor productivity growth) being attributed to innovation, technological progress and the advance of knowledge.

Economic growth will probably end one day, but there doesn't seem to be anything inherent within the growth process that must bring that about. How do Greta and her followers propose to end economic growth? Do they propose to require people to take the benefits of technological progress in the form of more leisure, rather than more goods and services? Or do they propose to stop the advance of knowledge and innovation?

The former approach seems more likely. It is certainly not unprecedented in human history for the advance of knowledge to come to a virtual standstill for long periods. However, it would be surprising to see the environmentalists of wealthy countries advocate policies to make that occur.

Much of the other innovation that has occurred over the last decade or so - for example, improvements in communication technology - seems to have been benign in terms of its environmental impacts. It is possible to think of technological innovations that have raised environmental concerns, e.g. fracking and genetically modified crops, but that could hardly justify the blanket ban on innovation that is implicit in a zero economic growth scenario.

My view of growth
At this point some readers might have gained the impression that I am an advocate of endless GDP growth. That is not so. My reservations about GDP as a measure of well-being, and of GDP growth as a societal objective have been on display in articles I have written over the past 15 year (for example one on the priority given to economic growth in Australia, and one on the concept of Gross National Happiness).

As discussed previously on this blog, I advocate growth in opportunities for human flourishing - that is, growth of opportunities for individuals to live the lives that they aspire to have. If increasing numbers of individuals choose a lifestyle involving stable incomes and more leisure to one with rising incomes, I can see no reason to object (unless they want me to subsidize their lifestyle choice). In my view, there is certainly no case for governments to require or induce people to work harder or longer to foster growth of GDP.

However, it seems likely, even in high income countries, that for the foreseeable future the aggregate outcome of choices freely made by individuals as consumers and producers of goods and services will continue to involve economic growth. That outcomes seems likely, even in the presence of the minimal restrictions on individual freedom are necessary to achieve widely accepted environmental goals.

Those who urge the introduction of policies to stop economic growth are contemplating a great deal more interference with the rights of individuals to manage their own lives than could possibly be justified to pursue widely accepted environmental goals.

Bottom line
Despite substantial reductions in the cost of alternative energy that have occurred over the last decade or so, the cost of transition to alternative energy still seems to be a major obstacle to effective international action to reduce greenhouse gas emissions. Those who make the false claim that economic growth is incompatible with widely accepted environmental objectives are adding a further obstacle to effective international action.

Instead of frightening people by urging governments to impose huge changes in lifestyles on citizens, perhaps environmental activists could pursue their goals more effectively by making a case for further government funding of research to help make alternative energy more affordable.

Of course she had a tantrum, that is what teenagers do. I don't think it's appropriate for teens (or even younger children) to be thrust into international politics when their brains aren't sufficiently mature to understand such complex issues. Heck, even most adults don't look enough at the nuances of complex issues!

Hi Leah
I support her right to free speech, but it seems amazing that she is given opportunities to speak at international forums. Do the organisers really think that an emotional teen will be able to persuade people who are sceptical about the science of climate change?