Why do opportunities for positive human relationships differ among countries? 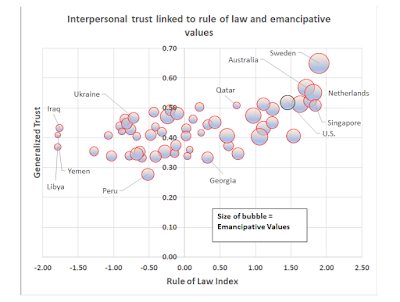 Positive relationships with family, friends, colleagues, acquaintances and trading partners was identified in a recent article on this blog as one of the five basic goods that a flourishing human would be expected to have. Positive relationships make contributions to individual flourishing that are universal, indispensable, not entirely incorporated in other basic goods such as physical and mental health, and they do not serve just as a means to a more basic good.

The meaning of positive in this context refers to motivations. Positive relationships are motivated by love, compassion, mutual benefit, or benign personal benefit, rather than by malice, or seeking personal gain at the expense of others. The dividing line between positive and negative motivations occurs at the point where there is an intention to infringe natural rights (as discussed here).

Opportunities for individuals to have positive relationships are more constrained in some countries than in others. That occurs to some degree because of constraints on liberty. Positive personal and business relationships of some kinds are not permitted in some parts of the world. Such constraints impinge on the capacity of individuals for self-direction, the basic good discussed in the preceding post.

Perceptions of the extent to which others can be trusted have a major differential impact on opportunities for positive human relationships in different countries. The following discussion makes use of the concept of generalized trust, as defined by Christian Welzel in Freedom Rising (2013). As Welzel explains, generalized trust “derives from trust in close others and then extends to unspecified others to eventually include even remote others”. In order to capture that idea, he combines variables from the World Values Survey representing close trust (trust of family, neighbours and people you know personally), unspecified trust (whether most people can be trusted, and whether most people try to be fair) and remote trust (trust of people you meet for the first time, people of another religion and people of another nationality). In the index construction, all variables are converted to a 0 to 1 scale, close trust is given a weight of 1, unspecified trust and weight of 2 and remote trust a weight of 3.

If you want to explain why trust levels vary between countries, it makes sense to look for reasons why people in some countries might consider their compatriots to be untrustworthy, such as the incidence of crime. The accompany chart shows the jurisdictions with highest levels of generalized trust also score highly on the World Bank’s rule of law index. That index incorporates data relating to the likelihood of crime and violence as well as information on the quality of contract enforcement, property rights, the police and the courts. In a recent article on this blog, I suggested that by penalising plunder rule of law encourages trust and improves incentives for mutually beneficial trade, as well as enabling societies to avoid the violence associated with do-it-yourself (DIY) justice.

The association between trust and rule of law might also reflect causation running from trust to incidence of crime. Societies with high levels of generalized trust could be expected to have stronger incentives for mutually beneficial, rather than predatory activity, a lower incidence of crime and hence, higher rule of law index scores.

The chart also suggests that higher levels of generalized trust tends to be associated with greater endorsement of emancipative values, as indicated by the size of the bubbles. Christian Welzel’s index of emancipative values incorporates twelve items from the World Values Survey covering values relating to autonomy, choice, equality and voice (e.g. protecting freedom of speech and giving people more say in government and workplace decisions). Emancipative values remain relatively dormant when people are poor, illiterate and isolated in local groups, but emerge strongly as people acquire more action resources (wealth, intellectual skills and opportunities to connect with others).

Since emancipative values involve greater tolerance of diversity it is not surprising that people holding such values would be more likely to trust people of different religions and nationalities. Welzel’s analysis in Freedom Rising shows that at an individual level people who endorse emancipative values tend to have higher levels of generalized trust, and that this impact is amplified in societies where those values are more prevalent.

Conclusions
Positive human relationships can be motivated by love, compassion, mutual benefit, or benign personal benefit. The extent to which others can be trusted has an important impact on the opportunities for positive human relationships. Trust levels tend to be higher in countries with relatively low crime rates. Trust improves incentives for trade and other mutually beneficial activities.
Generalized trust, which gives greatest weight to trust of people who have just met and people from different religions and nationalities, tends to be greatest where people hold emancipative values, involving greater tolerance of diversity.
Networks of individuals who can rely on each other for social support tend to be strongest in high-income countries.