What determines opportunities for a long and healthy life? 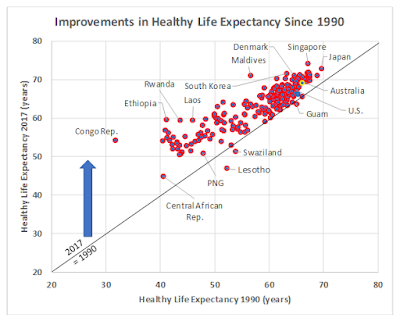 This post is about the reasons why opportunities for people to live long and healthy lives are much greater in some countries than in others. In the preceding post the prospect of a long and healthy life was identified as one of five basic goods of a flourishing human.

So, which are the countries in which an individual chosen at random would be likely to have the best prospects of a long and healthy life? The OECD’s Better Life Index gives top ratings on health to Canada, New Zealand, Australia, Israel and Ireland. The health indicator used in that index may not be reliable, however, because it incorporates self-reported health along with life expectancy at birth to take account of the quality of life as well as its length. Self-reported health seems to be unduly influenced by cultural factors. For example, while life expectancy in Japan is among the highest in the world (more than 2 years greater than in Canada) less than 40% of people in Japan rate their health as good or very good (the comparable figure for Canada is 88%).

Objective evidence published in The Lancet articles on Global Burden of Disease indicate that the difference between life expectancy and healthy life expectancy (the number of years people can expect to live in good health) is about the same in Japan and Canada (13 years for females and 10 years for males).

The Lancet study, which covers 195 countries and territories, indicates that healthy life expectancy (HALE) is highest in Singapore and Japan, but also relatively high in other high income countries.

HALE is strongly correlated with life expectancy (LE). The difference between HALE and LE rises somewhat as LE rises: on average from 6.4 years for a country with LE of 50 years, to 10.8 years for one with an LE of 80 years. The difference is typically about 2 years greater for females than males, but LE for females is about 5 years greater than for males in middle and higher income countries.
The accompanying graph shows that substantial increases in HALE have occurred in many countries since 1990. The increases have generally been most pronounced in countries with relatively low life expectancy.

Research seeking to explain differences in longevity among countries suggests that health care spending, higher income and education have beneficial impacts. An OECD study of 35 countries (mostly high-income) found that health expenditure made the greatest contribution to increased longevity (42 months) over the period 1990 to 2010, followed by education (15 months) income growth (13 months) and reduced smoking (5 months). The study found the impact of increased health spending to vary between countries, with relatively small gains in longevity experienced in the U.S. despite large increases in health care spending.

War and violent crime have a major impact on life expectancy in some parts of the world. For example, life expectancy among men who live in the north of Mexico apparently declined by about 3 years in the period 2005 to 2010 as a result of an increase in the homicide rate associated with drug wars.

Some of the important drivers of increased longevity have a common cause: health care spending has tended to account for a higher share of GDP as per capita GDP has risen. Econometric studies have suggested that this increased spending may be driven largely by demographic and technological factors, but income growth makes it possible.

The more fundamental determinants of opportunities for a long and happy lives are the factors contributing to the economic development that has led to high average income levels. There are virtuous circles involved in this process. As previously discussed on this blog, a plausible story of economic development also needs to take account of virtuous circles involved in interactions between culture and economic freedom. Where culture and economic freedom support markets, people have added incentives to gain reputations as being worthy of trust others in order to obtain the benefits of mutually beneficial exchanges. As people become more trustworthy and trusting, and more respectful of the rights others, they could be expected to support greater economic freedom. Economic freedom, and a culture supporting innovation, result in further economic development and economic development promotes a culture supporting greater economic and personal freedom. As part of this process, improvements in population health could be expected to contribute to higher labour productivity and further enhance income levels.

The economic development story outlined above implies that we should expect healthy life expectancy (HALE) to be higher, on average, in countries with higher levels of economic and personal freedom. In order to test that, HALE data for 155 countries have been matched with data from the Fraser Institute’s Human Freedom Index. The chart below shows that average HALE is about 10 years greater for the countries in the fourth quartile, with the highest freedom levels, than for countries in the first quartile, with the lowest freedom levels. 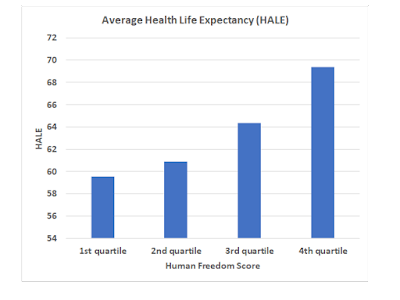 Conclusions
The countries in which a person chosen at random seems likely to have the best prospects of having a long and healthy life are characterised by high average income levels. Estimates of healthy life expectancy (HALE) published in The Lancet’s global burden of disease project are highest in Singapore and Japan. Since 1990, there have been substantial increases in HALE in most countries.
Health spending, income growth and education have contributed substantially to increased longevity. The more fundamental determinants of opportunities for people to have long and healthy lives are the cultural and institutional factors that have contributed to economic development. Evidence that high HALE is associated with high levels of human freedom supports an economic development story taking account of virtuous circles involving market freedom, cultures supporting freedom and health improvements.