What determines the opportunities for individuals to develop a capacity for self-direction? 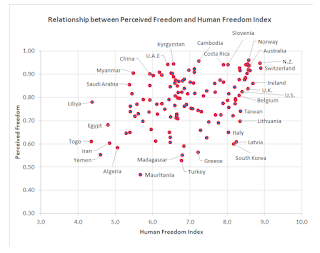 Wise and well-informed self-direction helps individuals to maintain other basic goods of human flourishing that are necessary to their pursuit of chosen goals.  The exercise of practical wisdom helps individuals to live long and healthy lives, maintain positive relationships, manage their emotional health, and live in harmony with nature.

How do individuals develop a capacity for wise and well-informed self-direction? It is possible to teach people about the virtue of practical wisdom, but it doubtful whether anyone has ever learned to exercise much practical wisdom without having responsibility to make choices in the real world. Individuals have the strongest incentive to learn how to make wise and well-informed choices in an environment that provides both great scope for freedom of choice and an obligation to accept responsibility for the consequences of the choices they make.

However, the opportunities for individuals to be well-informed also vary among countries depending on the knowledge that is readily available to them. Some of that knowledge is obtained through formal education, some is obtained on-the-job and some is absorbed through less formal interactions with family and friends. Individuals could be expected to have better opportunities to make well-informed choices if they live in countries where workforce skill levels are relatively high. That increases the chances that individuals will have easy access to relevant information for the important decisions they must make.

In what follows I consider how individual opportunities vary among countries, first in respect of freedom to choose, and then skill levels.

Freedom to choose
The accompany graph shows scores for perceived freedom and the Human Freedom Index for 126 countries for which matching data are available. Perceived freedom is the national average of positive responses to the Gallup World Poll (GWP) question: “Are you satisfied or dissatisfied with your freedom to choose what you do with your life?” The Human Freedom Index (HFI), developed by the Fraser Institute, incorporates 79 indicators of personal, civil and economic freedom to provide an objective measure of the state of freedom in each of the countries covered.

The graph shows that the countries ranked most highly using the HFI are also ranked highly in terms of perceived freedom. (Matching perceived freedom data is not available for Hong Kong, which was still one of the most highly ranked countries in the most recent HFI.) Switzerland, New Zealand, Ireland, Australia, Finland, Norway, Denmark, Netherlands, U.K. and Canada are presented as relatively free according to both indicators. However, perceived freedom also appears relatively high in some countries that more objective measures suggest are relatively unfree e.g. China. This may be a consequence of the binary nature of the GWP question. It would be more difficult for a survey respondent living under an authoritarian regime to tell a questioner that they are unsatisfied with their freedom to choose, than to give a moderately low score if asked to rate how much freedom they enjoy on a numerical scale. China’s score was close to the average in the 2010-14 World Values Survey (WVS) which asked respondents to rate on a scale of 1 to 10 “how much freedom of choice and control you feel you have over the way your life turns out”.

Skill levels
The indicator of skill levels constructed for the Global Competitiveness Index (GCI) provides an appropriate basis for international comparisons of the knowledge that people are likely to be able to access readily in making important decisions. The GCI skills indicator incorporates perceptions of participants in a survey of executives coving questions relating to staff training, skillsets of graduates, digital skills of the population, ease of finding skilled employees and critical thinking in teaching, as well as education statistics such as years of schooling.

The top 10 ranked countries in terms of skill levels (for a data set of 118 countries) were Switzerland, Denmark, Finland, Netherlands, Germany, Norway, Sweden, U.S., N.Z. and U.K. If that list looks familiar it might be because it overlaps strongly with the list provided earlier of the countries ranked most highly in the Human Freedom Index. A simple regression shows a strong association between skills and human freedom (R2 = 0.50).

Conclusion
Individuals have strong incentives to learn how to make wise and well-informed choices in countries where there is a great deal of economic and personal freedom. They are likely to have easier access to relevant information in countries with relatively high skill levels.
There is a strong overlap between the countries ranked most highly in the Human Freedom Index and the skill levels indicator of the Global Competitiveness Index. Both measures rank Switzerland, New Zealand, Finland, Norway, Denmark, Netherlands and U.K. among the top 10 countries.
Posted by Winton Bates at 4:59 PM