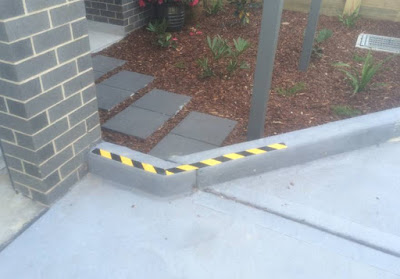 A few months ago, I would have been astounded if someone told me that a building certifier in Australia could legally issue an occupation certificate with front path pedestrian access as shown in the photo above. In order to use the path, it was necessary for pedestrians to step over a concrete obstacle (14 cm on the driveway side and 23 cm on the house side). There was no way anyone could plausibly claim that the concrete obstacle was necessary for drainage, because water ran away from it toward the centre of the driveway.

With the benefit of hindsight, it is obvious that before buying a townhouse off the plan I had been lulled into a false sense of security by claims of building regulators that the Building Code of Australia (BCA) sets minimum standards for safety, health and amenity of buildings. I was not aware of the existence of the National Construction Code (NCC) at that time, but it wouldn’t have surprised me that it purports to provide “the minimum necessary requirements for safety and health; amenity and accessibility, and sustainability in design, construction, performance and livability of new buildings”.

I should have known better! I knew from the experience of many years working for governments that bureaucrats are no less prone to making extravagant claims than are people working in other occupations.

You might be thinking that even though it would be most unfortunate if someone was injured by tripping on the concrete obstacle, the existence of an occupation certificate, certifying that building regulation had been complied with, would protect the Owners Corporation against a compensation claim. That might be too sanguine a view. Legal information available from a reputable online source suggests that owners might not be fully covered by insurance if they could reasonably be expected to be aware of the issue and had not taken steps to address it.

The bigger issue of regulatory capture

In drawing attention to this pedestrian access issue, I am conscious that it is trivial by comparison with the building safety issues currently in the news associated with high-rise apartments in Sydney (Opal Tower and Mascot Towers). Michael Lambert, a former secretary of NSW Treasury, who reviewed building regulation for the New South Wales government and presented his report in 2015, has been quoted as saying that the issues associated with the Opal Tower “are likely just the tip of the iceberg”.

The Lambert report found “the incidence of building defects is significant” and “the incidence appears higher in NSW than elsewhere”. Lambert was not able to be more specific about incidence because “comprehensive information is not regularly collected on building defects”. He recommended that performance data be collected to enable the performance of the system to be assessed against clear objectives. In particular, he proposed a program of proactive investigations and audits of certifiers, linked to an education and training program for them. Lambert also recommended action to reduce the conflict between the accountability of certifiers for acting in the public interest and their commercial drivers for commercial success, including maintaining good relations with builders and owners/developers.

Michael Lambert has expressed disappointment that the recommendations of his report have not been more fully acted upon by the NSW government. It is not clear to what extent timely implementation of Lambert’s recommendations would have improved the quality of high-rise building in NSW, but the government’s failure to act more decisively on his proposals for incremental improvement seems to indicate that regulatory capture has become entrenched in this industry.

The theory of regulatory capture, advanced by the Nobel Prize winning economist, George Stigler, among others, refers to the tendency for regulatory systems created to act in the public interest, to instead advance the commercial or political concerns of special interest groups that dominate regulated industries. As it currently operates, the system of private certification seems to provide more protection to developers, builders, architects, engineers, and local government agencies that provide planning approval, than to home buyers.

Does more regulation provide the answer?

The knee jerk reaction of many people to quality control problems in the building industry is to urge that regulation be extended further and enforced more rigorously. However, even if determined political leaders can manage to steer some regulatory reform through the process of industry consultation, we need to face the reality that it would be prohibitively expensive for building regulation to be made much more than a ‘box ticking exercise’. Regulators can certify that certain things have been done, but that doesn’t ensure effective quality control. For example, regulators can certify that concrete has been poured to construct foundations, but it takes the resources of a building firm to control the quality of the concrete that is poured.

The main commercial incentives for firms to maintain effective quality control are to enhance their reputation in the market and to avoid litigation. Reform-minded political leaders should be seeking to identify how those market and legal incentives are impaired, and what corrective action could be taken.

Some readers might still be thinking that additional box ticking regulation would be an appropriate response to the specific question of safe residential access. I am wary of that approach because it could end up adding excessively to building costs and make homes less affordable.
Consider, for example, the guideline for dwelling access proposed by Livable Housing Australia:
“A safe continuous and step free path of travel from the street entrance and / or parking area to a dwelling entrance that is level.”

Complying with that condition would not have added much to the construction cost of our new townhouse, but in many instances a step free path would impose excessive costs. In a paper written over a decade ago, Alan Moran, pointed to evidence from government housing authorities - which commission a considerable part of the housing that is specifically geared towards the needs of people with disabilities - that the costs of the building are increased by at least 4% and up to 20% where houses are built fully compliant with the relevant Australian Standard.

The issue of liability

There are two overlapping aspects relating to the issue of liability for safe pedestrian access to residences. The first aspect is liability for compensation in the event of personal injury. My understanding is that the law sensibly provides liability on all parties involved to exercise reasonable care. I don’t know whether courts have held that developers and builders maintain some liability after residences have been sold. It would be a travesty, in my view, if they are able to hide behind an occupation certificate, when that does not certify that minimal safety standards have been met for pedestrian access.

The second issue of liability relates to the question of who should be liable for ensuring that reasonable expectations of home buyers are met in relation to safe pedestrian access. In thinking about this I have gone back to a paper written many years ago by Ted Sieper, an astute Australian economist who has been under-recognized because he eschewed academic norms to publish or perish. (Ted’s paper was entitled: Consumer protection – boon or bane?  It was presented to a C.I.S. conference held at Macquarie University in April 1978.) Ted argued that in considering the choice between the alternatives, caveat emptor – let the buyer beware – and caveat venditor – let the seller beware – law makers should compare the relative transactions costs that would be imposed on buyers and sellers. He noted:
“while consumers with different safety requirements can discriminate cheaply among different products, producers can only with great difficulty discriminate among consumers”.
(I am grateful to Greg Cutbush for suggesting that I look for Ted’s paper.)

I think Ted’s transactions cost point is highly relevant to the issue of safe pedestrian access. It seems reasonable to expect that that developers and builders would generally show some care to avoid compensation claims for personal injury. However, it is up to individual home buyers to shop around to obtain the standard of access safety they require.

With the benefit of hindsight, we should have insisted that an appropriate standard for safe residential access was written into the contract of sale before we agreed to buy. If the developer had been reluctant to agree to that provision, that would have set alarm bells ringing in our minds.

Regulatory authorities should be required to renounce misleading claims they have made that the BCA and NCC provide minimum necessary standards for safety.

If building regulators want to be helpful to home buyers, they should advise them to consult their lawyers to ensure that contracts for sale require developers to meet appropriate standards for safety and amenity.

I am sorry to hear about your disappointing experience. You seem to have both a strong constitution and a clear mind not to be joining the ranks instinctively calling for more regulation.

I have been trying to use the same arguments about adding to costs and not necessarily improving the situation but to little avail. Also using the legal system more rather than turning straight to regulation. I seem to be Robinson Crusoe on this.

Added to the mix now are the CFMEU and the ABC pushing for a national approach. My feeling is that would probably not help, as there are good reasons to try and deal with this issue at a more local level (state legal systems, local planning).

Thanks Stephen.
It is interesting that many people are pushing for more action to ensure compliance with regulation as the answer to the quality control problems in high rise apartments when failure to comply with regulation may not become evident until a decade after the building has been completed. By then the developer and builder are often insolvent.
We need to be thinking about why it is that limited liability serves us well in most parts of the economy, but doesn’t seem to work very well in the building industry.