Does Israel Folau deserve support from advocates of free speech? 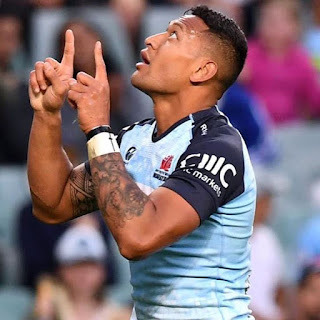 If your employer sacks you for breaching your employment conditions by publishing material on social media, I don’t think you can claim that your right to free speech has been violated. By accepting an offer of employment, you agree to abide by the conditions of that employment. The employer has not used force to prevent you from publishing the material concerned. You remain free to continue to publish such material after having been sacked.

However, that doesn’t necessarily mean that the Australian Rugby Union (ARU) acted legally or wisely in sacking Israel Folau. I will leave the legal question to the lawyers. My focus here is on the wisdom of sports clubs and other organisations taking stands on social issues and insisting that employees align with their values.

Israel Folau was sacked for a post on Instagram asserting that hell awaits drunks, homosexuals, adulterers, liars, fornicators, thieves, atheists and idolaters, unless they repent. The ARU insists that such comments preclude Folau from remaining an employee of the ARU because they do not align with the ARU’s values.

I think it was most unwise for the ARU to assert values in conflict with the opinions any employee might express on theological matters, such as the existence of hell and who may go there. The values pursued by sporting organisations should be related to furthering the interests of their sport and the collective interests of its supporters. It would be reasonable for the ARU to insist that players refrain from being offensive to other team members, but any team member who claimed to be offended by theological assertions made on social media should be told to grow a thicker skin.

It seems to me that Rugby Australia was also unwise to support the ‘Yes’ case in the national plebiscite on same sex marriage in 2017. Despite the merits of the ‘Yes” case, sporting organisations should have avoided taking public positions on this issue. It is obviously imprudent for organisations that seek the support of the general public to risk causing offence to significant groups of supporters by becoming involved in divisive social issues.

Qantas is another organisation that came out strongly in favour of the ‘Yes’ case, even though its involvement in the issue risked offending significant groups of customers, shareholders and employees. I wonder whether the CEO and Board considered the possibility that supporters of the ‘No’ case might arrange a boycott.

In a post on his blog a few weeks ago, Jim Belshaw speculated whether an employee of Qantas who supported the ‘No’ case might be reluctant to speak out publicly:
“I thought what would I do if I worked for Qantas and wanted to campaign for no? Would they fire me or would I just be marked never to be employed again?”
Jim speculated that a person in that situation might consider that the best way to save their job (or contract) would have been to shut up.

Jim’s comments prompted me to re-read John Stuart Mill’s argument in On Liberty that “the moral coercion of public opinion” should be of as much concern to advocates of liberty as “physical force in the form of legal penalties”. I remain unconvinced that the concept of ‘moral coercion’ is meaningful. Public opinion doesn’t force anyone to do anything, or to refrain from doing anything.

Yet, I feel that Mill was on the right track in urging advocates of free speech to oppose attempts by cultural warriors to use employment conditions as a weapon to keep people silent. Mill seems to have been particularly concerned that under the influence of religious bigots, public opinion favoured use of employment conditions to prevent people from expressing socially progressive views. However, the argument he used also applies to attempts by the advocates of socially progressive causes to influence public opinion in favour of the use employment conditions to silence social conservatives:
“In respect of all persons but those whose pecuniary circumstances make them independent of the good will of other people, opinion is as efficacious as law; men might just as well be imprisoned, as excluded from the means of earning their bread”.

In my view, Mill exaggerated the impact of public opinion and the consequences of job loss, but he makes a valid point. Advocates of free speech should be concerned about the use of employment conditions to constrain freedom of expression on matters that have little to do with the missions of employing organisations.

It seems to me that advocates of free speech should be encouraging community organisations and corporations to refrain from taking positions on cultural and religious issues that have little to do with their missions. We should continue to acknowledge that employers have the right to sack people who breach their employment conditions. However, we should support voluntary collective action to discourage organisations from imposing employment conditions that unreasonably restrict freedom of expression of employees.

Jim Belshaw has a follow-up post in which he refers to an article by Peter Singer suggesting that the ARU scored an "own goal" by firing Israel Folau. Singer cites Mill in support of free speech: "as John Stuart Mill argued in his classic On Liberty – once we allow, as a ground for restricting someone’s freedom of speech or action, the claim that someone else has been offended by it, freedom is in grave danger of disappearing entirely".
It is great to have common cause with Peter Singer on the importance of free speech, even though I disagree with his radical utilitarianism.

Winton: I agree with the view you express and your argument supporting it.

You've captured them in these two sentences: "It seems to me that advocates of free speech should be encouraging community organisations and corporations to refrain from taking positions on cultural and religious issues that have little to do with their missions. We should continue to acknowledge that employers have the right to sack people who breach their employment conditions."

The Anglophone world in many areas now recalls the culture of the Soviet Union in the "era of stagnation" under the rule of Brezhnev.

Since about the late 1970s, in Australia constraints have grown on freedom of expression as a consequence of a range of economic, political and cultural factors.

While there is more open discussion of many topics than was the case in the mid-20th century (eg on sexuality and other personal matters), constraints are shaping behaviours and expression from high school to mass media, LinkedIn and elsewhere.

There's a shrinking of the commons for open discussion, empowering polarized or radicalised media (eg the Murdoch press), removing debate from politics and handing more and more power to secret dealings by lobbyists.

In these circumstances, with the cloud of ongoing economic uncertainty in Australia, many individuals retreat towards job preservation and self-censorship, Meanwhile oligopolist mass media continues to become less differentiated than it used to be. The shift in media power and control to Silicon Valley shrinks them and adds little.

Despite access to more free information than has ever been available, declining education standards lead to acceptance of what I term placard communication in social media, ie strong opinion expressed with little or no argument or evidence in support.

Without open communication our dark age of persists.

Thanks Noric.
When writing that post my mind turned to the use of employment as an ideological weapon to silence dissent in the communist bloc countries. It was virtually the same as a legal penalty in those countries because of the lack of alternative employment opportunities.

I think you are correct that there has been a shrinking of the commons for open discussion in Australia. The ideal of disagreeing with the viewpoint of an opponent but supporting them in their efforts to present an alternative view seem to be fading. Instead of laughing at people who say you are destined for hell, it now seems acceptable to sack them.

I think those of us who value free expression need to take a stand rather than hiding behind the rights of employers to sack people who breach employment conditions.