How will human values evolve as we approach the social singularity? 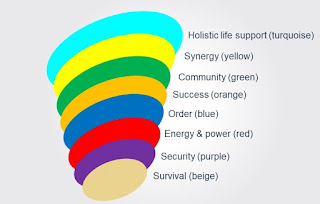 As explained in a recent post, Max Borders has coined the term, social singularity, to describe the transformation in social organisation that could occur following mass adoption of secure networking technologies. Some existing mediating structures could become obsolete, new forms of coordination could emerge and we might collaborate as never before.


In his book, The Social Singularity, Max relies heavily on spiral dynamics to discuss the way cultural values may evolve as we approach the social singularity. Spiral dynamics was developed by the psychologist Care Graves and popularised by Don Beck and Christopher Cowan. It postulates that at different stages of development different values become dominant to help people to function in the life circumstances in which they find themselves.


The spiral is summarised in the graphic shown at the beginning of this post (copied from the toolshero web site). In brief, at first stage of the spiral, survival values are dominant. At the second stage, the dominant values are those of the tribe or clan. At the next stage, we have values related to power, glory and conquest. Then we have loyalty and deference to higher authority. This is followed by the values of science and commerce, and then the ethics of care and the politics of equality.


As we approach the social singularity, prior value systems will be transcended: more people will come to see themselves as interdependent beings, requiring some autonomy and respecting the autonomy of others. Beck and Cowan described the final, holistic, stage as an integrative system that “combines an organism’s necessary self-interest with the interests of the communities in which it participates”.  Max comments:


“This way of seeing the world is neither rugged individualism not crude communitarianism. It requires seeing ourselves through others and others through ourselves”.


What evidence do we have that humanity is heading in that direction? Questions have been raised as to whether spiral dynamics is firmly grounded in evolutionary biology and anthropology, but from the little I know of ancient history it seems to provide a plausible account of the way different cultures have emphasized different virtues. If we look at the economic history of the last few centuries, the story told by spiral dynamics seems consistent with the work of Joel Mokyr and Deirdre McCloskey about the emergence of a culture of economic growth, first in western Europe and then spreading to other parts of the world. The theory also seems consistent with the empirical work of Ronald Inglehart and Chis Welzel on value change, based on the World Values Survey. As noted on this blog a few years ago Chris Welzel’s book Freedom Rising provides evidence that as societies have advanced in terms of technological sophistication and education, emancipative values - relating to autonomy, choice, equality etc. - have more widely shared and the dominant life strategies of populations have shifted from an extrinsic focus on material circumstances to an intrinsic focus on emotional qualities.


That research doesn’t tell us how dominant values might evolve in the years ahead, but Max Borders makes clear that he sees people who are comfortable with subversive innovation – innovation that has potential to replace existing mediating structures including government agencies - as “the standard bearers for a future in which a better world can be dreamed by visionaries, socially constructed, and hard-coded into existence”. Max adds:


“As dreamers and doers, we are prepared to forgo the spectacle of elections and the blood sport of campaign politics. We want to take a vantage point from high above, looking at how we can reweave the latticework of human interaction to create a great reconciliation between private interest and community good."


If we view spiral dynamics and the values of the social singularity in normative terms, Robert Nozick’s suggestion that the pursuit of higher layers of ethics can be thought of as building on the ethics of respect, seems highly relevant. As I noted some years ago, Nozick saw four layers of ethics:


·         The most fundamental layer - the ethics of respect - mandates respect for the life and property of other people.


·         The second layer – the ethics of responsiveness – mandates acting in a way that is responsive to the inherent value of others, enhancing and supporting it, and enabling it to flourish.


·         The third layer – the ethics of caring – ranges from concern and tenderness to deeper compassion, ahimsa and love to all people (perhaps to all living creatures).


·         The top layer – the ethics of Light – calls for being a vessel and vehicle of truth, beauty, goodness and holiness.


Subversive innovation offers a basis to hope that the ethics of Light could one day pervade the cultural values of many humans rather than those of only a few saints and sages.
Posted by Winton Bates at 3:22 PM