Is the cycle of political complacency beginning to turn in the United States? 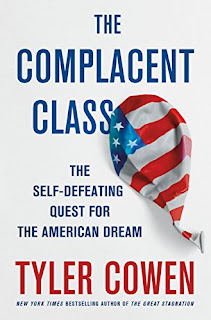 The villain in Tyler Cowen’s latest book, The Complacent Class: The self-defeating quest for the American Dream, is “us”. Tyler is writing about America, but much of what he has written is relevant to other high-income countries. The problem, as Tyler sees it, “is that peace and high incomes tend to drain the restlessness out of people”. Many people have become complacent – “satisfied with the status quo”. Most people don’t like change much and “they now have the resources and the technology to manage their lives on this basis more and more, to the country’s long run collective detriment”.

Tyler has not persuaded me that complacency is a problem of itself. It would be nice to be able to feel more complacent. (According to Tyler’s questionnaire - international version here - I am a striver: “You embrace newness, but you need to strive harder to break the mold”.) As I see it, complacency only becomes a problem when people are complacent about things that they have good reason to be alarmed about.

Tyler provides a fair amount of evidence that Americans have become more complacent. For example:


That is all very interesting. It changes my perceptions about America. I have to get used to the idea that Americans are no longer as mobile and innovative as they were a couple of decades ago. But that does not necessarily mean that complacency is a problem. If peace and high incomes have made Americans more complacent, isn’t that a good thing? There is not much point in striving for more of anything once you are satisfied with what you have already. How is complacency leading to bad outcomes?

When Tyler looks in detail at some of these changing characteristics, he points to the failure of political decision-making to cope with interest groups seeking to protect themselves from change. How does complacency come into that? The NIMBY advocates who are using their political muscle to protect their interests against higher density building can hardly be described as complacent. The people at Donald Trump’s rallies who are supporting his policies to protect jobs - by reducing immigration and constraining import competition - do not seem complacent. The complacency must lie with the general public, who are not yet sufficiently outraged by the stasists to cast their votes for candidates who will constrain their political influence.

Tyler’s discussion of declining geographical mobility provides a good example of political market failure. He points to research showing potential for a substantial increase in GDP if more people were to move from low-productivity cities to high-productivity cities. Regulatory constraints prevent this from happening:
“Residents in Manhattan, San Francisco, and many other high-productivity locales just don’t want all of those new people moving in, and so they have passed overly strict building and land use regulations or in some cases they have limited infrastructure so that adding more residents just isn’t practical. Without good bus or subway connections, for instance, a lot of neighbourhoods just don’t work for people with jobs downtown”.

Tyler uses the terms ‘stasis’ and ‘dynamism’ quite frequently in this book, but I couldn’t find any reference to Virginia Postrel’s pathbreaking book on this topic, The Future and Its Enemies, published 18 years ago (my discussion here). I would have been satisfied with a footnote to explain how Tyler’s views build on, or differ from Virginia’s views. Similarly, it would have been nice to see a footnote discussing the affinity between Tyler’s views and Mancur Olson’s argument that stable societies tend to accumulate distributional coalitions that slow down their capacity to adopt new technologies and reallocate resources. See: The Rise and Decline of Nations.

Early in the book Tyler suggests that “the growing success of the forces for stasis” are linked to complacency. That argument has most force it the final chapters of the book where he discusses politics.

Tyler makes the point that much of the U.S. federal government budget is locked in to spending programs that are politically untouchable. Political change occurs at the margin and is the result of complex battles among interest groups, political manoeuvring and use of public relations campaigns. The Trump administration is unlikely to change this situation much. The pre-allocation of tax revenues will ultimately become unsustainable:
“At some point this country will face an immediate crisis, and there won’t quite be the resources, or more fundamentally the flexibility to handle it”.

Tyler presents a view about the tendency of governments to take on more responsibilities than they can cope with effectively that is similar to the view I expressed in Chapter 8 of Free to Flourish. I argued that there is a growing gap between the expectations that many people have of what democratic governments can deliver and what they are capable of delivering.

However, Tyler seems to present a more optimistic view of the ability of western democracies to reform themselves rather than to collapse and to be replaced by authoritarian regimes. That is just my impression. I find it hard to point to particular passages that support that view. The scenario that Tyler presents of a possible future that would be more dynamic does not feature less dysfunctional government, although smaller government may be implied.

Although I'm not sure why, after reading the book I was left feeling hopeful that the cycle of political complacency has reached its peak and that, over the next few years, American politics might become less shrill and more focused on problem solving. Perhaps the actions of the Trump administration will further erode political complacency in ways that will lead to a public reaction favouring a more constrained role for government. So, democracy will probably survive in the U.S. I’m also reasonably confident that a fiscal crisis in Australia will eventually result in rule changes needed to make democracy sustainable in this country. I’m less complacent about the future of democracy in some of the countries of southern Europe.

Postscript
Tyler Cowan has provided some grounds for optimism in a recent Cato article entitled "Between authoritarianism and human capital". An extract:

"So we’re going to see a kind of intellectual war, and possibly war in other, more violent forms too. That war, using that word in the broadest sense possible, will be between today’s amazing accumulated stock of human capital — and the emotional momentum behind authoritarianism, which is encouraged by the political fraying that stems from underlying fears of disruption.
Right now, I’d still put my money on the positive side of talent and human capital. But in recent times, I can’t say I’ve seen the odds moving in my favor."
Posted by Winton Bates at 2:29 PM