What is the most important thing you have learned in your life?

As I begin to answer this question I am wondering whether it was such a good idea after all. I still have many things to learn and, hopefully, I have a few more years left to learn them. I can claim to have been only moderately successful, so the wisdom I can offer may not be worth a great deal. Readers can make up their own minds about that. Some might think I am on an ego trip, but I am better placed than anyone else to make judgements about my own motives.

The most important thing I have learned in life so far is that when you are thinking about your future performance - in any aspect of your life – you are more likely to achieve to your potential if you think like a player rather than a spectator. That means paying attention to your intentions rather than your expectations. This chart might help me explain. 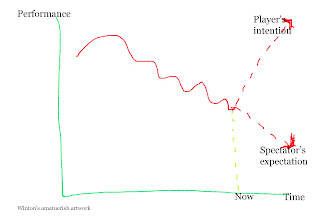 It is counterproductive for a player to go into a game with the mind-set of a spectator - focusing on expectations about the outcome based on past performance. If recent performance has been weak, dwelling on expectations based on past performance will tend to make them become self-fulfilling prophesies.  If recent performance has been strong, over-confidence is likely to get in the way of the focus required for further improvement. It is also distracting for players to be speculating about the judgements that spectators – including coaches and selectors – might be making as they observe the game.

To play well it is obviously necessary for players to focus on their intentions – what they need to do to realize the potential they have displayed in their best past performances. That doesn’t mean trying to exclude the possibility of poor performance from your mind.  It is inevitable for speculations about outcomes to arise in the minds of players. An appropriate response is to acknowledge that you are prepared to accept any outcome, but your focus is on what you intend to do and what that will feel like as you do it. Why not include the intention to enjoy using your skills?

It is obvious that the distinctions between player and spectator mind-sets is important in playing sports, but how widely does this apply to other aspects of life? It seems to me to be important in many aspects of life. An example that came to my attention recently helps to make the point. Here is an extract from an article by Jeff Wise, entitled “To Change YourLife, Learn How to Trust Your Future Self”, published in Science of Us:
“In the mid-1970s, psychologist Stephen Maisto conducted an experiment that would be forbidden today. He gave recovering alcoholics either a spiked punch or a similar-tasting virgin one. He then told half of each group that they’d just consumed alcohol, and the other half that they had not. As you might expect, half the test subjects experienced a sudden surge in craving. But it wasn’t strictly the ones who’d consumed alcohol. Whether they actually had or not, it was the ones who believed they had. The alcoholics who thought they’d had a drink believed that once they fell off the wagon they’d be hopeless, and therefore couldn’t bundle. So they couldn’t.”

In this context “bundle” means to identify with your future self (or your potential). As I see it, the subjects who had a sudden surge of craving, despite having not had any alcohol, had adopted the stance of spectators rather than players. Spectators have sound reasons to expect that when recovering alcoholics fall off the wagon they are likely to become hopeless. The results of the experiment suggest that there is no physical reason why an alcoholic who has had a drink cannot choose to focus on his or her intention to behave more like the person he or she wishes to become.

I learned about the importance of distinguishing between player and spectator mind-sets about 14 years ago when trying to help myself to become more fluent when speaking in public. As a child I developed a severe stutter and was unable to say more than a few words without blocking. My fluency improved greatly in my teen years, but I still had a tendency to block when it seemed most important to speak fluently e.g. in public speaking situations.
Looking back now, it seems obvious that I was tripping myself up by adopting a spectator mind-set. I was overly concerned about how the audience would judge me if I blocked. On the basis of past performance there was a high probability that I would experience disfluency, so that was what happened.

I experienced fewer problems after I began to focus on how I intended to speak, and learned how to trust my ability to speak fluently. It is certainly desirable for public speakers to have regard to audience reaction, but they do this most effectively when they focus on their own intentions – whether they are attempting to entertain, inform, persuade or inspire the audience. Spectators still see still see plenty of room for improvement in my public speaking performance – but I get a great deal of satisfaction from knowing how far I have come!

I am not sure where I picked up the distinction between player and spectator mind-sets. The related distinction between acting according to intentions rather than expectations came from an article by John Harrison, a public speaking coach who was once a stutterer, entitled “How expectationscan sink your ship”. I can remember reading about perceptual positions in NLP and Neuro-Semantics literature, but the idea of the player/spectator distinction, as discussed above, might have come from Tim Gallwey’s inner game books. Gallwey’s equation: performance equals potential minus interferences, is certainly highly relevant. The interference Gallwey was writing about comes from the inner coach (Self One) who is constantly distracting the player by telling her or him to be careful not to make a mistake. I found sporting metaphors from Tim Gallwey’s books – particularly The Inner Game of Golf - a great source of inspiration. (The Inner Game of Golf might even help me to improve my performance on the golf course if I played more frequently.)

Perhaps the second most important thing I have learned in life so far is that if you are having difficulty in understanding or explaining a problem it often helps to think of a relevant sporting metaphor.
Posted by Winton Bates at 12:37 PM

I read this a few weeks ago and I still can't answer what the most important thing I have learned is! Still thinking it over.

I'm still struggling to figure out what the most important thing I have learned is!

I can offer a suggestion: "For what can be more pleasant than wisdom itself, when you consider the safety and contentment of everything that relies on our mind's understanding and knowledge?" Marcus Aurelius.
I imagine that as you read this you will be thinking of more important things that you have learned.