Does your constitution mandate free trade?

The Constitution of Australia, like that of the United States, mandates free trade – up to a point! Both constitutions mandate free trade between the states, and leave federal governments free to impose barriers to international trade to the extent that they wish.

It is debatable whether a constitutional requirement for free international trade would have made a huge difference to trade policy in either country. The requirements for free trade between the states have not guaranteed free trade between the states - judges have not always ruled against trade barriers imposed by states to protect local interests. Many judges seem to capable of being highly imaginative in their interpretation of concepts such as free trade.

The relevant constitutional question is whether free trade is mandated by the real constitution - the set of dispositions that influence what most citizens will accept as legitimate actions by politicians and bureaucrats who make up the government. That depends ultimately on the views of individual citizens.

Why should your constitution mandate free trade?  I hope you share with me the belief that individuals have a natural right to engage freely in mutually beneficial transactions with one another, even though third parties may be disadvantaged. If so, you would probably consider it to be objectionable for a government to levy a discriminatory tax on the sales of the producer from whom you wish to purchase, in order to encourage you to purchase from a rival producer. You may well assert that you have a right to choose to buy from whatever source you wish, for whatever reasons you might have, free from any such third-party interference.

The logic of this argument does not cease to apply merely because buyers and sellers may be separated by national borders. National borders are artificial constructs that do not alter the natural right of individuals and firms to engage in mutually beneficial transactions. Donald Boudreaux has written persuasively on this topic: “International Trade Is Simply One Manifestation of Competition”.

Should an exception be made in situations where foreign governments subsidize their exports? No, if foreigners are sufficiently misguided to subsidize their exports there is no reason why domestic consumers should not benefit from any price reduction that this causes. In a market economy, if foreign subsidies result in an expansion of total imports, this can reasonably be expected to result in exchange rate and relative price adjustments to make exporting more profitable and bring about an expansion of exports. Production for the domestic market that is displaced by increased imports will be offset by increased export production.

Some economists still, no doubt, maintain that unilateral free trade is not optimal on grounds such as the optimal tariff argument, and the potential for the use of existing trade barriers as bargaining chips to obtain better access to foreign markets. Policy advisors who recommend departure from free trade to obtain such gains risk opening the way for much larger economic losses because they are dealing with fallible real-world governments, rather than the omniscient and benevolent governments assumed to exist in their economic models. In the real world of politics every departure from a simple rule opens up opportunities for interest groups to advance their interests at the expense of the broader community.

However, there is one argument that makes it difficult for the real constitution to mandate free trade. With great reluctance, I am now willing to concede that it may be becoming more difficult for politicians to endorse free trade because many people are choosing to cast their votes for candidates who oppose it. Even though the gains from free trade vastly outweigh the losses, the uneven distribution of losses makes the outcomes of free trade seem unfair to many people. A substantial proportion of voters in many countries now seem to be saying that their disposition is to favour protection of existing jobs rather than the opportunities that free trade offers.

Over the longer term, the pursuit of policies to preserve existing jobs will, of course, be inimical to the specialization and technological progress which provide the basis for everyone’s future prosperity. Nevertheless, many voters and their representatives seem to be more concerned to preserve existing jobs than to promote future prosperity. Our democratic systems seem to be mutating from systems of social cooperation to promote the interests of everyone, to arenas for the “war of each against all” that Thomas Hobbes imagined as the only alternative to an all-powerful dictator “to keep them all in awe”. Are we powerless to prevent this war of each against all? 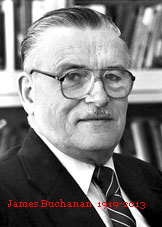 This poses the kind of constitutional dilemma discussed by one of the 20th Century’s best economists, James M Buchanan, in The Limits of Liberty: Between Anarchy and Leviathan, 1975. Buchanan wrote:
“If there exist potential structural changes in legal order which might command acceptance by all members of the society, the status quo represents a social dilemma in the strict game-theoretic terminology. Even if we consider ourselves far removed from the genuine Hobbesian jungle, where life is brutish and short, the status quo contains within it elements or features that are in principle equivalent. Life in the here and now may be more brutish than need be, and certainly more nasty. If after examination and analysis, no such potential for change exists, the legal-constitutional order that we observe must be judged to be Pareto optimal, despite the possible presence of discontent among specific members in the body politic”.

Buchanan was particularly concerned about ways to reform the rules of the political game to promote fiscal responsibility. That problem has worsened since the 1970s. The type of reforms he hinted at involved agreement by those who sense that they are vulnerable to having wealth expropriated via the political process to a mechanism for limited wealth transfer on condition that others agree to rules that overtly limit governmentally directed fiscal transfers.

I doubt whether rules to promote fiscal responsibility are feasible in the absence of a broad consensus concerning the role of government in distribution of the benefits from economic progress. Perhaps that is also a context in which the real constitution can mandate free trade. Current proposals being advanced in various quarters for guaranteed minimum incomes are relevant to this discussion. It seems to me, however, that proposals to ensure widespread opportunities for those displaced by import competition and technological change to improve their skills, and earn higher incomes, are probably more deserving of support. I might try to spell out reasons for that view in a later post.
Posted by Winton Bates at 3:05 PM