Will the Swedes maintain their positive attitudes toward non-European immigration?

Attitudes toward non-European immigration are much more positive in Sweden than in other EU countries. This is illustrated in the following chart, based on a Eurobarometer survey. 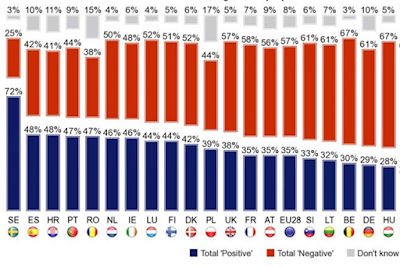 The high proportion of Swedes who have positive attitudes toward non-Western migration sits somewhat oddly with the difficulty that Sweden has had in integrating such migrants. That is apparent in Michael Booth’s book, The Almost Nearly Perfect People, which I began to discuss in my last post. Booth writes of “newly arrived immigrants being shunted off to places like Rosengård, where they are given just enough money to live on but often face insurmountable obstacles to progressing further in society”. He suggests that the Swedish welfare state creates “ghettos” for “clientification” of new arrivals. I guess clientification has come to describe the process by which people become dependent upon welfare because government welfare agencies pretend to run businesses in which welfare beneficiaries are viewed as clients.

Michael Booth notes that newly arrived migrants becoming dependent upon welfare is in sharp contrast to the situation in the US, for example, where immigrants generally have to work hard to survive. That comment presumably refers specifically to illegal Mexican immigration into the US. It brings to mind Milton Friedman’s comment to the effect that illegal Mexican migration is a good thing because illegal immigrants are not eligible for welfare benefits. Friedman also made the more general point that it is not possible for a welfare state to maintain open borders because that would disproportionately attract the kinds of migrants who are likely to become eligible for welfare benefits. (He was, of course, more favourably disposed to open borders than to welfare states.)

It is worth noting at this point that immigration programs are sometimes seen as making a net contribution to welfare systems. Immigrants to Australia have tended to be of working age and to have useful skills, so that, on average, their tax contributions have tended to exceed the welfare payments made to them. That probably reflects immigration policies designed to attract migrants with useful skills and would not apply under an open-borders policy with migrants immediately eligible for welfare benefits.

It would be difficult for anyone to argue that the ongoing positive attitudes of the Swedes toward non-European immigration stems from social cohesion that has been created by the welfare state. The Scandinavian countries with less positive attitudes to immigration also have large welfare states. Moreover, the weight of evidence seems to support the view that high levels of trust and social cohesion in the Scandinavian countries prepared the way for the welfare state, rather than vice versa. Michael Booth tends to support that position – he reports interesting interviews with protagonists on both sides of the debate.  The international evidence that I have presented in an earlier post supports the view that people in high trust societies tend to have greatest support for moving toward a more humane society, with more redistribution of income to reduce inequality.

Michael Booth makes the point that many Danes take pride in the fact that they pay a lot of taxes. This is apparently a way for them to say how successful they are. Booth notes that the pride that Danes take in paying tax does not prevent them from evading tax by shopping enthusiastically on the black market. Evidence from a tax audit suggests that many Danes also engage in income tax evasion when they have an opportunity to do so.

It would be reasonable to expect that a high proportion of Danish taxpayers are proud of the support that they provide to other Danes who rely on welfare payments. High levels of inter-personal trust would be likely to make such sentiments more common in Denmark and other Scandinavian countries than in most other parts of the world.

However, different attitudes seem to apply in Denmark when tax revenue is used to pay welfare benefits to newly arrived migrants. In recent years Denmark has taken the path of applying a two-tier welfare system with different provisions for new arrivals. Denmark has also adopted a more restrictive approach to immigration.

This brings me to politics. The Danes, Norwegians, Finns and Swedes all have anti-immigration parties that poll a substantial proportion of the popular vote (over 20 percent for the Danish People’s Party). The Swedish Democrats have been less influential than the xenophobic parties in the other Scandinavian countries. They obtained a lower percentage of the vote (13 percent in the last election) but the main reason they have been less influential is because they have been shunned by the other parties in Sweden. My source for this information is an article by Alberto Nardelli and George Arnett on the rise of the anti-immigration parties in the Nordic States (published in The Guardian, 20 June 2015).

I hope the vast majority of Swedes will continue to set an example to the rest of the world by maintaining strongly positive attitudes toward non-European immigration. However, that looks to me to be a forlorn hope - unless they can find a sensible way to restrict welfare benefits to immigrants (perhaps accompanied by special policies to assist refugees to find jobs). In my view, other countries, including Australia, should also consider moving toward a two-tier welfare system. Immigration to countries with costly welfare systems has a lot in common with having new members join a club that exists to provide benefits collectively to its members. It is much easier for current members to remain positive about having new members join if they are required to make appropriate contributions before being eligible for the full benefits of membership.