Why donate through Opportunity International Australia?

It must have been over 15 years ago when I first began making modest monthly donations to Opportunity International Australia. Opportunity is a microfinance organisation that provides small loans to help people in low-income countries break the poverty cycle by starting their own small businesses. It also offers its clients other financial services including savings accounts and insurance.

What attracted me to Opportunity the most was the potential for money donated to be recycled to help more people as loans are repaid. Over the years I have obtained satisfaction from the information that Opportunity has sent me about transformations that have occurred in the lives of individuals who were being helped. There have been many heart-warming stories about donations being used in ways that help poor people, mainly women, to build better lives for themselves and their families.

Nevertheless, the sceptical old economist in me has been muttering that he would like to see such stories backed by more empirical data showing how the economic and social prospects of Opportunity’s clients have improved as a result of the help that they have been given.

The enthusiasm of development economists for microfinance seems to have waxed and waned over the years, but recent research findings suggest that it can be an effective way to expand the opportunities available to people living in poverty who would otherwise be unable to obtain credit (or would have difficulty servicing loans at interest rates reflecting the high credit risks conventionally perceived to be involved). One particular study I have in mind, undertaken by Shahidur Khandker and Hussain Samad for the World Bank, uses over 20 years of panel data for Bangladesh. This study found that microcredit programmes resulted in increases in income, expenditure and net wealth, and increased participation in education. The results suggest that microcredit has been a particularly effective tool for reducing poverty among women.

In terms of global microfinance, the Opportunity International Network is a relatively small player, but a recent Social Performance Report indicates that it now has 3.6 million loan clients and its gross loan portfolio stands at $US 841.6 million. As indicated in the chart below, most of those loans have been made to India and other parts of Asia. 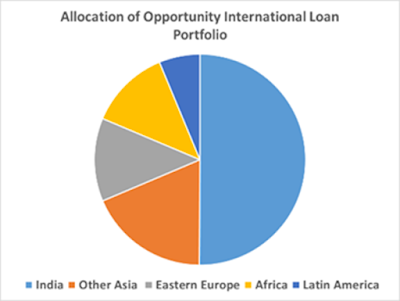 Those priorities seem appropriate from an Australian supporter’s perspective, but I would personally like to see Opportunity also establish a presence in Papua New Guinea.
Information in the Social Performance Report also indicates to me that Opportunity has been fairly effective in targeting assistance to those whose needs are greatest. A high proportion of new clients have been living in poverty, using $2.50 per day as the benchmark; new clients often have had no previous access to loans or savings facilities with a financial institution; and 94% of clients are women.

Information on the impact of loans and other assistance is currently patchy, but efforts are being made to develop appropriate indicators. The Social Performance Report provides evidence of a substantial reduction in the proportion of clients in poverty in the Philippines and of substantial job creation in clients’ businesses in African countries. One statistic which must imply impressive economic performance by clients is the repayment rate of loans – it is reported that 98% of Opportunity loans are repaid.

Rather than rounding off this post with a conclusion that any two-handed economist might be proud of, I want to do something I have never done before. I urge readers to spare $6 or more (hopefully much more) each month to make a regular donation to Opportunity. You might get a warm inner glow by giving money to other charities, but it would be hard to find anything more deeply satisfying than giving a hand-up to poverty-stricken people who seeking to build better futures for themselves and their families.
Posted by Winton Bates at 7:29 AM