How close is the relationship between freedom and life satisfaction?

I would be happy to declare myself a fan of the OECD’s Better Life index if it included an appropriate indicator of freedom. Perhaps the authors might argue that freedom is adequately covered by “civic engagement”. However, that seems like arguing that it is not possible for people to suffer persecution from government when they have the right to vote. I don’t think J S Mill would have been impressed:
“The limitation … of the power of government over individuals, loses none of its importance when the holders of power are regularly accountable to the community, that is, to the strongest party therein” (On Liberty, Chapter I).

Perhaps the authors of the index see freedom as a characteristic of the social environment that people desire because it enables them to have greater life satisfaction, rather than as one that contributes directly to the quality of life. I don’t buy that argument. Humans have a passion to control their own lives (even though many have no qualms in voting to have governments restrict the freedom of others). I predict that many users of the Better Life index would give a higher weight to individual freedom than to many of the other items included in the index, if they were given the opportunity to do so. (One of the features of the Better Life index is the ability of users to assign whatever weights they choose to the variables that are included in the index.)

The relationships between life satisfaction and the two freedom indexes are shown in the charts below. 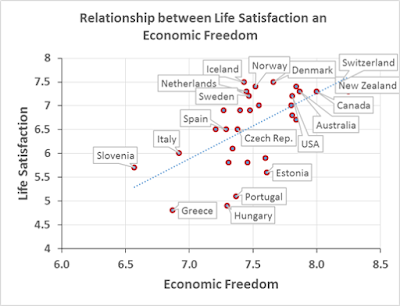 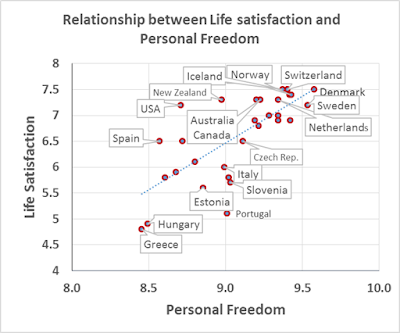 There seems to have been a fairly strong tendency for people who argue that government policies should be directed toward raising average life satisfaction to advocate policies involving restrictions on freedom. Such people have been barking up the wrong tree. The countries with highest average life satisfaction are those with the least restrictions on economic and personal freedom.