Which countries have the greatest personal and economic freedom these days?

The results of the latest Human Freedom Index by Ian Vásquez and Tanja Porčnik (published by the Fraser Institute and several other policy think tanks) have surprised some people.

In order to better comprehend the rankings of particular countries I have used conditional formatting  to prepare the table below showing the components of personal freedom and economic freedom ratings for the 50 countries assessed to have the highest overall freedom ratings. For each component index green denotes a relatively high rating, yellow a moderate rating and red a relatively low rating. 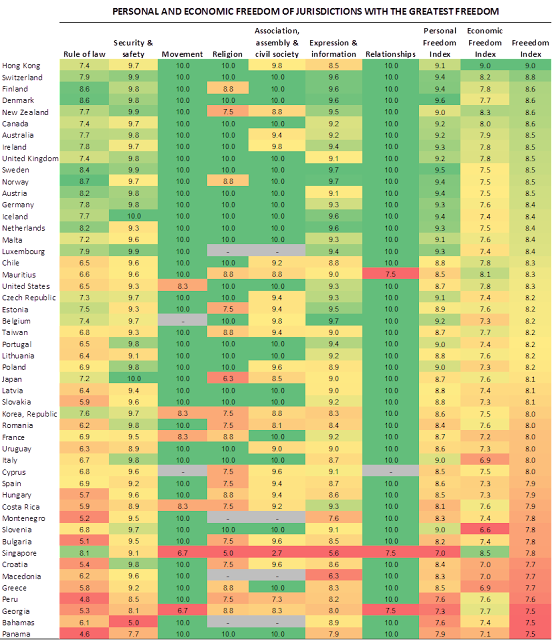 It seems that the US has a relatively low rating on rule of law and freedom of movement.  The US ratings on the three components of the rule of law index - procedural justice, civil justice and criminal justice – are all rated as more than 20% below the world’s best practice. (Data are from the World Justice Project, an independent non-profit organization, originally founded in 2006 as a presidential initiative of the American Bar Association.) The US’s low rating on freedom of movement is attributable to restrictions on foreign movement i.e. freedom of citizens to leave and return to their country. (Data are from the CIRI Human Rights Data Project.)

Another surprising item highlighted in the table is the relatively low rating of New Zealand on freedom of religion. This low rating apparently reflects some kind of restriction on freedom to establish religious organisations.

The relationship between economic freedom and personal freedom is interesting. The chart shown below suggests a fairly strong correlation, but there are some interesting outliers. 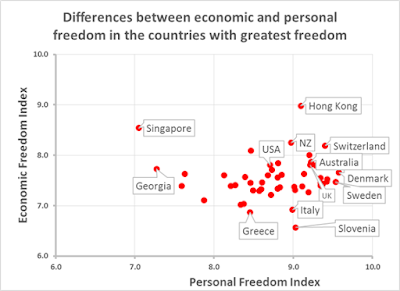 It is really surprising to know the worlds most developed and powerful country,USA is ranked 20 and 30 in terms of personal and economic freedom. But my doubt is, whenever, the president of USA delivers a speech in and outside the country, he stress so much on freedom, rights, justice and open society. What might be wrong in the country if the policy is focused on the personal and economic freedom, but the outcome seems to be going in another direction. I would really like to know this.

That is a very good question, Yeshi.