Should researchers recognize that emotional states are influenced by life evaluations?

There is nothing novel about the idea that people who have a positive frame of mind about the opportunities and challenges that life offers tend to experience positive emotions as they go about their daily lives.

We are not surprised that people who smile and laugh a lot, obtain enjoyment from whatever they are doing, feel they are learning or doing something interesting and feel that they are treated with respect tend to rate their lives highly. If such people don’t consider their current lives as close to the best possible, it is likely to be because they are optimistic about the potential for their lives to get even better. It might be reasonable to suppose that their positive emotions reflect frames of mind stemming from their dispositions and their evaluations of their lives as well as from their current experiences.

The question posed in this post is linked to the finding in my last post that average positive emotion ratings in countries in the former Soviet Union are lower, while those in Latin American countries are higher, than might be expected on the basis of negative emotion ratings in those regions. I suggested that the most likely reason for this was the development of shared frames of mind by people in those regions. That poses the question of whether these shared frames reflect life evaluations or something more profound.

Which variables should be included in a regression model to assess the influence of frames of mind on positive emotions at a national level? The most obvious measure of positive emotions to use is the Gallup measure which reflects the extent to which people are well-rested, smile and laugh a lot, obtain enjoyment from what they are doing, are learning or doing something interesting and feel that they are treated with respect. It seemed appropriate to include the Gallup measure of negative emotion (reflecting pain, worry, sadness, stress or anger) as an explanatory variable to take account of experience that might lead people to have a negative frame of mind. Regional variables were included for reasons just discussed. Gallup data was used to reflect average life evaluations at a national level (Cantril ladder).

Three other frame of mind variables were included because they have previously been found to be significant determinants of both life evaluation and positive emotion ratings. (See, for example, the research by John Helliwell and Shun Wang presented in Table 2.1 of Chapter 2 of World Happiness Report 2013.) These variables were satisfaction with freedom, perceptions of social support and generosity. All data was obtained from the online appendix to Chapter 2 of the World Happiness Report.

Separate regional variables were included in the initial regressions but only Latin America, the Former Soviet Union, Central and Eastern Europe and Middle East and North Africa were found to be significant. The final regression model explains about 70 percent of the variation in positive emotion at a national level. The results of the analysis are reflected in the Figure below. (All estimated coefficients were significantly different from zero at the 95% level. Further information can be made available on request.) 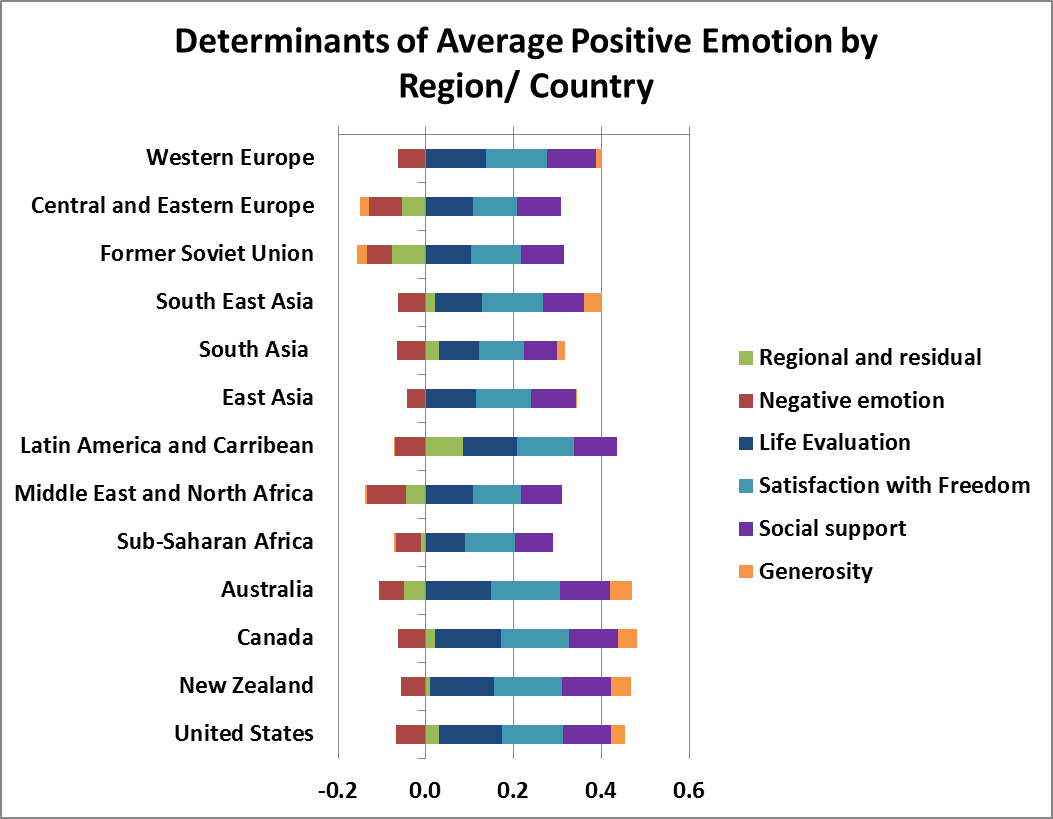 Two important points are evident from the Figure:
Postscript 1:

I acknowledged above that frames of mind can stem from dispositions as well as from life evaluations. In retrospect, I should also have noted that dispositions can affect life evaluations.
A paper just published by Eugenio Proto and Andrew Oswald explores the role of genetics in influencing average life evaluations at a national level (“National Happiness and Genetic Distance: A cautious exploration”, July 2014, IZA DP 8300). The paper suggests that genetic distance from Denmark is a significant determinant of life satisfaction.
If the genetic influence on disposition had an impact on positive affect in addition to its influence on life evaluations (and other variables including negative affect and regional variables) that should be reflected in the residuals of the regression described above. However, the residuals for Denmark and countries that are genetically close to Denmark (Norway, Sweden, Czech Republic, Austria and Switzerland) are small and mainly negative.

Postscript 2:
Inclusion of genetic distance from Denmark in the regression analysis made little difference to the results obtained. The coefficient on the genetic variable had the 'wrong' sign and was not significantly different from zero. The results suggest that any genetic influence on positive affect occurs via life evaluations and other variables.

Postscript 3:
Research by Gian Vittoria Caprara, Nancy Eisenberg and Guido Alessandri on the dispositional basis of happiness is relevant to this post. The authors note that life satisfaction, optimism and self-esteem have recently been traced to a common disposition, namely positivity. The authors' measure of positivity reflects all these factors. Their research suggests that positivity predicts future positive affectivity, rather than vice versa.