Is the wellbeing of New Zealanders startlingly low?

A headline that appeared in the media a few weeks ago suggested that the wellbeing of New Zealanders is startlingly low by comparison with many other countries. The report was based on the inaugural ‘Sovereign Wellbeing index’ developed by the Human Potential Centre (HPC) of Auckland University of Technology (AUT). It suggested that when compared with surveys of 22 European countries using the same set of measurements, New Zealand ranked near the bottom. New Zealand ranked ahead of only Hungary, Bulgaria and the Ukraine and far behind Norway, Switzerland and Denmark, the top ranked countries.

The project leader, Grant Schofield, professor of public health at AUT, was reported as saying:
‘I hadn’t expected New Zealand to be best, but I hadn’t expected we’d do as badly as we did. I think it comes down to our comparative lack of social connectedness and the fact that the gap is growing between the haves and have-nots. We’re not even the fair society we once thought we were’.

I am also surprised by these findings. In fact, they seem to me to be anomalous. Previous studies have shown that subjective well-being measures tend to provide a more favourable view of the well-being of New Zealanders than is provided by comparison of average incomes levels.

The study uses the methodology of the European Social Survey (ESS) which views wellbeing in terms of how people feel (pleasure, sadness, enjoyment and satisfaction), and how they function (sense of autonomy, competence, interest and meaning or purpose in life). I support such measurement of wellbeing as long as it isn’t used to imply that improving wellbeing ought to be an over-riding objective of public policy. My view, as argued on this blog and in Free to Flourish, is that pursuit of happiness is primarily a matter for individuals (and their families and friends) rather than a public policy issue.

There are some aspects of the ESS approach to measurement of wellbeing that seem to me to be less than ideal. For example, it seems to me that in considering social support that is available to individuals it is important to know whether there are people whom they can count on to help them in times of need. Instead of asking about that, the ESS asks whether people in the local area help each other or feel close to each other. In modern societies, the people whom individuals rely on for social support – including family and friends – do not necessarily live in the local area.

However, I don’t think shortcomings of the ESS methodology can explain why the HPC/Sovereign index shows the wellbeing of NZers to be startlingly low. The responses of New Zealanders in this survey imply much lower wellbeing than in other surveys that have asked similar questions. For example, the following chart shows that the HPC data for New Zealand is an outlier when compared with the general relationship between responses to the ‘Satisfying life’ question of the ESS and the Gallup World Poll question that asks respondents to rate their ‘life today’ against the best possible life. 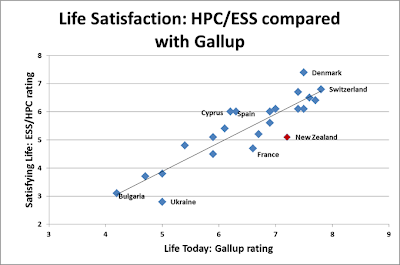 Another example is provided by comparing responses to the question of whether respondents consider themselves to be treated with respect in the ESS and the Gallup World Poll. Similarly, in that context the HPC data is an outlier in that context. 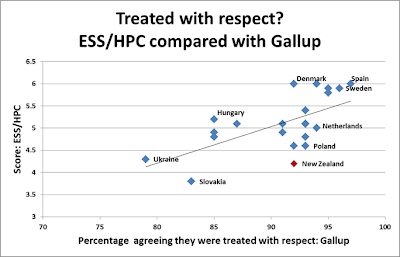 I don’t know why the Sovereign/HPC survey is showing the wellbeing of New Zealanders to be lower than other surveys of subjective wellbeing. Perhaps their survey is more accurate than previous surveys. However, until we know why the results of different surveys differ so much, we should, perhaps, not give much credence to claims that the wellbeing of New Zealanders is startlingly low.
Posted by Winton Bates at 4:38 PM