‘So, you think I am in favour of occupying Wall Street, do you? What makes you think that?’

I knew it was Jim as soon as he spoke, but it took me a moment to work out where his voice was coming from. When Jim wants to have a discussion with you, he seems to appear from nowhere and just start asking questions. I suppose he thinks that gives him some kind of advantage. It doesn’t work! Everyone I know just ignores his opening questions and goes through the usual preliminaries of saying hello and asking after his health while they compose a response.

Jim had obviously read a brief comment on my last post in which I had speculated that he might be in favour of occupying Wall Street, but not Sydney. I reminded Jim about our previous discussions about banking and limited liability. In our previous discussion about banking Jim had suggested that it was a scam for banks to promise to repay deposits on demand even though they knew that they would be unable to meet that promise if all depositors asked for their money at the same time. In our discussion about limited liability, Jim had suggested that it was wrong to allow owners of banks to gamble with borrowed money, secure in the knowledge that if their gambles do not pay off then the most they stand to lose is the value of their shares. I also mentioned that when banks have been declared by governments to be ‘too big to fail’, bankers have a strong incentive to take abnormal risks because they know that they will be bailed out by governments if they make large losses. I ended by telling Jim that I could picture him in Wall Street carrying a placard saying ‘Bankers are Wankers!’.

Jim seemed satisfied with my explanation, but when I had finished he asked: ‘So, doesn’t all that apply to Australia as well as the US? Don’t you think I should be in favour of occupying Sydney, too?’

I tried to explain that prudential regulation seems to have worked reasonably well in Australia, so there doesn’t seem to be much to protest about in terms of the way the financial system is working in this country.

Jim’s response was quite robust and is not quotable verbatim. After deleting expletives I think the message he was giving me was that although I tell people that I am a libertarian, he thinks I am actually a neo-socialist because I am in favour of some prudential regulation of the finance sector. (Jim can call me a neo-socialist if he likes – it makes a change from being called a neo-liberal. My views on banking regulation are actually fairly close to those of Adam Smith, so I am in good company.) Jim ended his outburst by telling me that while I was entitled to my own views, I should refrain from misrepresenting his views.

‘Well, does that means you actually support the Occupy Sydney movement?’, I asked. 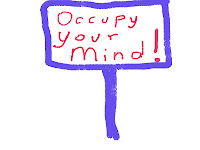 Jim didn’t respond for a long time. Eventually, he asked, ‘What are the Occupy Sydney people actually on about?’ I wasn’t sure, but I suggested that the main theme of the Occupy movement all over the world seemed to be the injustice of unequal distribution of wealth and power – particularly the idea that the top 1% of the population in many countries tend to benefit disproportionately from economic growth.

‘And who do you think is responsible for that?’ Jim said. ‘It is the 99% who are responsible for making the 1% wealthy. We make a few film stars fabulously wealthy by going to the movies that they star in. We make a few sporting heroes fabulously wealthy by watching the games they play and buying the products they endorse. The same system applies in the business world. The CEO of a successful company develops a reputation as a star performer just like film stars and sporting heroes. Successful companies are only successful because the 99% buy the goods they produce’.

‘So’, I said, ‘you don’t think there is anything to protest about?’
Jim said, ‘No, that’s not what I mean. The Occupy Movement should be protesting about celebrity culture and the vacuousness of consumerism. They should be poking fun at the idea that a good is worth buying just because it is popular and that entertainment is worth watching just because the performer is a star. They should be asking people whether they actually get pleasure by helping Kim Kardashian to become wealthier’.

I was left wondering why Jim was picking on Kim Kardashian. One possibility that crossed my mind is that she might have green hair. Jim doesn’t like green hair.
Posted by Winton Bates at 4:48 PM

Thanks Nicola, but I was hoping to start a conversation.
For example, do you think Jim's theory of income distribution is too simplistic?

In my opinion there Jim's theory of the 99% making the 1% rich is perhaps true as I believe in the power of the people. I believe that when the 99% choose to stop doing this things will change. I live in hope that people have the ability to challenge the present injustice of the wealth divide. I think inequality leads to an underlying unhappiness in people as people enjoy contributing and giving more than they enjoy taking. In my opinion we need to flip our system of taking as much as you can to giving as much as you can as it makes us happier. That is my thought for now anyway... the very short moment I can grab.

Also like Jim, I don't get the Kim Kardashian thing. I still can't work out why people are interested.

nice post :) I've found lots of nice work on your blog. thanks a lot for sharing with us.

Nicola: Thanks for responding.

I am not sure how Jim's theory is consistent with a sense of injustice about wealth distribution. I suppose a lot of people feel that the distributional outcome should be merited in some sense. Yet few complain about governments sponsoring lotteries - systems to randomly select a few people to become rich.

I feel a sense of injustice about the wealth distribution as I think many people have taken advantage of their professional positions and exploited people. This is certainly true in the UK where I was when the GFC hit. I was amazed at the irresponsibility of many people in the banking sector and subsequent bail-outs by the government and now I continue to be concerned with the consequential impact on UK society.

I think there was the same irresponsibility here but as you mentioned it was better regulated. However, it is certainly not without people in positions of responsibility exploiting the system, such as the corruption charges against the Reserve Bank of Australia.

Globally, I think the wealth divide is too large and there is too much power concentrated in too few hands. This power and wealth concentration seems to inevitably lead to an abuse of the power and exploitation of people and the environment.

However, I also see the same irresponsibility can be with people who are part of the 99%. I think we all need to assess our values and principles and act to turn off the Kim Kardashian show and start understanding what is really happening in the world.

I can certainly understand why people feel that the bank bailouts were unfair.
It is unfair that some industries/corporations are able to exert political influence to obtain benefits at the expense of the rest of the population. I am not sure to what extent that explains why the bank bailouts occurred - bailing out the banks probably seemed to the government to be desirable to contain the spread of the GFC. However, it seems plausible that excessive political influence of the big banks explains the shortcomings of financial regulation in the US prior to the GFC.

I suppose the interesting thing about GFC was that many of the people who were responsible for it were people who had huge status in society. This was embodied in both in their job title and material trimmings. However, when the GFC occurred their motivations and behaviour became exposed and we could see them for what they were which was at best irresponsible and reckless and at worst corrupt criminals. So my suggestion is this could imply that how we construct status in our society is flawed and destructive.

Did you know about the bailouts of NAB and Westpac? Why were they kept secret?

I expect that what was happening was that other sources of lending had dried up, but the Fed had stepped in to keep the system liquid - so our banks borrowed from the Fed.
I wouldn't be surprised if something similar might happen as a result of the European crisis. When normal inter-bank lending dries up as a result of loss of confidence, central banks step up to the plate to keep the system working. That is why we have central banks.
I can't claim to know much about this, but I think there is an important distinction between a situation where a central bank provides funds so banks can continue to lend and a situation where banks have to be re-capitalized because they are about to become insolvent.

Yes. Maybe central banks needed to step in but why all the secrecy and the assurance that Australian banks were so robust in the first GFC? When they were not?

I think David Malone author of Debt Generation and Paul Craig Roberts an ex-editor of the Wall Street Journal have some interesting comments on the Europe situation:

I still think the Australian banks were in relatively good shape during the GFC - not much exposure to sub-prime and substantial reserves. I don't know why they qualified for loans from the Fed.
The articles you referred me to were interesting.
One of the points that seems to be missed in a lot of the discussion is that it is important to distinguish between the central bank action to buy up dodgy bonds to bailout the banks and the profligate governments that have issued those bonds, and central bank action to buy good quality bonds etc in order to prevent deflation of the price level and a deep recession.
The first type of bond buying seems to me to be pretty silly and the second type seems to me to be very sensible (within limits).