Would we be more satisfied with life if we lived in the best of all possible worlds?


My point is not that life in Australia is close to the best possible, but that life satisfaction may not be a reliable indicator of whether our lives are getting better. If we lived in the best of all possible worlds, many of us would have greater opportunities than we have now and would take advantage of those opportunities to achieve better lives. However, since most of us would adapt fairly quickly to our new lives, average life satisfaction would not be much higher than it is now. We would readily acknowledge that our lives had improved, but our level of contentment would not be much greater.

Why do I think that? Well, take a look at the ABS web site showing Measures of Australia’s Progress. The picture presented there is of improvement in many aspects of well-being over the last decade, including health and education as well as income. The negative outcomes are in respect of environmental outcomes that tend not to be at the front or our minds when we think of our personal well-being. (In the best possible worlds our consciences might be more troubled by negative environmental impacts of our actions, but this would have led us to reduce such impacts.) On balance, the indicators suggest that the personal well-being of most Australians has improved substantially over the last decade.

Now, take a look at the chart below showing what has happened over the last decade to average life satisfaction and the personal well-being index produced by Australian Unity and the Australian Centre on Quality of Life. The life satisfaction rating is derived by asking respondents to give a rating from 0 to 10 in response to a single question: ‘Thinking about your own life and personal circumstances, how satisfied are you with your life as a whole?’ The personal well-being index is the average of satisfaction for a range of life domains including standard of living, health, achieving in life, personal relationships, feeling part of the community and future security. 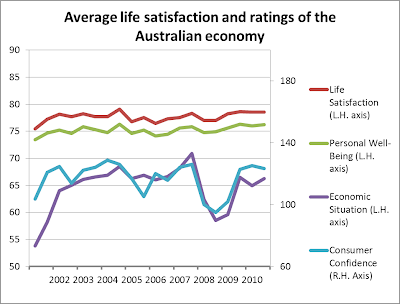 Australians were apparently more satisfied with life than usual at the time of 2004 Olympics and less satisfied than usual during the onset of the global financial crisis, but there is not much change in either index over the decade as a whole. The same survey asks respondents how satisfied they are with the economic situation in Australia. Ratings of the economic situation fluctuate far more than the life satisfaction responses, but there is still not much evidence of an upward trend reflecting the growth in real income levels over the decade.

The chart also shows that ratings of the economic situation have fluctuated more or less in line with the consumer confidence index produced by Roy Morgan research. This consumer confidence index is constructed from answers to questions about current economic conditions and economic conditions over the next five years as well as family finances and whether or not this is a good time to buy major household items.

The following chart shows how responses to the question about economic conditions over the next five years have fluctuated in the recent past. Over the last year or so, a lot of us have tended to become more pessimistic about the economic outlook. 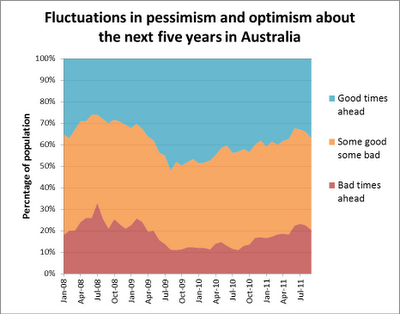 Fortunately, our satisfaction with our own lives does not fluctuate to the same extent as our assessments of the economic situation. Both types of measure have the same deficiency, however, as indicators of progress or regress. When we are asked to rate our own lives or the state of the economy we tend not to look back and reflect upon changes that have occurred unless we are asked explicitly to do so.

The Gallup World Poll asks respondents to rate their lives five years ago and five years ahead as well as their life today, all relative to the best possible life. The results provide an indication of whether survey respondents perceive that their lives are getting better. The average rating Australians give for their current life in 2011 is 7.4 and their rating of life in five years is 8.0 . In 2008, Australians rated their life five years previously at 6.8 . I don’t know why the data is so patchy, but it does suggest, nevertheless, that Australians perceive that their lives have improved over the last decade.
Posted by Winton Bates at 5:21 PM