Is the social fabric stronger when a high proportion of the population identify with helping the people nearby?

In my last post I presented some evidence that people who do not identify strongly with ‘always behaving properly’ nevertheless tend to identify strongly with helping the people nearby if they feel a great deal of freedom and control of their own lives (i.e. if they have strong feelings of individual agency).


Does an identification with helping the people nearby have a positive effect on the social fabric or, to use an Australian expression, is it just about ‘looking after your mates’? In some contexts, helping the people nearby could even be corrupt behaviour. Fortunately, it is possible to test the relationship between identifying with helping the people nearby and attitudes toward corruption using data from the World Values Survey. This survey asks respondents to rate their view on whether it is ‘justifiable for a person to accept a bribe’ on a scale from 1 to 10, where a rating of 1 means that it is never justifiable and a rating of 10 means that it is always justifiable. (As before, I am basing my analysis on cross-tabulations for about 80,000 respondents in 57 countries from the 2005 Survey.) 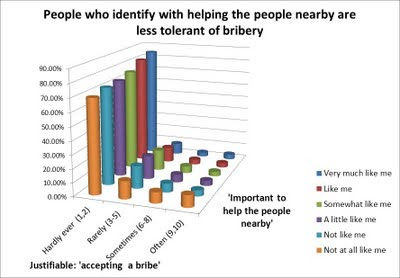 It is clear from the chart that people who identify with helping the people nearby have less tolerant attitudes toward corruption. Similar analyses show that these people are also less tolerant of social security and tax fraud, and fare evasion on public transport. It seems clear that the social fabic is stronger when a high proportion of the population identify with the importance of helping the people nearby.
Posted by Winton Bates at 8:47 PM

Great post, I admire the writing style :) A little off topic here but what theme are you using? Looks pretty cool.

Thanks. The theme is based on 'simple'.

I appreciate the concern which is been rose. The things need to be sorted out because it is about the individual but it can be with everyone.