Is the incidence of depression higher where a high proportion of the population are 'suffering'?

Before being willing to guess the answer to that question I expect most readers would want to know how I define suffering. For the purposes of this exercise, I am using the definition of suffering adopted by the Gallup World Poll. Gallup classifies respondents as "thriving," "struggling," or "suffering," according to how they rate their current and future lives on a ladder scale, based on the Cantril Self-Anchoring Striving Scale, where the bottom rating is ‘the worst possible life’ and the top rating is ‘the best possible life’. Respondents are classified as suffering if they have poor ratings of their current life situation (4/10 and below) and negative views of the next five years (4/10 and below). They are more likely to report lacking the basics of food and shelter, more likely to have physical pain, a lot of stress, worry, sadness, and anger. They have less access to health insurance and care, and more than double the disease burden, in comparison to "thriving" respondents.


So, do you think the incidence of depression is likely to be higher in countries where a high proportion of people are suffering? By now, you are probably thinking that must be a trick question. Given the way Gallup defines suffering, surely it must be reasonable to expect the incidence of depression to be higher in countries with relatively high levels of suffering.

However, that doesn’t seem to be so when the Gallup data are compared with the results of a recent study of the incidence of depression in 18 countries. The study, by Evelyn Bromet (and 21 co-authors) recently published in BMC Medicine involved face to face interviews of over 89,000 adults using the WHO’s Composite International Diagnostic Interview. I don’t know what that means exactly, but it sounds impressive. This looks like a reliable study.

The authors report that the incidence of major depressive episodes (MDE) was greater on average in the higher income countries than in the low-to- middle income countries included in their study. That is what attracted my attention initially and the reason why I thought it might be interesting to plot the incidence of MDE against Gallup estimates of the percentage of populations who are suffering, as shown below. 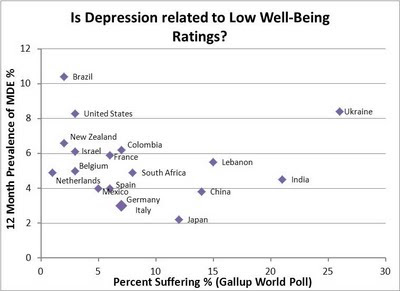 The findings of the study reveal several things about depression that I was not previously aware of. The incidence of MDE among women is, on average, about twice that for men. The average age of onset is the mid-20’s. The strongest demographic correlate in high-income countries was being separated from a partner, whereas in low-to-middle income countries it was being divorced or widowed.

Depression is obviously related to emotional well-being, but the links seem to be complex. For example, I don’t know how to relate data suggesting that only 2 percent of the population in Brazil are suffering with data suggesting that about 10 percent had a major depressive episode in the last 12 months. Over the last few years I have gained some understanding of correlates of well-being, but that doesn't seem to help much in understanding the incidence of depression.

Postscript 1
Cameron Lau of International Business Times talks about the depression study here. However, seems to have his facts twisted when he claims that depression rates in rich countries far outpace those in poor countries.

Postscript 2
I have just remembered a recent study by John Helliwell and Shun Wang that sheds considerable light on the incidence of depression in different countries. These authors have been able to explain 58% of the variance of 117 average suicide rates drawn from different years in 50 countries around the world using only four key variables: social trust, membership in community organizations, strength of religious belief, and the divorce rate. They comment: ‘The first three variables act to reduce suicide, while higher divorce rates are associated with higher suicide rates. The effects of social trust are large and statistically significant. Moving 10% of the population from generally untrusting to generally trusting, a shift of … less than one standard deviation for the sample data, would be predicted to lead to a … drop in the suicide rate, more than 10% of its average value’ (‘Trust and Wellbeing’, IJW, 2011, p. 50).

Data from World Values Surveys for 2005-6 indicate that the percentage of the population who think that most people try to take advantage of them (ratings of 1 to 4 on a ten point scale) is much higher in Brazil and the Ukraine (shown to have a high incidence of depression in the above chart) than in Japan, Germany and Italy (which have a relatively low incidence of depression).

However, lack of trust does not seem to explain the relatively high incidence of depression in the United States, where the percentage of the population who think that most people try to take advantage of them is about the same as in Japan, Italy and Germany.
Posted by Winton Bates at 3:42 PM

Email ThisBlogThis!Share to TwitterShare to FacebookShare to Pinterest
Labels: unhappiness and depression, Well-being measurement issues, What is happiness?

When there is a high proportion of population in big cities, there is ultimately depression among the people. This is not a phenomena of activities, this is actually a disease and a psychologist has its solution.

Unfortunately, I doubt whether the incidence of depression is that easy to explain.
As discussed above, it has links to berevement and breakup of relationships. There are issues of resilience involved. Some people/ societies are more resilient than others. It is possible that resilience can be learned. Martin Seligman is conducting an experimental program to teach resilience in schools.