How could the OECD's well-being indicators be improved?

This is the third post in a series on the OECD’s better life index. In the first post I played with the index to see how different weighting systems might affect the ranking of OECD countries. My conclusion was that different weights have some effect, but Australia comes out fairly well whatever weights you use. In my second post I derived a weighting system which gives higher weight to indicators that are highly correlated with each other. The countries ranked most highly on this basis tended to have a higher probability of exceptionally good performance on most of the indicators and lowly ranked countries tended to have a higher probability of exceptionally poor performance. My conclusion was that well-being indicators tend to tell similar stories.


In this post I consider how the OECD’s well-being indicators could be improved and how much difference the improvements I suggest make to the outcomes derived using the same methodology as in my second post.

In considering how the OECD’s well-being indicators could be improved I think it is important to try to specify what the indicators should be trying to measure. I think the main reason why such indicators are of interest is to provide information about the probability that the ‘average person’ (some person chosen at random) in different countries might have relatively high or relatively low levels of well-being. All the factors that affect individual human well-being – economic and psychological, basic needs and higher needs, individual goods and collective goods, objective factors and subjective factors – are potentially relevant.

People are interested in international comparisons of well-being for a variety of reasons, not just to monitor the effectiveness of government policies. In fact, well-being indicators are not necessarily closely related to government policies. For example, health indicators may be more closely related to cultural influences affecting smoking, alcohol consumption, obesity, exercise etc. than to public health policies. The impact of well-being comparisons on decisions of individuals and community groups might actually be more important than their impact on decisions made by governments.

However, that is no excuse for the OECD to exclude from its well-being indicators one of the most important factors affecting individual well-being that is subject to the influence of government – namely, individual freedom. The importance of perceptions of freedom to well-being has been established in several studies, including those by Paolo Verme (using a large data set drawn from the World and European Values Surveys, ‘Happiness, Freedom and Control’, 2007) and John Helliwell, Christopher Barrington-Leigh, Anthony Harris and Haifang Huang ‘International Evidence on the Social Context of Well-being’, Working paper 14720, NBER, 2009). There is data available from the Gallup World Poll on the variable used by Helliwell et al, the proportion of the population who are satisfied with their freedom to choose what they do with their lives.

The OECD includes a measure of governance, another factor that is strongly subject to the influence of government. However, the OECD’s indicator reflects only two factors: voter turnout at elections and consultation on rule making. Important factors omitted include corruption and the quality of public administration. I have modified the OECD’s governance indicator by incorporating the World Bank’s governance indicators (with relative weights determined by average correlation with other OECD indicators).

The OECD’s measure of the effect of the environment on well-being includes only one indicator – a measure of air pollution by tiny particulate matter small enough to be inhaled into the deepest part of the lung (PM10). I have modified the OECD’s indicator by incorporating subjective data on ‘satisfaction with efforts to preserve the environment’ from the Gallup World Poll (again with relative weights determined by average correlation with other OECD indicators).

So, how much do these modifications change the overall well-being index? Not much. If you focus on rankings you might get the impression that the change is substantial. For the most part, however, as shown in the chart below, there is little change in well-being levels. 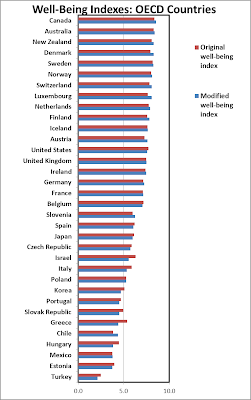 Was the exercise of modifying the indicators worth doing? I think so. I got some satisfaction from confirmation that the freedom indicator is highly correlated with housing, community, life satisfaction and income. It was also pleasing that the modifications to the governance and environment indicators made them more highly correlated with the other indicators. The exercise makes me a little more confident that it is appropriate to view well-being as analogous to a syndrome, with various indicators corresponding to symptoms.

The table with information for each of the modified indexes is shown below. As in the table in my second post, the various indicators are ranked from left to right in terms of the extent that each is correlated with the other well-being indicators. Exceptionally good performance (highlighted in green) is more than one standard deviation above the mean and exceptionally poor performance (highlighted in pink) is more than one standard deviation below the mean.

Hint: Click on the table for a clearer image. 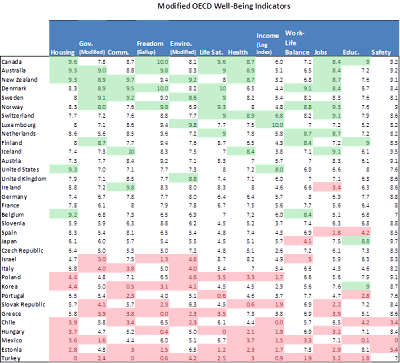