How did the gold fever of the 1850s affect Australian Aborigines? 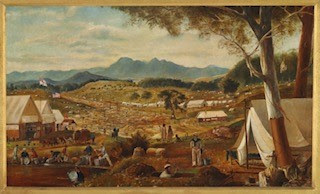 I began thinking about this question while reading Michael O’Rourke’s recently published book, Passages to the Northwest, The Europe they left and the Australia they discovered 1788-1858, A miscellany and scrapbook of national, regional and family history, From Ireland, Scotland, England and Germany to Liverpool Plains in colonial New South Wales, Volume II.

The full title provides an accurate picture of the nature of the book and what it is about. The history of how Michael’s family came to live on the Liverpool Plains, in the north-west of NSW, is central to the book but its focus is mainly on the context in which family members lived. I suppose Michael tells readers as much as he has been able to glean about the lives of individual family members. However, as anyone who has dabbled in family history would know, it is difficult to find much more than names and dates pertaining to ancestors unless they happen to have been rich, famous, or infamous.

“I was able to pour the genealogy, almost like cream, into the dry chronicles of local history while also keeping an eye on social changes and the national political and cultural scene, especially in Australia and Ireland”.

I agree with the author’s suggestions about who might benefit from reading the book. He suggests that apart from his family and relatives, those who might benefit include people who are interested in detail about the impact of European occupation on Aboriginal people, and people who live in the north-west of NSW. Some people who are heavily involved in family history research might also find the book useful to provide context for names and dates.

Michael has provided an index of topics at the front, and a detailed index at the back, which I found helpful. I have only read those parts of the book that particularly interest me at present. I expect that is probably how the author would expect most readers to approach it. At some later stage (perhaps when I am pondering the injustices that my ancestors may have suffered) I will probably go back to read more of what Michael has written about Ireland and Scotland.

I was particularly interested in Michael’s discussion of the relationships between Aboriginal people and European pastoralists (sometimes referred to as squatters, settlers, or invaders) in the Liverpool plains area. By 1835, the European occupation of Aboriginal land had extended beyond Narrabri, up to 550 km from Sydney. There was violence, but as Michael describes it, the incoming settlers “so effectively swamped the locals that there were only rare clashes, peaking in 1836-38”.

Introduced disease had a devastating impact on the Aboriginal population. An epidemic (probably smallpox) killed many during 1830-31. Venereal disease became rife, as convicts - who became shepherds living in remote outstations - infected Aboriginal women.

The pastoralists were known as squatters because they originally occupied the land without approval of the colonial government. By 1836, however, they were able to exercise sufficient political influence to have the government grant them short-term pastoral leases.

By 1850 the remaining Aboriginal population had apparently established their home bases near to the pastoral stations. Pastoralists employed Aborigines as shepherds during the 1840s but also employed Chinese in that role.

With the discovery of gold in 1851, many Chinese and European workers left the pastoral properties abruptly to go to the diggings, sometimes apparently leaving flocks they had been tending to the mercy of dingoes. The flocks became scattered before the owners were aware of the situation. Michael quotes from the published account of what followed according to Mary Jane Cain, a mixed-race matriarch:

“The squatters had to go practically cap in hand to the blacks they had dispensed with, and entreat them to again assume the role of shepherds. They got the flocks together, and generally made a good save. After that the squatters steered clear of Chinese labour for a long while”.

The discovery of gold apparently led indirectly to a substantial improvement in economic conditions for aboriginal people living on the Liverpool Plains.

Michael’s account of the indirect impact of gold fever led me to look further for other information on the impact of gold discoveries on the lives of Aborigines. Some accounts view it as “a second wave of dispossession”, but also note an increase in demand for the labour of Aboriginal people on pastoral properties at that time. Aborigines became employed as police on the goldfields. They sold food and clothing to the miners and were employed as guides. They also became expert gold seekers.

The illustration at the top of this article is a painting by Edward Roper, which depicts the gold rush at Ararat, south-west Victoria, at its peak in the late 1850s. At the centre of the scene, an Aboriginal family observes the activity around them.

Michael has included the illustration in his book. I thought it appropriate to have it accompany this article because some of my ancestors came to the Ararat diggings in the 1850s and later settled in that district.

The more I learn about the detail of the impact of European occupation of Australia on Aboriginal people, the more persuaded I become that “European settlement” is an inadequate description of what happened. Words like “conquest” and “invasion” are also inadequate because they conjure up images of warfare that have little resemblance to the sporadic resistance that some of the occupants of this country offered to the European squatters. The detail includes massacres, but disease seems to have been a much more important cause of depopulation. The best option for the indigenous people was co-existence with the new occupiers, but that required a radical change in their lifestyles.

Seen in that context, the advent of gold fever in the 1850s opened new opportunities for Aborigines to become more heavily involved in pastoral activities. I see this as an interesting example of the way disadvantaged people can respond to new opportunities. I hope there were lasting benefits for at least some of the families involved but I have no evidence of that.