What makes Meghalaya an interesting place to visit? 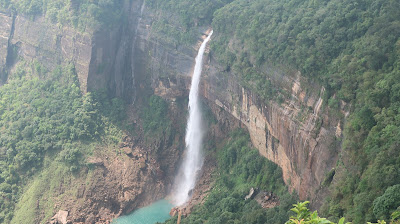 It is worth visiting Meghalaya just to see waterfalls, such as Nohkhalikai falls, shown above. Located near Cherrapunji, this is tallest waterfall in India. Visitors are likely to be told the sad story of Ka Likai, after whom the falls were named. However, I will not spoil the experience for you by attempting to summarize the story here.

There was a cultural element to much of my sight-seeing in Meghalaya. That was certainly true of my visit to double-decker living root bridge at Nongriat, which I described in the preceding article on this blog as one of the highlights of my trip to India.

In this article I will further discuss my experience of sightseeing in Meghalaya, endeavoring to highlight cultural aspects. My focus is the east of Meghalaya, the part of the state I visited. 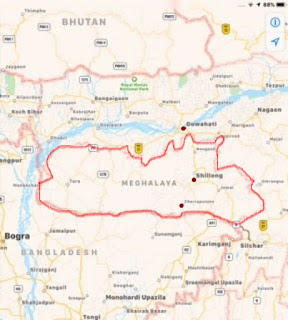 Upon arrival at the airport in Guwahati (Assam) I was driven to Shillong, where I stayed for 2 nights. After a day of sightseeing to the east of Shillong, I visited a sacred forest on the way to Cherrapunji. I stayed in Cherrapunji for 3 nights, and saw many different things in that general area.

In what follows I will present a few photos to give some broad impressions before making some observations about culture and history of the Khasi people.

Shillong is a busy place. This photo is of tourists and locals at the main shopping centre, called Police Bazar. 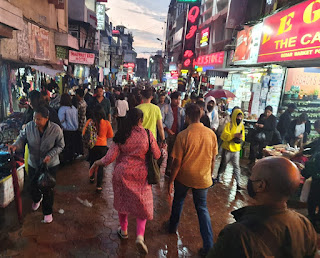 This photo shows a scene that is fairly typical of the people and countryside as seen from roads east of Shillong. 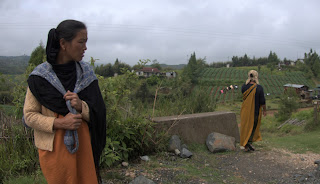 Hilltop cultivation seems fairly common in the east of Meghalaya. 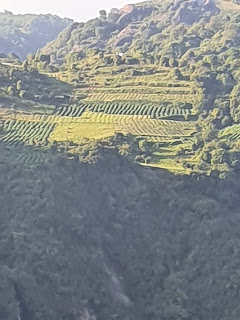 Krang Suri Falls are located in the Jaintia Hills east of Shillong. This waterfall may not yet be on the main tourist circuit, but there were quite a few Indian tourists there when I visited. 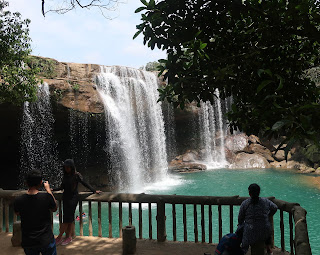 We stopped off at the Mawphlang Sacred Forest on the way from Shillong to Cherrapunjee. The photo is of an old Australian being shown around the forest by a local guide. 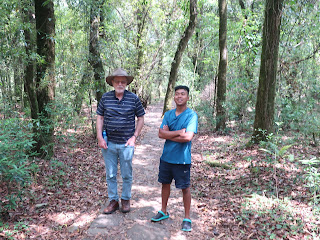 This is the place in the sacred forest where bulls were once sacrificed to appease the gods. Although bulls are no longer sacrificed, the forest is still treated with great reverence. Nothing is allowed to be removed from it. 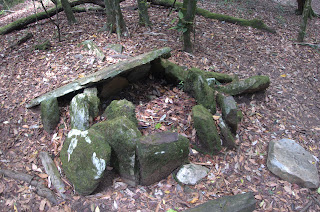 The Church of the Epiphany at Mawlynnong was founded in 1902. This village has had a strong tradition of Christianity since Welsh missionaries came here in the 19th century. Mawlynnong has been declared the cleanest village in Asia. Locals link their cleanliness to Christianity, apparently taking to heart the idea that cleanliness is next to godliness. 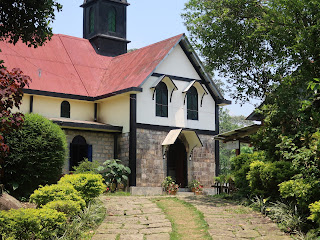 This photo of people engaged in a dart throwing competition was taken along the road to Dawki (on the Bangladesh border). It reminded me of something similar that I saw a decade ago when I visited Bhutan. 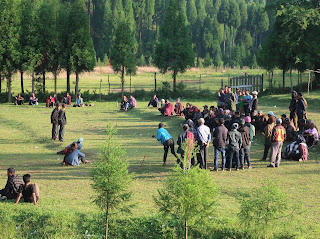 The majority of people in the east of Meghalaya are Khasi. They speak a Mon-Khmer language -the indigenous language family of mainland Southeast Asia - and their ancestors are thought to have migrated from that part of the world.

The inclusion of Meghalaya, and other states of the north-east as part of India, may have more to do with the legacy of British colonialism than with historical links to India. From a Khasi perspective, the central government of India replaced the colonial government of the British. Khasi enjoy a measure of local political autonomy via councils which they elect.

English is an official language of Meghalaya and is widely spoken there. Local guides and hotel staff were all proficient English speakers.

Mr Dipankar - the guide who accompanied me in Meghalaya, spoke excellent English. The only communication problem I became aware of arose when he was not present. I had been invited to have a meal with Hermina Lakiang - a historian associated with the North-Eastern Hill University in Shillong - and had arranged for my driver, Mr Simitar, to take me to her home. I knew that the driver had poor English, but I was slow to understand why he was having difficulty following the verbal directions that the professor was giving him about the location of her home. I later learned that they didn’t have a language in common. The driver was from Guwahati, and had no knowledge of Khasi, and the professor had not advanced her knowledge of Hindi beyond the rudimentary level she had attained at school. There was no reason for her to become a proficient Hindi speaker.

I am most grateful to have had the opportunity to have Hermina Lakiang explain some aspects of the culture and history of the Khasi to me. My understanding was greatly improved as a result of our discussion. However, the views presented below are my own – and the improvement of my understanding of Khasi culture and history was based on little knowledge to begin with.

The majority of Khasi are now Christians, but their ancestors believed in a Supreme Being as well as other deities of water, mountains, and other natural objects.

Christian missionaries were much less successful in other parts of India, where most people are adherents of Hinduism or Islam, or in neighboring countries where Buddhism prevails. So, how did the Khasi manage to avoid being conquered and converted to Hinduism, Islam, or Buddhism, before British colonial rule exposed them to Christianity?

The most obvious answer is that Khasi are located in hilly regions that were relatively easy to defend and not particularly attractive to potential invaders seeking land that was easy to cultivate.

However, as Sanjib Baruah points out in his book, In the Name of the Nation (2020, 29) the Khasi only became confined to the hills after confrontation with the British East India Company in 1789.

Edward Gait, a British colonial administrator, included a chapter on the “Jaintia Kings”, in his book entitled, A History of Assam, which was first published in 1906. (During the colonial era, the whole of the north-east region of India was referred to as Assam.)

Gait’s account suggests that the Jaintia kings ruled the Sylhet region (now in Bangladesh) from around 1500. These kings had Hindu names, but Gait suggests that the religion and culture of the people was never much influenced by Hinduism. He cites some evidence that matrilineal system of inheritance was still followed by the Jaintia royal family.

In the light of the observation made earlier to the effect that the inclusion of Meghalaya in India was a legacy of British colonialism, it is worth mentioning that some colonial administrators had expressed fears of what might happen to the culture of the Khasi following transfer of power to Indian hands. Sanjib Baruah cites Robert Reid, a former governor of Assam, among those who had argued in the 1940s for continued British control of the “Hill Areas” on paternalistic grounds (29-30).

The experience of the last 70 years has demonstrated that the fears of British colonists of what might happen under Indian control were unwarranted. As Baruah notes, the colonial safeguards to protect the people in those areas were largely retained and placed under the supervision of elected bodies following decolonization.

The impression I gained from my short visit is that Khasi people are proud of their cultural heritage, and that many are eager to defend it.