How should Lachlan Macquarie be remembered? 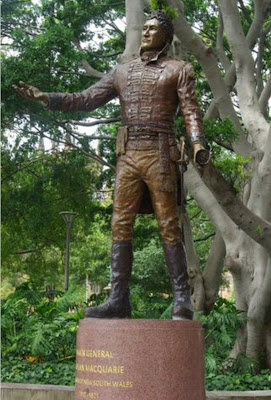 Lachlan Macquarie was governor of New South Wales from 1810 to 1821. At that time, the colony comprised much of the Australian mainland (known then as New Holland), Tasmania (Van Diemen’s Land) and other island territories.

Many years ago, when I studied Australian history at school, I came to the view that Macquarie, the fifth governor of New South Wales, was one of the best of the colonial governors. I still feel that Macquarie made a positive contribution to cultural values that are widely held in Australia today. It is unusual for despots to be good people, but I think Macquarie was one.

The above photo is of a sculpture of Lachlan Macquarie, located by Macquarie Street in Sydney. The inscription on the plaque describes Macquarie as “a perfect gentleman”, while that on his tomb in Scotland describes him as “The Father of Australia”.

Macquarie is also remembered in the many places named after him. Some that readily come to mind are the suburb of Canberra, where my family lived for several years; Port Macquarie, on the north coast of New South Wales, where we have enjoyed some holidays; and Lake Macquarie, where we now live. 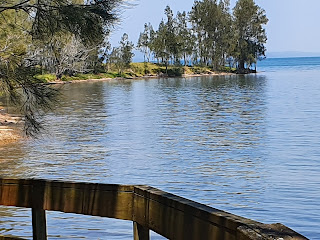 I have been prompted to write this article because there is currently a move for Lake Macquarie to revert to its original name, Awaba. The Indigenous inhabits of the region, Awabakal people, knew the lake by that name for many thousands of years prior to European settlement. I see no reason to oppose the name change if it can be accomplished without a great deal of cost and confusion, and in a spirit of reconciliation.

However, some of the proponents of the name change seem to me to be making it difficult for it to be accomplished in a spirit of reconciliation because they are arguing that Lachlan Macquarie does not deserve to be honoured. It looks to me as though they want him to be cancelled!

Those who seek to denigrate Macquarie refer to the fact that he ordered a military operation that led to a massacre of aboriginal people. They don’t have regard to the circumstances in which that order was given, or consider what alternative courses of action Macquarie could have taken.

What would you have done in his shoes?

I can understand why some readers might object to the idea of contemplating what it might be like to occupy the shoes of a colonial despot. Some might argue that those shoes did not have to be filled. The British could have chosen not to establish the colony in the first place. They could have found some other way to solve their problem of over-crowded prisons, and thus avoided encroaching upon the lands of Indigenous people.

However, as I see it, if similar choices to those confronting Macquarie were not faced by an alternative British despot, they would have been faced by a despot from France or some other European country. When Britain established the colony, other European powers were seeking to establish colonies throughout the world. So, if the British had not established the colony, it is highly unlikely that the Indigenous people would have been left alone to pursue their traditional lifestyles.

Lachlan Macquarie was a reluctant appointee to the position of governor.  The biographical history by M H Ellis indicates that after having served with the British army in India for 25 years, Macquarie considered it to be unfair that he was being posted to the colony. (Ellis, 166)

In contemplating what you would have done in Macquarie’s shoes, it might be helpful to consider his motives, the circumstances that led to the military operation, and whether alternative approaches might have led to more tranquil relations between Indigenous people and settlers.

On arrival in the colony, Macquarie expressed the wish that “the natives of the country, when they came in the way in a peaceable manner, might not be molested in their persons and property by anyone, but that they should always be treated with kindness and attention, so as to conciliate them as much as possible to the British Government and manners.”  (Ellis, 179)

How could Macquarie expect the Indigenous people to remain peaceable when their land was being taken away from them? I see some evidence that Macquarie saw potential for mutual benefit from more productive use of the land, and by helping Indigenous people to develop new skills and habits. From his paternalistic perspective, the Indigenous people were wasting their lives “in wandering thro’ their native woods … in quest of the immediate means of subsistence”. He saw them as having qualities that “if properly cultivated and encouraged might render them not only less wretched and destitute” but “progressively useful to the country according to their capabilities”. He expressed the view that they could “advance toward a state of comfort and security”. (Ellis, 352-3).

Macquarie allocated some land for use by Indigenous people on the grounds that they were “a harmless race, who have been without struggle driven by the progress of British industry from their ancient places of habitation”. (Ellis, 358)

Circumstances that led to the massacre

A deterioration in relations between Indigenous people and European settlers seems to have occurred in 1814 mainly because the settlers retaliated when Indigenous people helped themselves to unfenced fields of corn planted by the settlers. Macquarie saw fault on both sides. As he saw it, there had been a violation of property rights by the Indigenous people, but it was not a serious violation. He admonished the settlers to behave with patience and forbearance and not to take the law into their own hands. He warned that future aggressiveness by either whites or blacks would be punished in an exemplary manner. (Ellis, 353-4)

Nevertheless, attacks on settlers continued and some abandoned their farms. The governor felt that a severe response was required to prevent the frequent occurrence of trouble. In April 1816 he ordered a military action to drive the mountain tribes a safe distance from the settlement.  (Ellis, 355-6) Those seeking an account of the massacre can find relevant documents on the Australian Museum website. In a subsequent proclamation, Macquarie gave settlers the right to drive away Indigenous people who appeared armed with weapons within a mile of any town, village, or farm.

The military action had the desired effect of restoring order. Members of local tribes attended a friendly meeting which the governor held in December 1816 to, among other things, consult with them “on the best means of improving their present condition”.

The limits of my knowledge of the relevant history make it difficult for me to assess the options that faced Macquarie. Perhaps there was potential for him to restore order by adopting a response that was targeted to a greater extent at individual perpetrators of violence rather than on tribes of people, but I have not seen any authoritative discussion of that possibility.

It seems unlikely that Macquarie would have considered the option of attempting to achieve peace by limiting the area of European settlement. That approach would have been likely to lead to rebellion by the settlers and Macquarie’s replacement as governor.

The governor could have continued to pursue a conciliatory approach but there is no reason to believe that would have been successful in discouraging attacks on settlers, or setter retaliation. The most likely outcome, it seems to me, would have been an increase in violence on both sides, with a more extensive military intervention required eventually to end the conflict.

My view that Lachlan Macquarie made a positive contribution to cultural values that are widely held in Australia today is based mainly on the humane approach he adopted toward the people of the colony. He has been remembered particularly for his humane treatment of convicts and ex-convicts, who made up about 90 percent of the European population of the colony at the time of his appointment. Macquarie saw that some of the most meritorious people in the colony had come there as convicts and sought to treat them justly by giving them the opportunities to hold responsible positions.

Macquarie sought to extend this humane approach to the indigenous people, but was faced with difficult choices. Those who criticize the choices he made should consider what they would have done in his shoes.