How can we compare climate change and public debt risks? 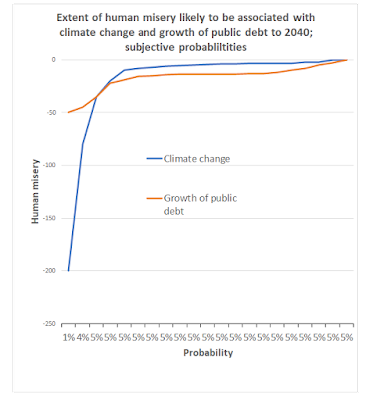 It seems to me that, over the next 20 years or so, people in Western democracies are likely to suffer to a greater extent from the consequences of an explosion in public debt than from climate change. At the same time, I acknowledge that climate change could possibly pose a serious threat to civilization and perhaps human survival. The chart shown above is my attempt to illustrate how those risks might be compared.

I make no claim to expertise in assessment of climate change risks. My reading on the topic suggests that the theory that increasing concentrations of greenhouse gases in the atmosphere are contributing to climate change is widely accepted by scientists. However, people with relevant expertise obviously have different views about the rate at which climate change is likely to occur, the contribution of human activity, the political feasibility of various forms of remedial action, and the adaptability of humans and other living creatures.

In my view, too little attention has been given to “tail risk” associated with climate change – the low probability that climate change will result in a great deal of human misery, as shown in the chart above. As I have written here previously, if you are concerned about climate change, you (like me) are likely to be more concerned about the remote possibility that your great grandchildren might suffer from having to live with potentially catastrophic climate change outcomes than about the more probable outcome that climate change might cause their incomes to be somewhat lower than economic modelling suggests they would be otherwise. I have also previously expressed agreement with Nassim Taleb that there are some risks we should avoid if possible, even though there is a low probability that they will occur at any point in time. In order to flourish, future generations need to be able to survive.

The reasoning behind the rest of the chart requires more explanation. Why do I think there is a 95% probability that the citizens of western democracies will suffer as much or more over the next 20 years from an explosion in public debt than from climate change? Since I don’t have either the inclination or expertise to weigh up the technical evidence on climate change for myself, I tend to rely on the IPCC’s assessments. I suspect the authors of IPCC reports are still somewhat biased toward attempting to present a view favouring urgent international action to reduce greenhouse gas emissions. Nevertheless, after they have been modified in the light of expert public scrutiny, the IPCC reports are probably the most authoritative source of independent assessments of the relevant evidence.

The IPCC’s assessment of likely climate change outcomes in Chapter 3 of its recent special report, Global Warming of 1.5 ºC, implies that we can expect some fairly serious adverse consequences over the next few decades:
“The impacts of climate change are being felt in every inhabited continent and in the oceans. However, they are not spread uniformly across the globe, and different parts of the world experience impacts differently. An average warming of 1.5°C across the whole globe raises the risk of heatwaves and heavy rainfall events, amongst many other potential impacts. Limiting warming to 1.5°C rather than 2°C can help reduce these risks, but the impacts the world experiences will depend on the specific greenhouse gas emissions ‘pathway’ taken. The consequences of temporarily overshooting 1.5°C of warming and returning to this level later in the century, for example, could be larger than if temperature stabilizes below 1.5°C. The size and duration of an overshoot will also affect future impacts.”

However, a recent OECD report on Greece, which is fairly optimistic about the future of that economy, seems to me to illustrate that public debt crises are likely to result in much more human misery than climate change over the next few decades:
“Despite these positive developments, challenges abound. GDP per capita is still 25% below its pre-crisis level. The public debt is still high and a source of significant vulnerability. Poverty rose sharply during the crisis, especially among the young and families with children. Though poverty has stabilised, it remains near a record high. Skill mismatch is also high and investment remains depressed. This contributes to low productivity – which has fallen further behind other OECD countries – and low wages – resulting in high in-work poverty. Though improving, female labour participation is among the lowest across OECD countries. The recovery in investment is held back by a dearth of finance – due in part to high levels of non-performing loans and to capital controls – high cost of capital relative to wages, cumbersome regulations and low demand. These problems weigh on people’s well-being”.

As I explained in a recent post, there are strong reasons to expect that the failure of governments in most OECD countries to restrain the growth of government spending is likely to cause debt servicing to become a more widespread problem in the decades ahead.  I think the most likely outcomes in most western democracies will probably be much worse that the outcomes of climate change, although not be as bad as the experience of Greece over the last decade. The chart above is drawn to acknowledge that there is some possibility that democratic governments will lift their performance, or world interest rates will remain low, so debt servicing may not be a problem.

The modest adverse outcomes depicted on the right side of the chart might well be offset by positive factors. There is a good chance that over the longer term the positive impacts of technological advances will be sufficient to offset the negative impacts of both public debt accumulation and climate change, but it would be excessively optimistic to expect rapid technological progress and productivity growth in western democracies over the next 20 years.

Some readers may object to my attempt to compare the risks associated with climate change and public debt explosion on the ground that these are very different risks when viewed at a national public policy perspective. There obviously isn’t much the government of any country can do to reduce climate change risk by acting alone.

However, I have drawn the chart with individual well-being in mind. From an individual’s perspective, the risks surrounding climate change and public debt are quite similar. Nothing that individuals do by themselves will make much difference to national or global outcomes. Voting might appear to provide an avenue for individuals to influence national outcomes but, as others have observed, voting in a national election is like ordering a meal from the menu in a restaurant and being served the same meal irrespective of what you order.

There are options that individuals can consider to reduce their exposure to both climate change and public debt risks. For example, consideration of climate change risk might influence decisions about housing location and construction, and consideration of public debt risks might cause individuals to reduce the extent that their families rely on government for health services, education and retirement incomes.

It strikes me that climate change and the risks of public debt explosion also pose similar ethical issues for individuals. Does the fact that an individual’s actions, considered in isolation, has a negligible impact on global and national problems absolve him or her of an obligation to moderate his or her contributions to those problems? I think not, but I will leave consideration of the issue for another time.