Why are the French so unhappy?

It is well known that people in France tend to rate their happiness and life satisfaction lower than other people with comparable living standards. Until recently I thought that might just reflect a tendency to get pleasure out of pretending to be grumpy. After all, the French know all about joie de vivre, don’t they?

However, after reading an article on the topic by Claudia Senik I think there might be some deeper cultural factors at work.

The tendency for the French to be unhappy is not just superficial. It is associated with relatively high scores in negative dimensions of mental health and exceptionally high consumption of psychotropic drugs. And it has been observed at least since the early 1970s.

The author attempted to disentangle the influence of circumstances (such as institutions, regulations and general living conditions) and the influence of mentality (attitudes, beliefs, ideals and ways of apprehending reality that individuals acquire during infancy and schooling). She did this by using survey data to examine differences between the happiness of different categories of migrants. Her main finding was that immigrants of the first generation who had attended school in France before the age of 10 were less happy, other things equal, than those who had not.

The results of the study seem to suggest that there is something associated with attending school in France that tends to make people less happy than they would otherwise be. The author has speculated that one factor that might be involved is the competitive nature of the education system in France.

I thought it might be interesting to take a look at World Values Survey data on desired child qualities on the grounds that the values inculcated via education systems might reflect the values of the broader population. The latest data available for France is from the 2005-09 round of surveys. The specific question is:
“Here is a list of qualities that children can be encouraged to learn at home. Which, if any, do you consider to be especially important? Please choose up to five”. Unfortunately, none of the qualities listed relate specifically to ambition or scholastic attainment.

Some of the qualities for which responses of French people seem differ substantially from those of people in other countries are shown in the following Figures. 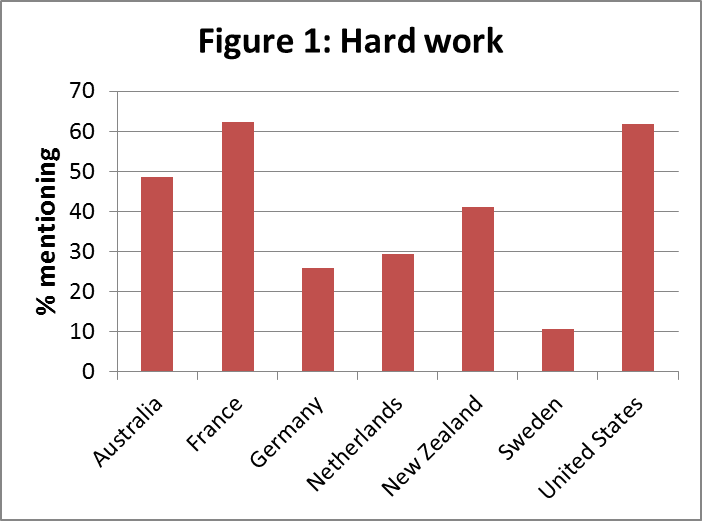 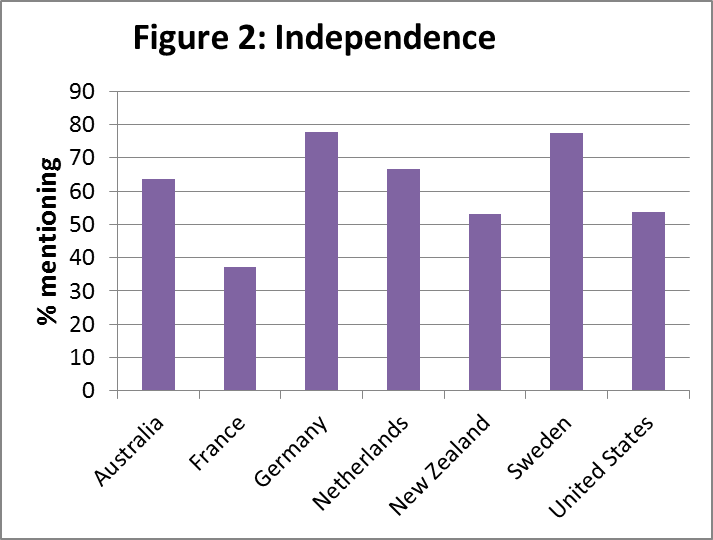 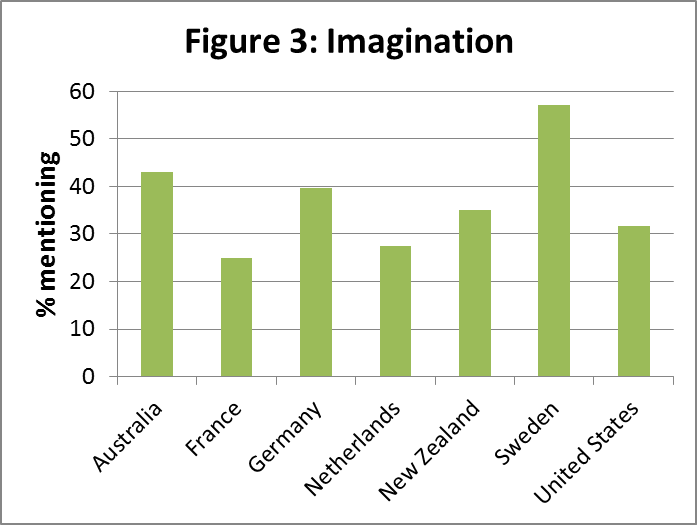 The Figures do not shed a great deal of light on the issue. It is interesting, nevertheless, that the French tend to attach great importance to children learning the virtue of hard work and tend to give relatively low priority to independence and imagination. Perhaps there is something wrong with my perception that life in France is characterized by enjoyment of leisure, and free expression of individuality and creativity.
Posted by Winton Bates at 7:30 AM

"life in France is characterized by [...] free expression of individuality and creativity."

Indeed, and unfortunately, you are incorrect in this assumption. France has been going away from promoting the expression of individuality, and instead promotes a strong attachment to a collective project. Very sad.

This being said, the graphs you show probably don't possess the metrics needed to understand the reasons behind Gallic morosity: from the graphs, the US share the same appreciation for hard work for instance.

If I were to make a guess, and probably a heavily biased one, I would say that the French are probably witnessing their own decline from being a once active, proud, forward-moving nation to becoming the museum and Disneyland of the world, and they are quite depressed about their own inability to do anything about it. Big government & welfare state is a drug: drug-addicts can go for increased doses and at the same time be realistic and sad about their own condition.

Sources: Je suis francais, and I have left France for the US greener pastures 17 years ago.

Hello Anon
I agree with the point you make about my graphs.

The evidence does seem to point quite strongly to some problem in the education system in France.

Perhaps children grow up morose after learning about France's glorious past. But migrant children would presumably not be affected by that.

My guess is that French schools encourage children to adopt ideals of equality which are not attainable in real life. However, that is nothing more than speculation.