Is there more economic freedom in Australia than in 'the land of the free'?

Both the Heritage Foundation and the Fraser Institute have economic freedom in the US declining below that of Australia around 2008.  See Figures 1 and 2 below. 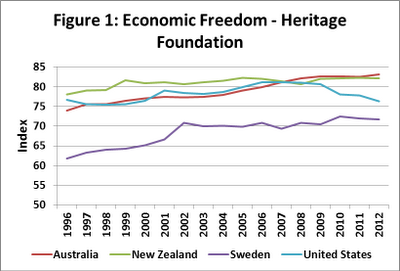 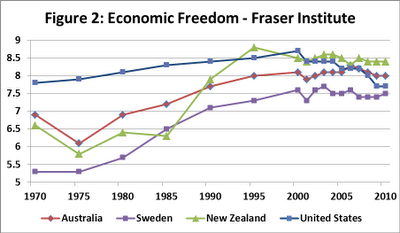 The timing of the decline in US economic freedom as indicated by the Heritage Foundation’s index suggests that it may be largely associated with the aftermath of the Global Financial Crisis, but the Fraser Institute’s index has the decline beginning around the turn of the century. According to the Heritage index the main decline in recent years has been with respect to financial and investment regulation, but the Fraser index also shows a decline in other areas, including freedom to trade internationally.

If the decline in US economic freedom was related solely to re-regulation of financial markets, it might be tempting to dismiss it as some kind of necessary evil. Well, it isn’t, but that will not stop me from suggesting that financial re-regulation has been far from benign in any case. Rather than side-track myself on that issue, however, I will just link to a highly relevant recent article by Ken Rogoff.

There are several reasons why Australians should not take comfort from indexes suggesting that we now have greater economic freedom that the US. The most obvious is that it has occurred as a result of a decline in economic freedom in the US, rather than any recent reform efforts in Australia.

The second reason is because the measurement of economic freedom is difficult. I think the Fraser Institute and Heritage Foundation should be applauded for their efforts to define economic freedom precisely enough to enable it to be measured, but I don’t think their indicators adequately capture all relevant aspects of the regulatory environment. For example, in 2008, just before he left Australia, Phil Burgess made some important points about the regulatory environment in this country that would be difficult to capture adequately in economic freedom indexes.

Before I proceed further, I should remind you that Phil Burgess was one of the ‘three amigos’ who came here to help Telstra through a difficult period. If that doesn’t ring any bells, you might remember the very wise - and very public – investment advice he gave to his mother about not buying Telstra shares because of what the government was then doing to squeeze profit out of that company, not long after selling it to gullible investors.
The comment that Burgess made concerns the degree to which the ‘public order’ tends to dominate the ‘civic order’ in Australia. What he was talking about was that, compared with other liberal democracies, government leaders in Australia have a very high capacity to frame and control the public dialogue by virtue of agenda setting, money and expectations management. Counterbalancing voices of legitimacy and authority in the civic order – including business - are, by contrast, often muted and ineffectual. He suggests that is associated with a greater tendency for the civic leadership groups to play an insider’s game and focus on influencing politicians.

I think Phil Burgess is probably correct in his judgement, but I don’t have sufficient knowledge of the US to be sure. If he is correct, it would be fair to say that economic freedom indexes tend to over-state the extent of economic freedom in Australia relative to the US.

My third reason for not taking comfort from indexes showing economic freedom higher in Australia than in the US is that public attitudes are still more supportive of economic freedom in the US than in Australia. Data from the World Values Survey suggests that Americans are more strongly in favour of the existence of large income disparities as incentives (i.e. less in favour of redistribution to make incomes more equal), less in favour of public ownership of business, somewhat more inclined to say that competition is good and less cynical on the question of whether success comes from luck and connections rather than hard work.
All that suggests to me that it would not make sense to bet my life savings that the economic freedom will be greater in Australia than in the US over the next few decades. The only problem is that my modest life savings are actually almost exclusively allocated towards investment in Australia. It might be time for a re-think!
Posted by Winton Bates at 9:53 PM

Interesting post, Winton. May respond after I have had time to absorb it properly.

Thanks Jim. I hope you do respond.