Does evolutionary psychology shed light on the source of human intuitions? 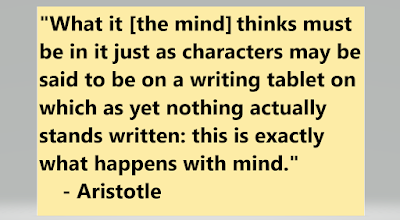 I have difficulty thinking of Aristotle as a blank slate theorist. The view that evolved psychological adaptations play no role in determining human behavior seems impossible to reconcile with Aristotle’s teleological view that living entities contain in themselves the principle of their own development. It is worth remembering, however, that Aristotle saw personal development as linked to formation of good habits – he saw roles for both nature and nurture in human flourishing. In order to make sense of the passage quoted above I need to allow myself to imagine a blank writing tablet that has functional specialization allowing information relevant to the flourishing of our pre-historic ancestors to be most readily written upon it. (Incidentally, the quote is from On the Soul, Book III, Part 4.)

Evolutionary psychology has promoted the view that evolved psychological adaptations play a role in determining human behavior. To consider the light it sheds on the source of human intuitions I will begin with Steven Pinker’s list of the cognitive intuitions (also referred to as modules, systems, stances, faculties, mental organs, multiple intelligences, and reasoning engines), and then move on to Jonathan Haidt’s list of ethical intuitions. I will then consider whether attacks on evolutionary psychology should cause us to be wary of the evolutionary reasoning associated with such lists.

Pinker suggests that we are equipped with a range of different cognitive intuitions that evolved through psychological adaptations to keep our ancestors in touch with reality. These intuitions emerge early in life, and are present in every normal person. His list includes a basic intuitive grasp of physics, biology, engineering, psychology, and economic exchange. It includes a spatial sense, and senses of number and probability. It also includes language, and a mental data base and logic that are used to represent ideas and infer new ideas from old ones. These intuitions are suitable for the lifestyles of small groups of illiterate people living several thousands of years ago. They do not give people a spontaneous intuitive understanding of modern science, technology, or economics. (Steven Pinker, The Blank Slate, 2002, 219-21)

The views of Pinker and Haidt seem to me to be plausible, but can this kind of reasoning withstand the criticism that evolutionary psychology consists of “just so” stories?

In his book, Rethinking Evolutionary Psychology, Andrew Goldfinch, a philosopher, tells readers that critics view evolutionary psychology explanations “as shockingly naked in historic and scientific detail”. Massive modularity has been a particular focus of criticism. The strongest form of massive modularity claims that there are no systems or mechanisms that are not dedicated to particular problems.

I came to Goldfinch’s book with the idea that the concept of brain plasticity was opposed to modularity. I had thought that evidence that brains “rewire” themselves in response to experience as people transition from infancy to adulthood would tend to count against modularity. However, many cognitive psychologists stress that when they talk about modules what they have in mind is functional specialization which is consistent with overlap between processing areas of the brain. Plasticity enables brains to develop so that individuals normally have intuitions that are common among adult humans.

However, Goldfinch also makes it clear that the existence of innate knowledge does not require massive modularity. It is possible for domain-specific knowledge to be generated by domain-general processing. Both domain-specific and domain-general mechanisms are compatible with evolutionary theory. I think it follows that the issue of whether the lists of intuitions compiled by Pinker and Haidt are evolutionary adaptations does not depend on the validity of the theory of massive modularity.

The main point that Goldfinch makes is that leading evolutionary psychologists have brought their research program into disrepute by packaging it as a paradigm shift. The research program became identified with claims of a strong form of massive modularity as leading proponents argued that evolutionary adaptation implies the existence of strong massive modularity. Leading proponents used the concept of strong massive modularity to challenge conventional social science based on the foundation of domain-general knowledge and processes that are exclusively social. This prompted excessively critical responses that sought to discredit the entire research program as “just so” stories.

Goldfinch summarizes his view as follows:

“Initial evolutionary psychology hypotheses aim, or should aim, not for the last evolutionary word on a given phenomenon, but the first. They are in constant adjustment—both with the research programme’s own findings and findings from adjacent research programmes and disciplines. If this is done, this should generate sophisticated hypotheses, as well as generate progressive increments to our understanding of psychological and social phenomena.” (200)

I can see the wisdom in Goldfinch’s suggestion that evolutionary psychologists should not be aiming to have the last word. Should any scientist ever be aiming to have the last word? However, I think it is inevitable that a good number of the hypotheses advanced by evolutionary psychologists will challenge beliefs that human behavior is wholly attributable to simple mechanisms of learning and can be modified readily by changing social arrangements.

Even if the views about human intuitions put forward by evolutionary psychologists only have the status of plausible speculations, they can still help us to comprehend aspects of the world we live in. For example, Pinker’s views provide a provisional understanding of why people tend to perceive the world they live in much the same way as their ancestors who knew nothing about the processes that modern physics describes. Haidt’s views provide a provisional understanding of why people hold ethical intuitions that cannot be readily explained in terms of current social circumstances. The paucity of historic detail supporting such speculations should not cause them to be dismissed unless more plausible explanations are offered. Those seeking truth should find plausible speculations more satisfying than implausible speculations and mysteries.