Is the Maga Carta a worthy symbol of the ongoing struggle for freedom? 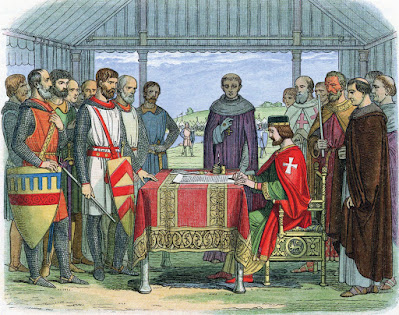 I was prompted to ask myself this question when reading Zachary Gorman’s recently published book, Summoning Magna Carta, Freedom’s symbol over a millennium.

Gorman does not attempt to argue that the freedoms enjoyed in liberal democracies flowed inevitably from the Magna Carta. He notes that the history following the Magna Carta “is one of difficulties, setbacks and moments that could have easily set us down a very different path”. He suggests that there is “semi-mystical power” in the history of the Magna Carta:

“The supposed laws of Edward the Confessor became a living Great Charter of liberties; the ancient constitution became the current working constitution.” (238)

My conclusion, after reading Gorman’s book, is that the Magna Carta is a worthy symbol of the ongoing struggle for freedom.

King John signed the Magna Carta in 1215 - at Runnymede which is on the Thames, west of London (not far from the location of Heathrow airport). He probably perceived that the alternatives to signing were unpalatable. He had been waging war in France in an attempt to recover lost territory. A large number of barons refused to provide troops as requested, claiming that their obligations extended only to the Anglo-Norman heartland of England, Normandy, and Brittany. Eventually, the rebel barons captured London, with the help of local townsfolk. King John did not have the funds required to hire mercenaries to reverse the situation, so he agreed to meet the rebels at Runnymede. Magna Carta was negotiated between King John and the barons with the help of the Archbishop of Canterbury, Stephen Langton (although Pope Innocent III sided with King John and opposed the Magna Carta).

With the benefit of hindsight, the most important provisions of the Magna Carta were those that required the barons to be consulted before taxes were raised (a step in the direction of “no taxation without representation”) and those establishing some fundamental legal rights. The document stipulated that freemen were not to be “taken or imprisoned or disseised or exiled … except by the lawful judgement of his peers or by the law of the land”. That provision had limited application at the time because serfdom was common, but was a step in the direction of rule of law.

I learned about the Magna Carta at school, but at that time it just seemed to be one of many boring incidents in English history. My more recent reading led me to think of it as evidence that England had retained some of the Classical Roman tradition which viewed law as evolving via judicial processes (in which precedents were seen to provide guidance) rather than as being created by the edicts of kings (or emperors). Gorman’s book provides the historical background to development of the narrative that the Magna Carta reaffirmed ancient rights, that were observed to some extent during the reign of Edward the Confessor – about 150 years earlier, prior to the Norman Conquest. The book documents how the Magna Carta was re-affirmed and extended, and became a symbol of the ongoing struggle for freedom.

Highlights of Gorman’s book include his account of the central role played by William Penn in bringing the Magna Carta to the American colonies and the role of the Magna Carta in the fight for self-government in Australia. Gorman notes that after Imperial legislation of 1850 failed to provide self-government to New South Wales (NSW), William Charles Wentworth got the NSW Legislative Council to cite the Magna Carta in declaring that the Imperial parliament does not have any right “to tax the people of this Colony”. The argument that taxation required consent, both in its raising and spending, was no doubt intended to remind the British government of the American Revolution, which had occurred because many American colonists perceived that the British Government was violating their ancient rights.

In Australia, the Magna Carta still shapes how the High Court interprets the constitution through the common law. In 1925, High Court Justice, Isaac Isaacs, declared that it is the Magna Carta, rather than the Australian Constitution, that ensures everyone “has an inherent right to his life, liberty, property and citizenship”. However, the ongoing influence of the Magna Carta seems likely to depend on citizens continuing the tradition of viewing it as a worthy symbol of the ongoing struggle for freedom.

On Anzac Day (April 25) when Australians commemorate those who served and lost their lives in past wars, speechmakers often tell us that they were fighting for freedom. It is worth remembering that the freedom they fought for has strong links to the Magna Carta.