Did the framers of the U.S. Constitution intend it to protect liberty?

A week ago my answer would have been along the lines that while I could not claim any expertise in American history I had the impression that the natural right to liberty had been recognised in both the US Declaration of Independence and the US Constitution. In support of that view I would have pointed to the division of powers between the executive, congress and judiciary; the specific guarantees of freedom including freedom of speech; and the allocation of specific powers to the central government with remaining powers residing with the states. I would have argued that limiting the powers to the central government was a particularly important guarantee of freedom because states which imposed burdensome taxation and regulation were likely to lose out in the competition for people and investment. However, I would also have indicated that I was aware that the federal government had ended up with more power than the founding fathers had intended as a consequence of imaginative judicial interpretations of the Constitution. 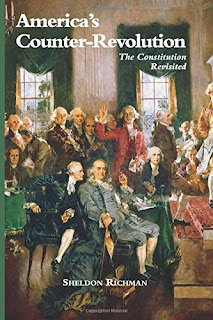 My view of the libertarian credentials of the framers of the US Constitution has been challenged over the past week by my reading of Sheldon Richman’s book, America’sCounter-Revolution: The Constitution Revisited. Richman suggests that the framers of the US Constitution staged a counter-revolution:
“the Constitution, far from limiting government, was actually designed to bring about a new one that betrayed the ideals of the Declaration of Independence itself. … There is a reason it has done a poor job in protecting freedom: it was never intended to do so”.

The Constitution was ratified in 1788, twelve years after the Declaration of Independence. It replaced the Articles of Confederation, which had been ratified in 1781. Under the Articles the government of the United States had been essentially confined to external affairs. It had no power to tax, regulate trade, or raise an army.

Greater central government powers were apparently not required to improve the lives of citizens. Under the Articles of Confederation, America was relatively peaceful and prosperous. In Richman’s words, life “wasn’t so bad after all – at least for white males with property  … ; obviously it wasn’t so good for African Americans, Indians, and white women, but their fate did not change in 1789”.

Richman cites evidence that a negative impression of the confederation period was fostered by those who favoured nationalist centralisation. Mercantile interests apparently tended to favour nationalist centralisation because they hoped it would help them to hold onto political power at the expense of radical democrats – including overtaxed small farmers - who were gaining greater representation in some state legislatures. Interstate protectionism was more legend than fact.

The author suggests that from the outset the US Constitution could reasonably be seen as a stool with three legs: taxation; mercantilist trade-promotion; and national security in a hostile world. The Constitution gave Congress taxation powers that would be sufficient (in my view) for any modern warfare/welfare state: “Power To lay and collect Taxes, Duties, Imposts and Excises, to pay the Debts and provide for the common Defence and general Welfare of the United States”. Promoting trade was seen in those days (and still today in many quarters) to be more about opening export markets than enabling mutually beneficial transactions between people in different countries; trade-promotion was about selective embargoes and building empires. The nationalists sought a permanent military establishment that would be powerful enough to protect the nation’s interests from the old colonial powers and the Indian nations, whose lands Americans coveted.

The bill of rights in the US Constitution was introduced as an afterthought to mollify anti-federalists who had made the absence of a bill of rights the top talking point against the draft constitution. The rights embodied were largely uncontroversial common law rights of Englishmen.

Richman seems to me to make a strong case that James Madison, sometimes referred to as the father of the US Constitution, was father of the “implied-powers doctrine”. Madison argued that it was impossible to confine the federal government to the exercise of powers “expressly delegated” unless the constitution “descended to recount every minutiae”. Richman comments:
“Madison was right, of course. … There must be implied powers. But that’s the danger of a constitution and a monopoly constitutional government. Implied powers must be inferred, and inference requires interpretation. Who is likely to have the inside track in that process: those who seek to restrict government power or those who seek to expand it? We know the answer to that question”.

This book does more than make the case that a counter-revolution set America on the wrong path over 200 years ago. The author asks an important question that could help put America back on the right path: “Where is the Constitution?” Richman is referring to “the real constitution – the set of dispositions that influence what most Americans will accept as legitimate actions by the politicians and bureaucrats who make up the government”.  The point he is making, with the aid of Roderick Long’s (easily found) contribution on “market anarchism as constitutionalism”, is that if government power is to be wound back the real constitution must be pro-liberty:
“That’s why there’s no substitute for education and an intellectual-moral revolution”.

Another piece of wisdom that Sheldon Richman provides to libertarians is to avoid letting the perfect be the enemy of the good:
“I see no reason for libertarians, in the name of purity, to withhold support for steps that make real progress toward liberty and pave the way for more”.

That is an approach that a I can readily support without having to be persuaded that market anarchy offers the best prospects for human flourishing.
Posted by Winton Bates at 3:53 PM