How can we measure human flourishing? 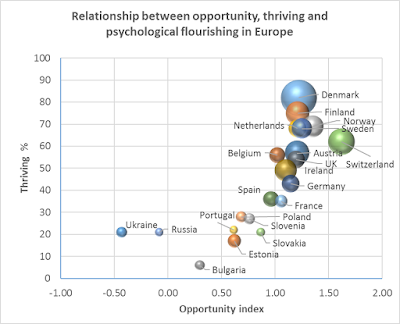 This graph suggests that, at a national level, three quite different indicators of human flourishing tell a similar story about human flourishing. The opportunity measure, shown on the horizontal axis, encompasses economic freedom, income, education, health and environmental performance. The thriving measure, shown on the vertical axis, shows the percentage of the populations who are positive about their present life situation and optimistic about the next five years. The measure of psychological flourishing, shown by the size of the bubbles, reflects the percentage of the populations whose responses to questionnaires indicate competence, emotional stability, engagement, meaning, optimism, positive emotion, positive relationships, resilience, self-esteem, and vitality.

The focus on European countries was dictated by the data source on psychological flourishing:  an article by Felicia Huppert and Timothy, ‘Flourishing Across Europe’ (published in Soc.Indic.Res. in 2013). The thriving data is from Gallup World Polls using the Cantril scale which asks people to evaluate their lives relative to the best possible and worst possible life. The opportunity measure was created using methodology described in Chapter 6 of my book, Free to Flourish.

The graph raises such questions as whether Scandinavian countries will be able to sustain high rates of thriving and psychological flourishing in future without further expanding individual opportunities.

However, I want to focus in this post on how we came to measure human flourishing in three different ways and what the different measures tell us.

First, consider measures of opportunity. GDP per head of population has been used by economists as a rough measure of well-being for many decades, even though its potential shortcomings for this purpose have been well known since the concept was developed in the 1930s. Recognition of such problems led to efforts to take account of longevity and education, in the UNDP’s Human Development Index, and of a wider range of indicators of the quality of life in the OECD’s Better Life Index and similar indexes - including the opportunity index used in the graph. All those indexes can be viewed as measures of opportunity; they are not direct measures of well-being or human flourishing. It is possible to be wealthy, highly educated and have good physical health and yet to be deeply unhappy.

Second, there are attempts to measure well-being directly using surveys asking individuals to give a simple numerical rating to their happiness or their satisfaction with their lives.  The data on thriving shown in the graph are based on subjective well-being assessments of that kind.

As I have discussed in a previous post, evaluations of life satisfaction can also be interpreted as frames of mind, which influence the extent to which people experience positive emotions. Monty Python (and many philosophers and psychologists) tell us that people who have a disposition to look on the bright side of life are better able to maintain relatively high life satisfaction. The evidence that life satisfaction is influenced by dispositions that are attributable to genetics also supports a frame of mind interpretation. People in Denmark are apparently particularly favoured by genes that promote high life satisfaction.

The main reservation I have about the tendency to use of life satisfaction as the gold standard in measuring human flourishing stems from evidence (for example, findings of research by Daniel Benjamin, OriHeffetz, Miles Kimball and Nichole Szembrot)  that when faced with relevant choices people rank life satisfaction less highly than other criteria such as the overall well-being of their family, being a moral person, having a meaningful life, and having many options and possibilities in life and freedom to choose among them. Some of the findings of this research are not easy to understand, but those noted above are, at least, consistent with the choices people could be expected to make when they exercise their practical wisdom.

As the philosopher Daniel Haybron has observed recently, there is no consensus among eudaimonic psychologists about what their measures of well-being should look like. Dan Haybron has provided what seems to me to be a good account of the “philosophical basis of eudaimonic psychology” in a chapter of that name in J Vitterso (ed.) Handbook of Eudaimonic Well-being.  I don’t agree with him on the question of whether it is possible for the wicked to flourish, but I don’t think that impinges greatly on the measurement issues. Haybron argues cogently that the main factors that should be targeted in eudaimonic measures of psychological well-being are:


He also acknowledges the importance of some other factors that researchers may wish to measure: authenticity, knowledge and virtue.

In my view Haybron’s contribution should provide a useful basis for further consideration of these matters by psychological researchers, but any consensus they reach will inevitably be somewhat arbitrary and tenuously related to the perceptions of individual survey respondents about the factors that are important to their own flourishing.

I end by raising a couple of questions:
First, how should researchers determine what weights should be given in combining ratings of factors targeted in their surveys? My answer, very briefly, is that this should be left to the practical wisdom of survey respondents. I considered the question here.

Second, would it be enlightening to attempt to combine measures of economic opportunity with measures of psychological flourishing? My initial thought is that before considering that question we should have a clear view of the purpose(s) for which such a combined measure might be more useful than separate indicators of economic opportunity and psychological flourishing. I can’t think of any right now.

Very nice post! It might be useful to see your opportunities index related to the capabilities framework, which in my view is really just a kind of opportunity approach--and possibly better framed as a matter of opportunities (though maybe the connotations of the latter aren't always helpful).

I suspect policy should consider well-being/outcome and opportunity metrics, and also don't see any clear rationale for combining them, except perhaps in some still broader index including lots of other stuff as well. In my work on capabilities, I suggest that the latter better captures something like parents' concern that their kids have good opportunities (so push them in school), which is distinct from a wish that they be happy/do well, which can sometimes be in tension with giving them the best opportunities. (If your kid goes to Harvard, great opportunities, probably not so happy.) Though in line with your graph, I assume they generally tend to be positively correlated.

On life satisfaction (LS)  measures: you point to one of the odd features of the Benjamin et al work, which generally seems to undervalue emotional goods as well. I suspect the setup skews answers misleadingly on things like that (though I think their work is really cool). But also, partisans of LS should not be bothered by that result: the smart position is to allow that LS itself isn't very important (hence the responses), but is very useful as an indicator of success in the things people do care about. So if LS is a valid measure, it should reflect all those other things, in proportion to how much people care about them. i suspect the Benjamin et al framework might be used to help test LS measures: are they sensitive enough to what people actually care about? Or do they lean too heavily on information that is chronically salient, like day-to-day material concerns?
Posted by Winton Bates at 3:14 PM