Who was Erasmus and why should we care? 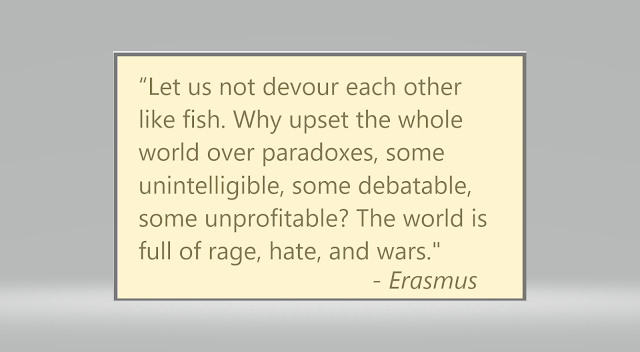 After I stumbled across that quote a few days ago, it struck me that Erasmus might have something relevant to say to people living today.

However, before I discuss the context in which Erasmus made that statement, it might be helpful to provide some relevant background information about him.

The man and his vocation

Erasmus was born around 1467 and died in 1536.  William Barker, the author of a recently published biography, Erasmus of Rotterdam: The Spirit of a Scholar, tells us that Erasmus had become famous by the time he reached his mid-fifties. Erasmus was a prolific author. The rise of the printing press helped him to establish an international reputation during his lifetime. At that time it was possible for a humanist scholar – one steeped in the literature and culture of ancient Greece and Rome – to have fame equivalent to that of an Einstein or Stephen Hawking in more recent times.

Although Erasmus was a priest, he remained independent of the church hierarchy. Patrons offered gifts and allowances, which he accepted, but he was not dominated by any person or institution. He had an aversion for scholastic theology, believing that the words of the Bible show the message of Jesus more clearly than could any scholastic commentator. He based his famous translation of the New Testament on ancient Greek manuscripts because he believed that some of the original reports written by followers of Jesus had become distorted in the official translation used at that time.

In addition to his Translation of the New Testament, Erasmus’ famous works include The Praise of Folly, and his compilation of Roman and Greek proverbs. The Praise of Folly takes the form of a speech by Folly, seeking to persuade us that she is basic to all our lives. Barker sums up the book as follows:

“The work begins with social criticism, a kind of genial mocking, but it ramps up to direct attacks on various interest groups in the political, intellectual and religious worlds, and, in the amazing final move, suddenly turns inwards, and pulls the reader towards the abyss found in the complete loss of self through a total religious faith.”

As I see it, theological disputes were a particular focus in this book. Erasmus wrote:

I [Folly] am often there, where when one was demanding what authority there was in Holy Writ that commands heretics to be convinced by fire rather than reclaimed by argument; a crabbed old fellow, and one whose supercilious gravity … answered in a great fume that Saint Paul had decreed … “Reject him that is a heretic, after once or twice admonition.” And when he had sundry times, one after another, thundered out the same thing, … at last he explained it thus … . “A heretic must be put to death.” Some laughed, and yet there wanted not others to whom this exposition seemed plainly theological … . “Pray conceive me,” said he, “it is written, ‘Thou shalt not suffer a witch to live.’ But every heretic bewitches the people; therefore …”.

Erasmus’ book of proverbs was also a vehicle for social criticism. For example, in his revised version of this book, his commentary on the proverb, “War is a treat for those who have not tried it”, is a passionate essay praising peace and condemning war. Barker notes, however, that Erasmus’ condemnation of war was not unbounded. He approved of war against the Turks during the 1520s when they had reached the outskirts of Vienna.

Context of the quote

The context of the passage quoted at the top of this article is explained by Paul Grendler in his article, ‘In Praise of Erasmus’ (The Wilson Quarterly 7(2) Spring 1983). The plea, “Let us not devour each other like fish” was in response to an attack by his former friend Ulrich von Hutten, who had become an associate of Martin Luther. Erasmus welcomed Luther as a fellow reformer in 1517 when he began to criticize greedy churchmen and the worship of relics. However, as Luther’s criticism of Catholicism became more abusive, Erasmus counselled moderation. Luther would have none of it:

“You with your peace-loving theology, you don’t care about the truth. The light is not to be put under a bushel, even if the whole world goes to smash”.

The papacy was not inclined to stand idly by while Luther “led souls to hell”. So, Europe went to smash!

Erasmus continued to try to mediate between Catholic and Protestant, asserting that he found much to admire in Luther while disagreeing with him about predestination. The Catholic response was that “Erasmus laid the egg that Luther hatched”.

Unfortunately, Erasmus was unable to persuade the contending parties to refrain from warfare. If political institutions had provide greater support to Erasmus’ message at that time, perhaps it would have been possible for Europeans to have avoided a few centuries of pointless religious warfare.

William Barker laments that the old discourse of humanism seems to have been eclipsed:

“Something has happened to the humanities and the old discourse of humanism in our time. The ideal of Erasmian humanism – a cosmopolitan, well-educated Republic of Letters – has moved to the margins of our cultural life. A shift in political, ethnic, gender and ecological values has led to a change in the cultural hierarchy.”

Nevertheless, he still sees Erasmus as relevant to the culture of our times:

“Despite our hesitations and the new trajectories in our literary culture, there are aspects of Erasmus that still survive for us, that take him outside his historical moment and the programmatic frame of humanist education. We can still turn to him for his irony, laughter, and the free exercise of social criticism.”

I agree with all that, but I also see Erasmus’ message about refraining from war over theology as being highly relevant today. When Erasmus was alive, contending parties engaging in theological disputes were obviously willing to use coercive means to impose their will on their opponents. Today, not much has changed. Extremists among contending parties engaged in ideological disputes are still willing to use coercive power to impose their will on their opponents.

Few people who live in the liberal democracies have any difficulty condemning the authoritarianism of dictatorships which seek to prevent individuals from exercising freedom of conscience in their religious observance. However, there are many people among us who unwittingly engage in similar authoritarianism themselves. I am thinking particularly of politicians who are so certain of the correctness of their ideological beliefs that they struggle with the idea that those with opposing views are entitled to exercise freedom of conscience.

The exercise of freedom of conscience over the status of human embryos is the example that comes most readily to mind. I wrote about his in the preceding post. At one extreme, we have politicians claiming that pharmacists who refuse on conscientious grounds to supply medications that could be used to induce abortion are guilty of some kind of civil rights violation. At the other extreme we have politicians arguing that under no circumstances should it be lawful for a woman to exercise freedom of conscience to terminate a pregnancy.

Will this conflict end in open warfare? The only reason I can see for ideological and theological authoritarianism to result in less violent outcomes today than occurred 500 years ago is the existence of democratic political processes. Unfortunately, in some liberal democracies those processes may no longer be sufficiently robust to provide contending parties with appropriate incentives to moderate their extremist agendas.

at this time, those who regard freedom of conscience as of utmost importance should remember the efforts of Erasmus to promote peace 500 years ago, and endeavor to be more successful than he was. “Blessed are the peacemakers …”.

I think you should look into the field of being a lecturer. You will most likely get many readers.