Why should economists practice humanomics? 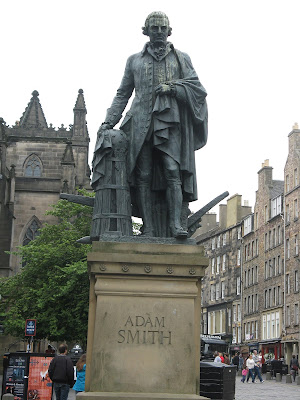 Adam Smith practiced humanomics. It came naturally to him. The famous pioneer of economic science did not need to pretend that humans have been programmed to maximize utility in order to develop his argument that economic specialization stems from a propensity in human nature to “truck, barter, and exchange”.

The word, humanomics, was coined by Bart Wilson, an experimental economist, and is explained in the book, Humanomics, Moral Sentiments, and the Wealth of Nations for the Twenty-First Century, which he co-authored with Nobel winner, Vernon Smith. In that book, humanomics refers to the very human problem of simultaneously living in the personal social world (which is the context which Adam Smith had in mind when writing Moral Sentiments) and the impersonal economic world (which is the focus of Wealth of Nations).

Some important aspects of human behavior cannot be adequately explained if we adopt the assumption, still common in much economic analysis, that individual human behavior is characterized by narrow self-interest. Vernon Smith and Bart Wilson found in their experimental work with people playing economic games that while self-interested utility maximization could explain individual behavior in simulated market contexts, it could not do so in social exchange contexts. In playing two-person trust games, people tend to be more other-regarding than most modern economists assume. I take that to mean that most people are sufficiently civilized and self-regarding to behave with integrity towards others – they see virtue in being trustworthy rather than opportunistic.

Deirdre McCloskey advances the argument for humanomics further in her recent book, Bettering Humanomics. She writes:

“A big part of our human behavior is thinking and talking about human action, not merely solipsistic and thoughtless reaction to, say, a budget constraint. Human action … is the exercise of free will, so typical of humans. It is in fact the free will about which theologians argue. Humanomics therefore goes beyond the artificially narrowed evidence of a silent, solitary, reactive, positivistic, predestined, observational behaviorism.” (p 5)

McCloskey argues that economists should engage in more philosophical reflection about what a speaking species does. The behavioral paradigm of stimulus and response does not adequately explain much of human behavior. Humans often think about the meaning of events before responding to them, and they often consciously explore the options that are available.

Innovation is an example of an economic activity that cannot be adequately understood within a behavioral paradigm that does not allow for thinking and talking. In this context, McCloskey mentions the important contribution of Israel Kirzner in pointing out that real discoveries cannot be pursued methodically – or they would be known before they are known. Innovation requires entrepreneurial alertness. McCloskey adds that a discovery “requires sweet talk to be brought to fruition”:

“An idea is merely and idea until it has been brought into the conversation of humankind”.

McCloskey presents a strong argument that humanomics is needed to explain the great enrichment – the massive improvements in standard of living that have occurred in many countries over the last 200 years. Those who have some familiarity with her trilogy of books on economic history – that should include everyone who is interested in the reasons why the people who live in some countries tend to be wealthier than those who live elsewhere - will not be surprised that she argues that ethics and rhetoric are the “killer app” explaining the great enrichment. She argues that a novel liberty and dignity for ordinary people, including the innovating bourgeoisie, explains the great enrichment.

For present purposes, the important point is that for economists to understand the economic growth process, with its massive implications for human flourishing, they need some knowledge of ethics and rhetoric – ideas in letters and literature that are studied in the humanities. McCloskey argues that if economists consider themselves to be serious scientists, they should use all relevant evidence that they can get their hands on. She makes the point thus:

Many economists spend much of their time on “sweet talk” without being aware of it. I spent most of my working life trying to tell people that incentives matter and that they need to consider whether current institutions – the rules of the game of society – provide appropriate incentives. For example, I am fond of pointing out that if the rules of the game reward rent-seeking – individuals or groups seeking to have governments provide them with assistance at others’ expense - then potential beneficiaries will tend to spend more time rent-seeking and less time engaged in productive activities.

Economists engage in that kind of activity – labelled by some as preaching – because they think that ideas matter and that interests do not always prevail in determining government policies. In my view, people who are trying to obtain greater recognition of the role of institutions and incentives are walking in the footsteps of Adam Smith.

McCloskey might suggest that people like me should consider whether we give too much attention to the role of formal institutions – constitutions, laws, and regulations – and too little attention to ethics and ideology. In discussing the great enrichment she suggests:

“The important “institutions” were ideas, words, rhetoric, ideology. And these did change on the eve of the Great Enrichment”.

The only problem I have with McCloskey’s exposition of humanomics is her dismissal of happiness studies and behavioral economics. Her negative views on these areas of research sit oddly with her argument that economists should consider all available evidence. I agree that many people who are engaged in such research are paternalistic behavioralists, seeking to advise governments how to make people happier. However, I don’t think that provides sufficient reason to suggest that the findings of such research are no relevance to individuals who are looking for information to help themselves to flourish.

In my discussion of the findings of happiness research and behavioral economics in Chapter 7 of my book, Freedom, Progress, and Human Flourishing, I have tried to adopt a contractarian approach. That is the approach adopted by Robert Sugden, a self-confessed behavioral economist, and an admirer of the contractarianism of James Buchanan, in his book The Community of Advantage. Sugden notes that contractarian recommendations are “addressed to individuals as directors of their own lives, advising individuals how to pursue their own interests”.

I concur with the view of James Buchanan that the heartland of economics is considering human behavior in market relationships and other voluntaristic exchange processes. However, I can see no reason why anyone should consider Philip Wicksteed, or any other economist, who offers practical advice on avoiding common mistakes in decision-making, to be stepping beyond the realm of humanomics.

When economists step outside their comfort zone of voluntaristic exchange processes, they certainly need to remember to take their bullshit detectors with them. That certainly applies in considering the findings of happiness studies and behavioral economics. It also applies in considering literary contributions, such as a book I read (and commented on here) about the significance for our understanding of happiness of Samuel Richardson’s 18th century novel, Pamela.

Economists should practice humanomics because they can’t expect to be able to understand human behavior unless they do. Humans do not always behave as self-interested maximizers. It makes no sense to assume that human action always occurs at a subconscious level as an automatic response to stimuli. Individuals often think about the meaning of events, consider their options, and talk to others, before responding. Self-direction is integral to human flourishing.

In seeking explanations for human behavior, economists should not confine themselves to a focus on institutions and incentives. They should be open to considering all relevant information that they can get their hands on, including information on ethics, ideology, and happiness ratings.