Are social movements drivers of progress? 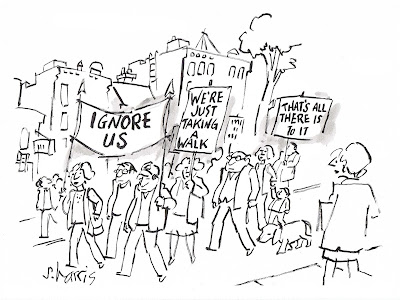 In considering this question my focus is on Mikayla Novak’s recent book, Freedom in Contention, Social Movements and Liberal Political Economy.

Mikayla describes social movements as “sustained collective engagement by multiple participants … aiming to effect change within society”. Mikayla provides an enlightening account of the nature of social movements, the role of entrepreneurship within them, the tactics they use, and of factors that contribute to their success. I focus here on Mikayla’s view that social movements have played a critical role in the realization of liberties enjoyed today in the Western democracies. That line of argument is central to the book, and closely linked to the question posed above.

Before going further, I should note that Mikayla uses an “entangled political economy” framework to examine social networks. That framework, developed by Richard Wagner, views individuals and groups as being intertwined in overlapping relationships of different kinds - collaborative or competitive, or consensual or exploitive. In pursuing their goals, social movements have an irrepressible tendency to entangle with other movements, and with economic and political organizations.

In making the case that social movements have contributed to expanding economic, political, and social freedoms, Mikayla discusses the historical role of some important social movements. The American revolution is discussed as the culmination of a movement resisting imposition of unfair taxation. The Anti-Corn Law League is discussed as a movement rallying public support in opposition to agricultural tariffs that benefitted landowners at the expense of consumers. The movements involved in progressive extension of the voting franchise, including female suffrage activism, are discussed as part of a struggle to gain recognition that all individuals should have equal standing to participate in politics. The success of the American Civil Rights Movement in expanding economic, political, and social freedoms is argued to have inspired subsequent movements including anti-war, environmental and feminist movements.

The author’s coverage of contemporary social movements highlights responses to regulation limiting voluntary productive entanglements of an economic nature. Movements discussed include the Tea Party and the campaign to counter restrictive effects of regulation on availability of medication for people living with HIV/AIDS.

Mikayla also highlights the ongoing challenges posed by cultural-institutional environments that fail to prevent those with political influence using it to obtain benefits at the expense of others, and which repress social movement activities. She paints an alarming picture of rising illiberalism:

“Economic freedom has waned, minorities and many other groups around the world are victimized by violent, reactionary backlash dynamics, and, increasingly, we are meeting the end of a police baton or are being haunted by the constant eye of the surveillance state. All in all, the disturbing trend is that illiberalism appears, again, on the rise.” (p 136)

However, that is followed immediately by a more optimistic message about the future of freedom:

“Nevertheless, it is our position that great encouragement should be taken from the demonstrated self-organizational abilities of ordinary people, worldwide, to formulate social movements to demand their liberties and human rights.” (p 136)

Although Mikayla does not discuss the concept of progress to any great extent, she makes the important point that social evolution tends to be discordant and discontinuous. As a liberal, she focuses on the role of social movements play in the evolution of free and open societies, and expresses strong opposition to “totalizing schemes (drawn up by social movement participants, and by others) aiming at wholesale change to society”.

I believe that social movements have been an important driver of progress, as the concept is defined in my book Freedom, Progress, and Human Flourishing.  I define progress as growth of opportunities for human flourishing – that means growth of opportunities for all individuals to meet their aspirations more fully. I don’t discuss the role of social movements explicitly, but note that social changes accompanying economic progress have played an important role in improving the opportunities available to women and members of minority groups.

My view of cultural evolution as largely benign and emancipative is consistent with the view of social movements that Mikayla presents. There is, however, a slight difference in emphasis. I view cultural evolution as the net result of progressive struggle and conservative resistance, and argue that conservative resistance serves a useful purpose in averting social changes that might later be widely regretted. Mikayla recognizes that counter-movements may be informed by ideological commitments rather than being reactionary, but she leaves the impression that they are more likely to oppose liberal freedoms than to advance them. (See pages 90-91.)

There is also an interesting difference between the items that Mikayla and I discuss as illiberal tendencies. As noted above, Mikayla emphasizes the tendency for minorities and many other groups around the world to be victimized by violent, reactionary backlash dynamics. The things I write about under this heading include cancel culture, attempts to suppress views of opponents, and terrorism. I think we are both right!

Mikayla’s book makes an important contribution in reminding readers in the Western democracies of the emancipative role of social movements in realization of economic, political, and social freedoms that they now tend to take for granted.  In that context, social movements have been important drivers of progress, including the spreading of opportunities for more people to meet their aspirations more fully. Although I am somewhat concerned about the illiberal tendencies in some contemporary social movements, I share Mikayla’s optimism about the abilities of ordinary people to formulate social movements to advance and protect liberty.