Where did I go wrong in writing about the greatest threat to human flourishing? 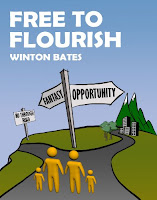 Chapter 8 of my book Free to Flourish, published in 2012, is entitled “The Greatest Threat to Progress”.
The concluding paragraph of that chapter now seems like an exercise in wishful thinking:
“There is an urgent need for innovations to promote a better balance between the responsibilities and effectiveness of government. The best hope is that, as more people perceive the threats that democracy is facing, they will unite to foster the development of better norms of political behaviour."

Do you perceive that a growing proportion of voters in your nation are using politics opportunistically to obtain benefits for themselves at the expense of others? If so, do you perceive that such behaviour is a threat to the democratic political system? Are you willing to commit to promoting mutual benefits for all citizens in your participation in political discussions and in casting your vote?


If you answered “yes” to all those questions, how much time and energy are you prepared to invest in encouraging others to unite with you in fostering restoration of better norms of political behaviour?


Where did I go wrong?


I haven’t changed my view that the failure of democratic governments to cope with their expanding responsibilities is the greatest threat to human progress – the ongoing expansion of opportunities for human flourishing - in coming decades. Democratic failure seems likely to be particularly traumatic for people who have become heavily dependent on government.


My analysis in Chapter 8 of what determines whether democracies can cope still looks sound. The democratic governments that are highly effective in raising revenue and managing provision of services with little corruption (e.g. Sweden) are able to cope with greater responsibilities than can governments that are less effective in performing those functions (e.g. Greece). The ability of democratic governments to cope depends on the balance between responsibilities and effectiveness.


It still seems correct to argue that there is an inherent tendency in democracies for the size of government to expand and for the effectiveness of government to falter. That is a natural consequence of unrestrained politicking by interest groups.


I still think Joseph Schumpeter and Bryan Caplan were correct to argue that citizens are prone to irrational prejudice in political matters. My empirical work helps illustrate the nature of the problem. It shows that the percentage people who seek an expanded role for government is higher among citizens who claim to have little confidence in the civil service and no interest in politics.


My argument that democracy has survived because it has been constrained by constitutions, rule of law and federal systems of government still looks ok. If writing the chapter now I would also emphasise that norms of reciprocity have helped to restrain interest group opportunism in the past.


I think my discussion of changes in democracy brought about by increased citizen involvement through talk shows, social media etc reached the correct conclusion. The changing political environment seems to have provided greater incentives for political parties to become involved in identity politics, and to seen to be doing more to deal with all the problems of modern life:


That quote from Free to Flourish is followed immediately by the heading: “A basis for hope”. That is the section in which I made a valiant attempt to persuade myself that citizens might unite to foster the development of better norms of political behaviour.


There was nothing wrong with looking for a basis for hope. In retrospect, I was just looking in the wrong place.


Developments over the last few years suggest that there is a basis for hope in two different directions.


First, it looks to me as though the consequences of democratic failure might not be quite as dire as I had envisaged in 2012. At that time it seemed to me as though democratic institutions were coming under threat in some countries of southern Europe because of increased public disorder associated with government debt crises and resistance to government spending restraint. I was concerned about democratic governments being replaced by authoritarian regimes, as has occurred under similar in the past in Europe and Latin America.


What has happened is that democratically elected leaders have remained in place to administer the austerity that was imposed by the European Central Bank. The failure of democratically elected governments to control government spending resulted in external imposition of constraints on fiscal policy. This has been accompanied by a great deal of economic misery in the countries affected, but outcomes have been better than I had expected.


As discussed in a recent post, I expect that in most OECD countries the failure of democratic governments to restrain the growth of government spending is likely to cause debt servicing to become a more widespread problem in the decades ahead. Perhaps there are grounds for hope that when they see the writing on the wall, a sufficient proportion of voters in most wealthy countries will be supportive of political parties proposing economic reforms, rather than waiting until they are imposed by creditors (or institutions such as the ECB and IMF).


Second, there is now a stronger basis for hope that the faltering institutions of representative government could one day be replaced by superior institutions. I was sceptical about that possibility at the time of writing Free to Flourish. Since then, however, it has become evident that blockchain technology and smart contracts may have potential to enable people to act together to produce some public goods cooperatively without central government involvement. I became enthusiastic about the potential for that to occur a few months ago when reading The Social Singularity, by Max Borders.  I have learned a little more about blockchain and smart contracts since then, and am still enthusiastic about the potential it offers.


A transition from government to cooperative provision of services cannot be expected to prevent the human misery likely to occur as a result of failure to constrain government spending before debt servicing problems become acute. Over the longer term, however, it may become possible for people to enter voluntarily into real social contracts that offer better opportunities for human flourishing than the hypothetical social contracts of political theory.


Perhaps it would have been better for Chapter 8 of Free to Flourish to have concluded by focusing on ways in which individuals might be able to protect themselves and their families from the consequences of democratic failure.


The most obvious way for people to protect themselves and their families is to avoid becoming heavily dependent on government. I acknowledge that for many people that is easier said than done. Few people choose to become heavily dependent on government. Hopefully, safety nets will continue to be available for those who need them most.  Nevertheless, self-reliance and voluntary cooperation for mutual benefit will provide most individuals the best hope for economic security in the years ahead.
Posted by Winton Bates at 12:29 PM