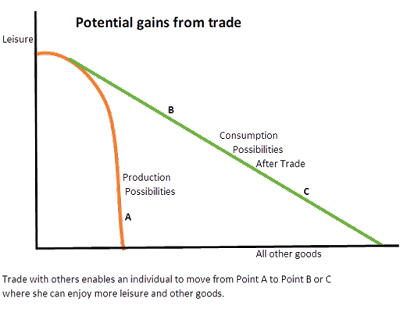 When I was at university studying neoclassical welfare economics - about half a century ago - the standard discussion of the benefits and limitations of free markets began with a demonstration that, under certain assumptions, individuals with stable and internally consistent preferences could maximize their utility through voluntary transactions. As I write, I have a picture in my mind of neat sets of indifference curves in an Edgeworth Box, rather than the gains from trade diagram shown above.


Of course, in the 1960s and 70s a great deal of attention was given to market failure stemming from violation of competitive market assumptions and the existence of externalities. Since then, research by behavioural economists has provided evidence that individuals’ preferences tend to be context-dependent, rather than stable and internally consistent. For example, as we all know, what we choose to buy may be influenced by the placement of items on supermarket shelves.

Robert Sugden has shone light through the smog caused by the standard neoclassical assumptions about individual preferences in his recently published book, The Community of Advantage. Sugden dispenses with assumptions about individual preferences by substituting the principle of individual opportunity – the idea that individuals will choose to have more opportunities rather than less.
Sugden’s book has been praised by some eminent scholars working at the interface between economics, psychology and ethics. It is pleasing that Cass Sunstein, whose advocacy of paternalistic nudges is challenged in the book, describes it as “one of the very few most important explorations of liberty in the last half-century.


Sugden makes the powerful point that there is no basis for behavioural economists to interpret contraventions of the standard neoclassical assumptions as necessarily attributable to cognitive error or self-control problems. There is no known psychological foundation for human decision-making to be modelled as “a neoclassically rational inner agent, trapped inside and constrained by an outer psychological shell”.


Nevertheless, humans obviously make cognitive errors and experience self-control problems. Should economists wash their hands of those problems and leave them for psychologists to deal with? Sugden suggests that economists may be able to help by adopting a contractarian approach – addressing their recommendations to individuals - usually by showing them how they can coordinate their behaviour to achieve mutual benefit - rather than addressing recommendations to paternalistic governments. It is consistent with a contractarian approach for economists to point out the mistakes that individuals are liable to make and to suggest types of choice architecture (e.g. nudges) that they could use, if they wanted, to avoid making those mistakes.


One of the highlights of the book is the perception it offers of the workings of “the invisible hand” of the market. The invisible hand is sometimes portrayed as something that has to be mysterious since it is able to convert self-interest into community benefits. Sugden suggests that the invisible hand is far from mysterious when perceived in terms of the activities of profit-seeking traders looking for arbitrage opportunities. If some individuals are willing to sell something at a lower price than other individuals are willing to pay to buy it, traders can take advantage of the profit opportunities of that situation. From the perspective of the buyers and sellers the transaction helps realize an opportunity for mutual benefit, whether traders are involved or not.


As I see it, from an individual’s perspective the market provides expanded opportunities along the lines suggested in the gains from trade diagram shown above. A person who subsists without trading with others has little leisure time left after eking out a living. By participating in trade - earning a market income in this example - her consumption possibilities are expanded. She is able to get more of what she wants – more leisure and/or more other goods - by helping others to get what they want.


Opportunities for mutual benefit are not limited to market exchange. Mutual benefit is possible in many different types of cooperative interaction. Sugden provides an insightful analysis of team reasoning, contrasting a contractarian approach in which individual team members seek to achieve mutual benefit with the alternative of perceiving the team as a single entity and seeking to maximize the overall good of the team, as judged from some neutral viewpoint.


The author’s analysis of adherence to voluntary practices is also insightful. He notes that individuals realize mutual benefits directly by conforming to voluntary practices, e.g. tipping conventions, because regularities of behaviour provide salient benchmarks for expectations about one another in specific interactions. By conforming to the practice, they also sustain the expectations upon which it depends and help to maintain it as an institution.


In my view, the most important contribution of the book is its discussion of the ethics of intending mutual benefit. A long-standing and recurring theme of criticism of market exchange is that it involves extrinsic motivations that are not virtuous. That line of thinking implies, implausibly, that the intrinsic satisfaction that I obtain from blogging might evaporate if I were to obtain monetary rewards for my efforts. Sugden observes that when people participate in markets they can act with the intention of achieving mutual benefit, rather than personal benefit. He urges readers to adopt the following principle of mutual benefit:


“When participating with others in a voluntary interaction, and for as long as others’ behaviour in that interaction is consistent with this very principle, behave in such a way that the other participants are able to satisfy normal expectations about the consequences of the interaction for them."


The author explains that one of the merits of the principle of mutual benefit is that what it requires of us individually is independent of the motivations of the people with whom we interact. It is in our interests to seek mutual benefit in interactions with as many other people as possible. The principle never requires us to make judgements about another person’s intentions.


The Community of Advantage is the best book I have read about the economics of human flourishing. This brief review has provided only a glimpse of what it is about. Hopefully, it has whetted your appetite to read the book.


The book has raised several issues that I hope to be able to explore further on this blog:
Posted by Winton Bates at 12:50 PM