Why are old Americans more satisfied with their lives than are old Europeans?

The latest WorldHappiness Report (2015) contains an interesting chapter examining how happiness varies around the world by gender and age. The chapter was written by Nicole Fortin, John Helliwell and Shun Wang.

What would you expect those comparisons to show? I guess many people would expect that, on average, women would be less happy than men because in most of the world the opportunities available to females are still less favourable than those available to males.

The data doesn’t actually show that. When people are asked to rate their lives relative to the best possible and worst possible life (i.e. using the so called Cantril ladder) the world averages show that until they are about 50, women tend to rate their lives more highly than men. Perhaps women are more inclined to look on the bright side of life.

That finding was a surprise to me. I was given the impression from research I had read about that happiness was U-shaped over the life cycle. When I looked for more recent literature, just now, I found an article by Paul Frijters and TonyBeatton, published in 2012, based on panel data for Germany, Britain and Australia, which suggests the dominant age-effect is a strong happiness increase around the age of 60, followed by a major decline after 75. So I should have had an open mind about what to expect.

The data in the World Happiness Report shows a great deal of variation in the relationship between age and happiness in different parts of the world. Happiness does not vary much with age in South-East Asia, South Asia and Sub-Saharan Africa. Happiness declines sharply with age in CEE&CIS region (former Soviet Union, Eastern Europe and Central Europe) and less sharply with age in Latin America, Middle East and North Africa and Western Europe. The only regions with the U-shape are East Asia and NA&ANZ (North America, Australia and New Zealand).

It does not surprise me that there is a different relationship between happiness and age in high and low income countries, but I did not expect to see the different patterns in Western Europe and NA&ANZ which are shown below (based on Figure 3.2 of the World Happiness Report 2015).The NA&ANZ data are dominated by America (regional averages are calculated using population weights) so I am seeking an explanation of why old Americans are relatively more satisfied with their lives than old Europeans. 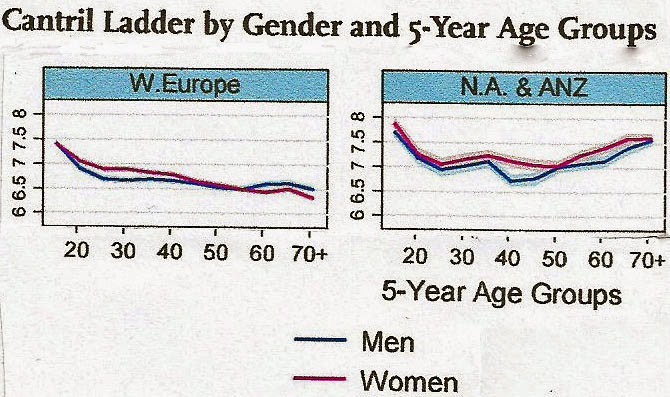 The different pattern between America and Europe also showed up in survey respondents’ reports of some positive emotions experienced the preceding day: smiling and laughing a lot; enjoyment; and learning or doing something interesting. The survey data also shows that older women in Western Europe report experiencing greater sadness, physical pain and depression than do men of comparable age in that part of the world, or people of either gender in America.

A hint about the possible causes of the difference in patterns between America and Europe is given by looking at the determinants of life satisfaction, as indicated in the regression analyses undertaken for the report. Those determinants are income, health, generosity, corruption, freedom of choice and social report.

An inspection of the graphs showing how those variables differ according to the age of respondent suggests that the main area of difference is in respect of perceptions of social support. What this means is that, on average, older people in Western Europe perceive that they are less able to count on relatives and friends for support when they need it than are older people in North America.

It is interesting to speculate about the reasons why old people in Western Europe are less likely to feel that they can count on relatives and friends in times of need. The thought that passes my mind is that the reasons might have something to do with the nature of the welfare states of Western Europe, but that might just reflect my prejudices.
Posted by Winton Bates at 7:30 AM

Email ThisBlogThis!Share to TwitterShare to FacebookShare to Pinterest
Labels: unhappiness and depression, Well-being and utility, What is happiness?