Should self-funded retirees be concerned that interest rates on term deposits have declined?

Some readers will wonder why I am bothering to ask this question. It appears to be fairly obvious that people who are relying on interest on term deposits to fund their retirement must have greater difficult in surviving without drawing upon their capital when interest rates are as low as they are now.

However, it is by no means clear that the relevant interest rate is lower now than it has been over most of the last 15 years or so.

So, what is the relevant interest rate? First, nominal interest rates should be adjusted for taxation since the interest income that people are able to spend is the amount left after tax has been paid.

Second, it is also necessary to take inflation into account in the calculation. Inflation tends to deplete the purchasing power of the amount deposited, so some part of the after-tax interest has to be saved in order to prevent the real value of the nest egg from being depleted. Retirees who do not take inflation into account in their calculations are suffering from money illusion - an affliction that enables them to spend their children’s inheritances without feeling any guilt until they realize how much the real value of those sums have depleted. 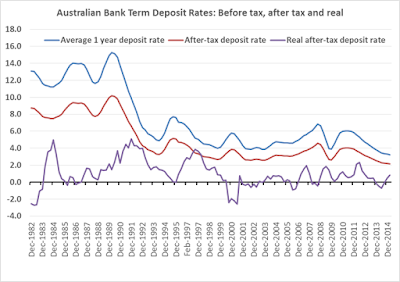 From the chart it looks to me as though it is about 15 years since retirees have been able to spend any of their interest income from term deposits without depleting the real value of their savings.

It is easy enough to understand that some elderly people might suffer from money illusion and consider it to be sinful to deviate from time-honoured prudential rules about living off nominal interest. One would hope that professionals in the investment advice industry would encourage such people to modify their views somewhat to take account of tax and inflation.

However, some senior people in the investment advice industry have been encouraging the view that low interest rates have reduced the real spending power of retirees. For example, Jeremy Cooper, chairman of retirement income at Challenger Ltd, and the man who chaired the 2010 review of the superannuation system, has been reported in The Australian as saying:
“Back when bank deposit rates were around 6 and 7 per cent there was no great problem with self-funded retirees relying on bank interest”.

In the same article, Jeff Rogers, chief investment officer of IPAC funds at AMP Capital, made a similar point. He is reported as saying bank deposit rates “will now adjust to just below 3 per cent, so with core inflation at around 2.4 per cent your real spending power is very small” in a self-funded retirement and warns that even if interest rates do start moving up again, “they won’t be going back up any time soon to the level that provided bank interest of 6 to 7 per cent’’. (Article by Andrew Main, ‘Risk rules for retirees reliant on bank interest’, May 6, 2015.)

It looks to me as though the after-tax real rate was close to zero when bank deposit rates were around 6 or 7 per cent, just as it is now.
Posted by Winton Bates at 7:30 AM