What tax and spending reforms might be feasible in Australia?

The government’s recent tax discussion paper contemplates a similar tax reform agenda to that recommended by the Henry tax review in 2010. The general thrust of the proposals is a move away from taxes which hamper efficient allocation of resources (e.g. stamp duties on property transfers) and taxes which impose disincentives on investment (taxes on capital income) or productive effort (high taxes on labour income).

Some commentators, for example Peter Martin in the SMH, have suggested that the discussion paper “has set out the case for an increase in Australia's rate of goods and services tax”.  Perhaps the report hints in that direction, but the Treasury research findings noted in the report do not seem consistent with the view that there are large gains to be had from substituting increases in GST for the taxes that have highest economic costs. The marginal excess burden (MEB) on GST is estimated to be in the medium range (around 20%) along with taxes on labour income, compared with an MEB of around 50% for company tax. As discussed in my recent post on the intergenerational report, the MEB of a tax rises exponentially with increases in the rate of the tax. If the relevant elasticities are such that the MEB on GST is currently around 20% (rather than around 10% as I previously thought) a doubling of the rate would cause the MEB on GST to 50% - as shown below. 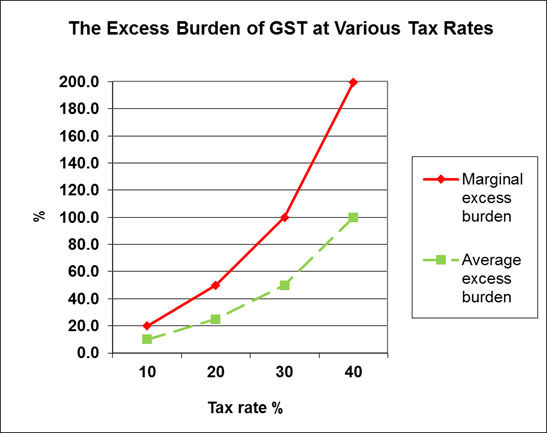 It seems that the only way to get large economic gains by substituting one tax for another would be by relying more heavily on land taxes (and municipal rates) which, according to Treasury research, have a slightly negative MEB. The use of land tax to replace stamp duties on property transfers would make a great deal of sense from an economic perspective and should not pose huge political feasibility problems. People who cannot afford up-front payment of the land tax (e.g. old people who often income-poor despite being asset-rich) could be given the option of having payment deferred until after death, with appropriate interest being charged.

However, I find it difficult to imagine that increased revenue from land taxes could do much more than to replace some of the most highly distorting taxes used by state governments. Perhaps I could fire up my imagination by reading what Henry George had to say many years ago about the desirability of funding government by a single tax on land. However, I doubt whether any politician could persuade the electorate to accept substantial losses on the wealth invested in their homes in the hope that they might enjoy the benefits of lower taxes on capital income. Most Australian politicians are not even game to contemplate the merits of subjecting home owners to the same capital gains tax regime as is applied to owners of other assets.

One way in which it might be feasible to obtain benefits from lower taxes on capital income would be to reduce the tax concessions applying to superannuation. It might also be possible to reduce government spending by tightening up the assets means test on aged pensions. The potential for a bi-partisan agreement emerging in these policy directions has recently emerged with the Labor party offering to end superannuation concessions for the wealthy and the Australian Council of Social Services (ACOSS) suggesting that the assets test on aged pension eligibility should be tightened to better target the pension to those who need it.

At first sight these indications of a willingness among some politicians to contemplate a reduction of concessions to the elderly might appear to be attempting to swim against the tide of grey power – the growing proportion of old voters in the electorate. Paradoxically, however, the ability of any group to benefit from redistributions extracted from the rest of the community tends to diminish as it comes to represent a higher proportion of the population.

A big question which groups representing old people need to face is whether they stand to gain more by using their political muscle to increase their share of the economic cake or by using their political muscle to increase the size of the economic cake. As the elderly come to represent a higher proportion of the population, their attempts to obtain a larger slice are eventually likely to reduce the size of the cake by leading to higher tax rates and thus dampening economic incentives. A larger slice of a smaller cake could end up to be very little indeed. The elderly can possibly defer the time of reckoning by encouraging governments to adopt a complacent attitude toward growing government debt, but that strategy runs the risk of great hardship if the welfare system becomes unsustainable and has to be sacrificed to repay debt.

Perhaps we are now beginning to see the political limits of grey power in Australia. The way ACOSS is using its influence seems likely to produce outcomes along the lines of those I predicted a few years ago when I considered the question of whether the elderly poor tend to fare better under a pensions means test than under universal pension benefits:
“As the increase in proportion of elderly people in the population in Australia reduces the per voter political power of this group, I would expect the per voter political power of the elderly poor to diminish to a smaller extent than that of the much larger group who hope to benefit from the private superannuation tax and pension means test rorts. I expect incentives for early retirement implicit in the superannuation arrangements will be an early casualty as attempts are made to contain government spending on retirees. If a choice has to be made at some time in the future between, say, maintaining the current level of the aged pension in real terms and maintaining superannuation tax concessions, I expect that maintaining the aged pension levels would be likely to win the political debate. Similarly, given a decline in grey power on a per voter basis I doubt whether superannuation tax concession would win the political debate if a choice has to be made at some time in the future between maintaining these tax concessions and an overall lowering in income tax rates to promote economic growth.”

After reading that again, I hope that the government doesn’t forget to obtain a substantial reduction in tax on capital incomes as a quid pro quo for a reduction in superannuation tax concessions.

The conclusion of my last post that young people have good reason to be concerned about their futures is also relevant in considering what tax and spending reforms might be feasible. As young people become more aware of the range of factors that affect their future well-being, more of them can be expected to show interest in the way economic policies are impacting on their own incentives to acquire skills, and on the incentive for investors to take the risks that will need to be taken to ensure the growth of remunerative employment opportunities. Perhaps young people will come to recognize that, as a group, their interests are likely to be best served by lower government spending and lower tax rates.


When a government throws all the pieces of tax and spending policy in the air there is no guarantee that what we will end up with will look any better than the mess we had before. On this occasion, however, there are some grounds for optimism. The political winds seem to be blowing in the right direction .

Postscript
I have just noticed that Treasury estimates of marginal excess burden of GST in their working paper, Understanding the Economy-wide Efficiency and Incidence of Major Australian Taxes (2015–01) imply a much smaller increase at higher tax rates than shown above. See Chart 20, page 36. The Treasury estimates are more likely to be correct, but it would be nice to be able to understand the reasons for the difference.
Posted by Winton Bates at 9:36 AM