Should young Australians be more concerned about their futures?

Young Australians do not seem to be particularly concerned about their futures. The data discussed in a recent post suggests that measures of optimism and pessimism depend a great deal on the specific question that is asked and the context in which it is asked. Nevertheless, it is reasonably clear that young Australians are less pessimistic than young people in many other high-income countries.

Perhaps young Australians should be more concerned about their futures. In considering this question I will rely largely on two reports:


The FYA report attempts to compare the lives of young people today and their future prospects with the lives and prospects of their parents when they were at a similar age. Young people are defined in various ways e.g. between 15-24 years of age, 20-24 and 25-34. The comparisons are largely between relevant data for the present and thirty years ago (1985). The aspects covered by the comparisons are: work and incomes, education, housing, government services, health and environment.

The focus of the Grattan report is somewhat narrower than that of the FYA report. It looks in some depth at change in household wealth, incomes, and government taxes and transfers of people in different age groups.

The environment:
The FYA report argues that Australia is likely to become a hotter place and to be more at risk of fire and drought as today’s young grow older. Some precautionary measures are desirable even if the FYA report is too pessimistic. From an international relations perspective it is important for Australia’s efforts to control GHG emissions to be defensible in international forums. (Interestingly, the FYA report does not include a discussion of international relations; perhaps the region in which we live is now so peaceful that the potential for international conflict no longer comes readily to mind as an important factor affecting the wellbeing of future generations of Australians.)

If the climate change pessimists are correct, nothing Australian governments can do will make much difference, except for policies supporting adaptation. Technological advances will probably help future generations to cope with any increased risk of fire and drought if appropriate investments are made in research.

Health:
The FYA report suggests that young people will live longer and healthier lives than their parents as a result of advances in medical technology and adoption of healthier lifestyles. Between 1985 and 2015 life expectancy of 25 year olds increased by 6.2 years for males (from 74.5 to 84.7) and by 4.5 years for females (from 80.3 to 84.8).

Education:
Over the last 30 years there has been a massive increase in the amount of time people spend being educated but the quality of education does not seem to have kept pace with that in other OECD countries.  Data presented by FYA shows Year 12 completion rates have risen from 44% to 77% (20-24 age group) and the percentage of people with university degrees has risen from 26% to 35% (25-34 age group). PISA scores indicate that basic skills in maths and reading have slipped substantially relative to the OECD average.

Housing:
The Grattan report notes that home ownership is declining, especially among the young. The percentage of 25-34 year olds owning their own home slipped from more than 60% in 1981 to 48% in 2011. FYA notes that the ratio of house price to income rose from 3.2 in 1985 to 6.5 in 2015, while the ratio of housing loan interest to income rose from 3.9 to 7.1. However, the Reserve Bank’s estimates suggest that repayments on new housing loans as a percentage of household disposable income were much the same in recent years as in the mid 1980s.  The relevant percentages are higher than in the early 1980s, but lower than in the late 1980s.

It is also relevant to consider how the price of housing and rents compare with movements in the CPI over the past 30 years. Over the period from December 1984 to December 2014 the CPI All Groups index rose on average by 3.6% per annum, the housing component of the index rose by 4.1% per annum. Over this period, the annual rate of increase in the rental sub-group was 4.9% in Sydney, 4.0% in Melbourne and 3.3% in Hobart. This data is not consistent with a general decline in affordability of rental accommodation over the last 30 years.  The fact that it is costing more to live in Sydney suggests that many people find Sydney to be an attractive place to live.

Government Services and Taxation:
The FYA report makes the widely-known point that over the next 40 years an increase in the proportion of old people in the population is likely to result in an increase in government spending on programs which benefit older people, while young people are likely to be required to contribute more in taxation and to receive less services in return. Young people are already contributing more than their parents’ generation; this is evident in the increase in average student (HECS) debt on graduation from zero in 1985 to about $24,000 in 2011.

The Grattan report provides a more detailed examination of intergenerational transfers. It notes that since 2003-04 there has been a substantial increase in net transfers per household of $9,400 to the 65+ group - mainly in the form of health spending and cash benefits - which has been funded by increases in government debt.

The Government’s latest intergenerational report has projected that under current legislation net debt per person will rise from $10,400 in 2014-15 to $65,000 mid-century, measured in today’s dollars. It is probably not reasonable to expect old people, children and others on relatively low incomes to make much contribution to servicing that debt, so a middle income earner could be looking at having to service an additional debt approaching $100,000 on top of their home mortgage.

We can expect the open season for crazy tax ideas to continue in Australia until we manage to get government spending under control. 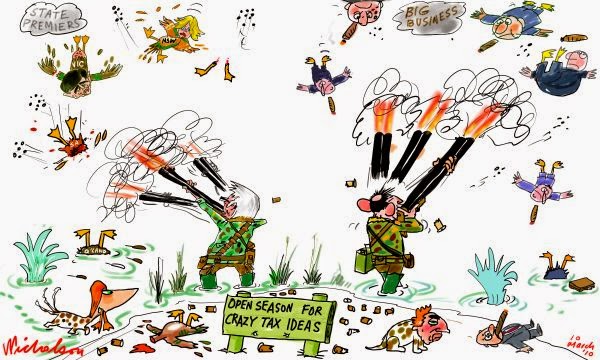 This cartoon by Nicholson was published in “The Australian” newspaper in 2010.

Work, incomes and wealth:
Data presented in the FYA report indicate that the unemployment rate of 13% for 15-24 year olds is similar to that in 1985. However, there are many young people engaged in casual and part-time employment who would prefer to work more. Over the past three decades the percentage of young people who are not able to get as much work as they would like has more than trebled (rising from 4.7% to 16.6%).

As to the future, a decline in the proportion of young people in the population will not necessarily bring about a return to the situation where young people will be able to find secure employment more readily. Technological change can be expected to continue to result in displacement of a growing number of occupations and labour market regulation may continue to favour people who have secure employment relative to job-seekers. Technological change will also provide new opportunities, but the FYA report makes the important point that ability to take advantage of such opportunities will depend on skill development to ensure that “technology augments young workers rather than displacing them”. That might be easier said than done in the context of current opposition to labour market deregulation and education reform.

The FYA report notes that there has been a modest increase of 6.8% in median weekly earnings of 15-24 year olds over the last 30 years. That represents a rate of increase five times slower than experienced by people aged 45-54.

The Grattan report shows that older Australians have also captured most of the growth in Australia’s wealth over the past decade. Households in the 65-74 age bracket are on average $200,000 wealthier than households of that age eight years ago, while the wealth of households in the 25-34 age bracket have gone backwards. The main driver of the growth in wealth of older Australians has been an increase in house prices. Young people have missed out on this as a result of their lower home ownership rates.

As an old person it would be easy for me to be complacent about growing intergenerational disparities of wealth. After all, it is reasonable to expect that older people will ultimately pass on much of their accumulated wealth, isn’t it? Data in the Grattan report suggests, however, that inheritances are typically received later in life and primarily benefit people who are already wealthy. Gifts to younger generations are typically small and also primarily of benefit to well-off households.

In the past I have often tried to dismiss the fears that young people have expressed to me about their future lives with some comforting words about the benefits of ongoing economic growth. I still think the problems discussed above will be manageable if Australia can maintain rates of economic growth comparable to those experienced during the last 30 years.
However, it will be difficult to maintain economic growth comparable to the past, given projected changes in the age structure of the population. We may not have much economic growth at all if an increasing tax burden is placed on investors and medium to high income earners. Investors can easily find attractive opportunities elsewhere in the world and medium to high income earners are likely to be increasingly attracted by the pleasures of early retirement, particularly if they can look forward to a government-funded pension after their savings are sufficiently depleted.

In my view young Australians have good reasons to be concerned about their futures.
Posted by Winton Bates at 7:30 AM

Thoughtful post, Winton. I will respond when I have had a chance to read the source documents.

I look forward to your comments, Jim.