Is a fixed mindset more realistic than a growth mindset? 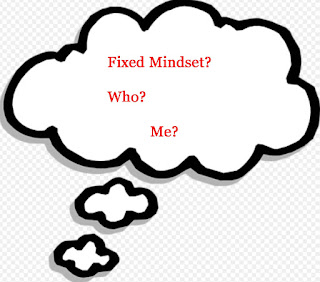 Before I got far into Carol Dweck’s book, Mindset, I was confronted by the thought that the author might classify me as having a fixed mindset rather than a growth mindset. Dr Dweck is an eminent psychologist who has conducted a great deal of research on mindsets. She suggests that if you believe that your intelligence “is something very basic about you that you can’t change very much” you have a fixed mindset, but if you believe that you “can always change how intelligent you are” you have a growth mindset.

In considering those propositions (along with a couple of other similar ones) my mind turned initially to research showing that for most people IQ tends to remain fairly stable throughout life. That must mean that existing IQ is a good predictor of future IQ. If you choose an individual at random it would be safe to bet that their IQ is not likely to change much.

However, after a few moments I realized that I was adopting what I call a spectator mindset. I was considering the relevant literature like a spectator who is not personally involved. I had overlooked the fact that the author was asking whether I agreed with certain beliefs about the potential for my intelligence to change.

When I began to think from a personal perspective, books by Norman Doidge on brain plasticity came to mind. From a personal viewpoint, I think it makes sense to view your intellectual capacity in much the same light as your physical fitness. Your brain is like a muscle – use it to make it strong. Or, at my age, if you don’t use it you lose it!

As I read further into the book I discovered that, like many other people, I alternate between fixed and growth mindsets.

I was induced to read Mindset, by an article by Nela Canovic on the Quora site where people were discussing the most important thing they have learned in life. The article got me wondering how closely Carol Dweck’s distinction between fixed and growth mindsets corresponds to the distinction between spectator and player mindsets that enabled me to greatly improve one aspect of my life about 14 years ago. It makes sense for a spectator to focus on what she or he expects to happen, but to be successful at anything you need a player mindset – to focus on your intentions. That is one of the most important things I had learned from life. (I have recently written about it on this blog.)

My concern in this post is with the realism of different mindsets because I don’t think it serves us well to maintain delusions about ourselves.  As I see it, human flourishing depends, to a large extent, on realism – seeking understanding about important aspects of your own life and human life in general, and being disposed to act on that understanding when circumstances permit. As previously discussed on this blog, that view has been reinforced by my reading of Wellbeing: Happiness in a Worthwhile Life, by Neera Badhwar, a philosopher.

As I see it, fixed and growth mindsets must both be closely related to the meanings that people give to their experiences, and how those meanings or interpretations shape their intentions and future behaviour. Is a growth mindset more realistic than a fixed mindset?

Carol Dweck suggests that the fixed mindset – the belief that your qualities are carved in stone – “creates an urgency to prove yourself over and over”. She adds:
“If you have only a certain amount of intelligence, a certain personality, and a certain moral character – well, then you’d better prove that you have a healthy dose of them. It simply wouldn’t do to look or feel deficient in these most basic characteristics”.

The book emphasises is that this mindset gives people one consuming goal – proving themselves: “Every situation calls for a confirmation of their intelligence, personality, or character”. In this mindset people tend to avoid coming to terms with reality if reality doesn’t validate their views of their own qualities.

What about the people who have a fixed mindset which involves labelling themselves as stupid, erratic, neurotic, lacking in willpower, or manifesting some other quality associated with poor performance? The author doesn’t give much attention to the potential for people to develop fixed mindsets which involve labelling themselves as poor performers. That could be because she sees fixed mindsets as stemming largely from attempts by parents and teachers to boost the self-esteem of children by telling them how clever they are, and so forth.

In her discussion of willpower, the author’s main emphasis is on the potential for people who believe they have strong willpower to fall into the trap of firmly resolving to do something, then failing to act according to their intentions because they make no special efforts to do so. She doesn’t mention that people who have come to label themselves as lacking in willpower might give up making resolutions to do things that could improve their lives. Perhaps that point is too obvious.

When I went looking in the book for recognition of the potential for people with fixed mindsets to label themselves as poor performers, I did find some. For example, there is recognition of this in the author’s discussion of the higher incidence of depression among students with fixed mindsets, and in her discussion of the learning potential of inner-city children who have been labelled as retarded or emotionally disturbed. The author also writes:
“People tell me they start to catch themselves when they are in the throes of the fixed mindset – passing up the chance for learning, feeling labelled by a failure, or getting discouraged when something requires a lot of effort. And then they switch themselves into the growth mindset …”.

Carol Dweck explains:
“The growth mindset is based on the belief that your basic qualities are things you can cultivate through your efforts. Although people may differ in every which way – in their initial talents and aptitudes, interests, or temperaments – everyone can change and grow through application and experience”.
The author refrains from making unrealistic claims about what can be achieved with a growth mindset. She suggests that people with a growth mindset don’t believe that with proper motivation and education anyone can become an Einstein or a Beethoven. They believe that “a person’s true potential is unknown (and unknowable); that it is impossible to foresee what can be accomplished with years of passion, toil, and training”.  As discussed in an earlier post, practice in being alert to opportunities could also be expected to expand growth potential.

In the growth mindset people accept both failure and success as providing learning opportunities. The most important questions: What can I learn from that experience? How can I use it as a basis for growth?

Mindset contains important messages about ways in which parents, teachers and coaches can encourage children to adopt a growth mindset. Carol Dweck considers the message of praising effort rather than outcome to be too simplistic.  She now advises teachers and parents “to praise a child's process and strategies, and tie those to the outcome”. In my view she is encouraging realistic appraisal of personal performance and potential for improvement.

My bottom line: Don’t fool yourself that you are being realistic if you adopt a fixed mindset about your intelligence, personality or moral character. Everyone is a work in progress. We make progress by learning from experience.


Postscript:
My attention has been drawn to a study by Yue Li and Timothy Bates that has failed to replicate Carol Dweck's findings regarding praise of intelligence of children and children's beliefs in the malleability of their basic ability. Please see comments below for further information.
Posted by Winton Bates at 2:24 PM

Thanks Saroosh Wattoo.
The abstract of the paper by Yue Li and Timothy Bates states:
"Mindset theory states that children’s ability and school grades depend heavily on whether they believe basic ability is malleable and that praise for intelligence dramatically lowers cognitive performance. Here we test these predictions in 3 studies totalling 624 individually-tested 10-12-year-olds. Praise for intelligence failed to harm cognitive performance and children’s mindsets had no relationship to their IQ or school grades. Finally, believing ability to be malleable was not linked to improvement of grades across the year. We find no support for the idea that fixed beliefs about basic ability are harmful, or that implicit theories of intelligence play any significant role in development of cognitive ability, response to challenge, or educational attainment."

A pre-print of the paper can be read here:
https://osf.io/preprints/socarxiv/tsdwy/

This is an inspiring post. I think philosophically it complete makes sense that the malleable or growth mindset would lead to personal growth and increased potential even if the science as of yet does not bear that out.

Thanks Leah. It is a truism that people who are open to learning from experience will learn more than those who aren't. I hope psychologists move quickly to sort the grain from the chaff in this area. I doubt whether grandparents do any harm by telling children that they are clever when their behaviour shows that they are clever. But it would be good to be sure.