When you buy coffee and chocolate do you want to know the story about the people who produced the beans?

I bought my first batch of Arabicas Blue Mountain Gold coffee online from Papua New Guinea last year, after sampling the product when I was working in Port Moresby. I was impressed by the flavour, but was also attracted by the story of how this fine variety of coffee - first planted in PNG in the 1930's from seeds imported from Jamaica - is grown mainly by farmers with small plots of coffee trees, using traditional farming methods.

It is not clear to what extent the farmers actually benefit at present from marketing telling that story, but there must be potential for them to obtain greater rewards in future if the combination of a good story and a product of consistently high quality leads to growth of demand for their output.

Before spending a couple of weeks in PNG recently I told people who asked why I was planning to have a holiday in such a dangerous place (please see my last post for an attempt to put those risks in perspective) that one of my reasons for visiting was to see where my coffee came from. As things happened, I didn’t actually get to see where my coffee came from, but I did see a coffee plantation near Goroka. The fruit shown in the photo will turn red over the next few weeks before being ready for harvest. 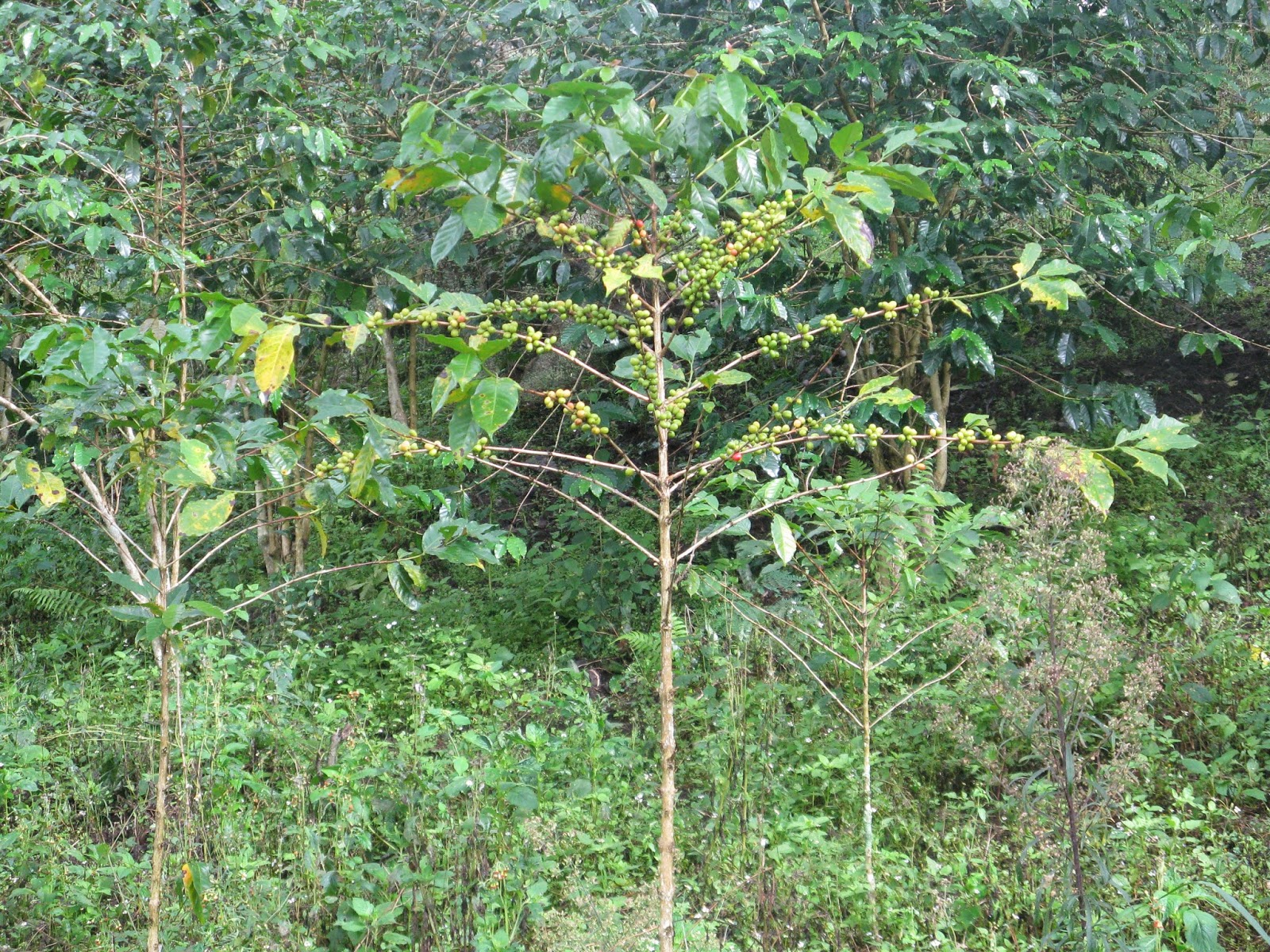 I also had the opportunity to visit a processing facility in Goroka and to learn a little about the industry from the manager of the firm. He has asked me not to give him any publicity because his firm does not sell directly to the public and gains no benefit from any time he spends showing tourists around. I was fortunate to arrive on his doorstep just as he was about to show his operation to a group of bank officials and to be allowed to tag along.

It was interesting to see the effort required for quality control, particularly in order to give purchasers of organic coffee (usually grown on small holdings) a high quality product. For example, quality is better when care is taken to only pick ripe fruit and to ensure that beans are properly dried in the sun. If the beans are not dry when they come to the mill they have to be dried using equipment such as that shown below. 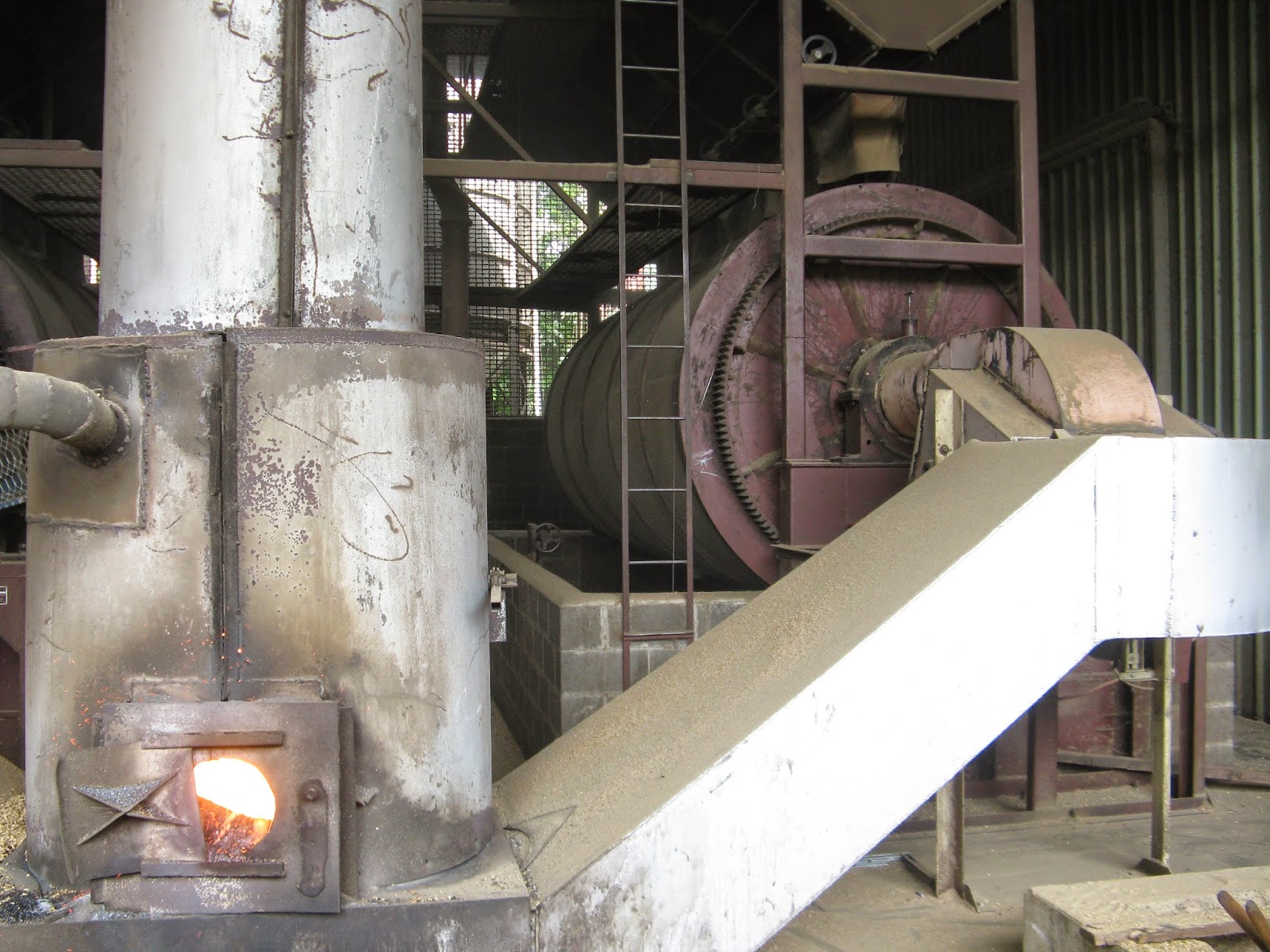 The factory tour ended with a coffee tasting which demonstrated large differences between various grades and blends of coffee.

During my PNG holiday I also visited Madang and had the opportunity to see cocoa being grown. The Madang Resort hotel organised for me a trip to Hobe, a small village not far from Madang. I spent an hour or so with Joel Lalek on his cocoa farm. 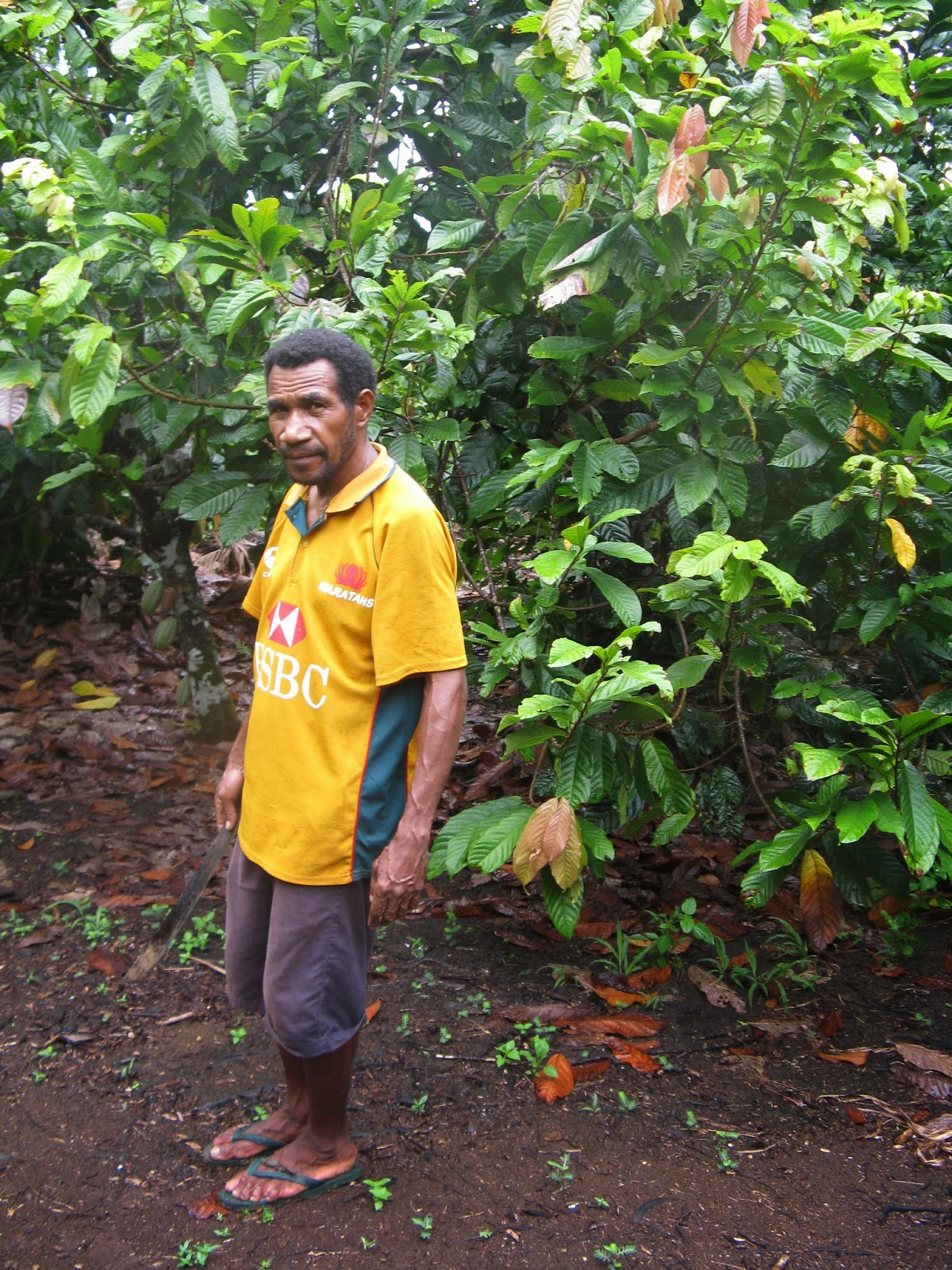 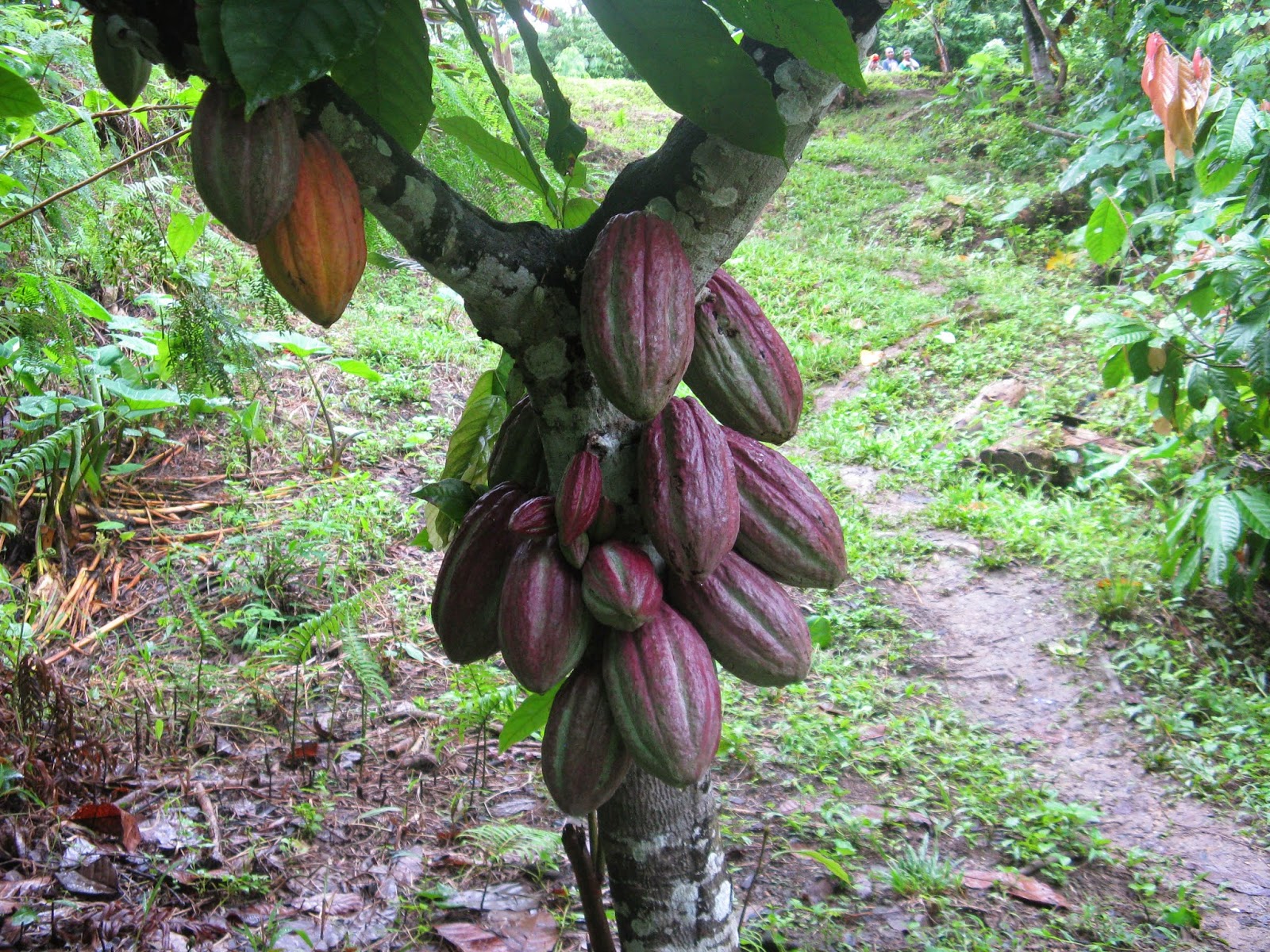 Joel described himself as a subsistence farmer, but his cocoa activity looked fairly commercial to me. His crop is fermented and dried by his brother using the equipment shown below. 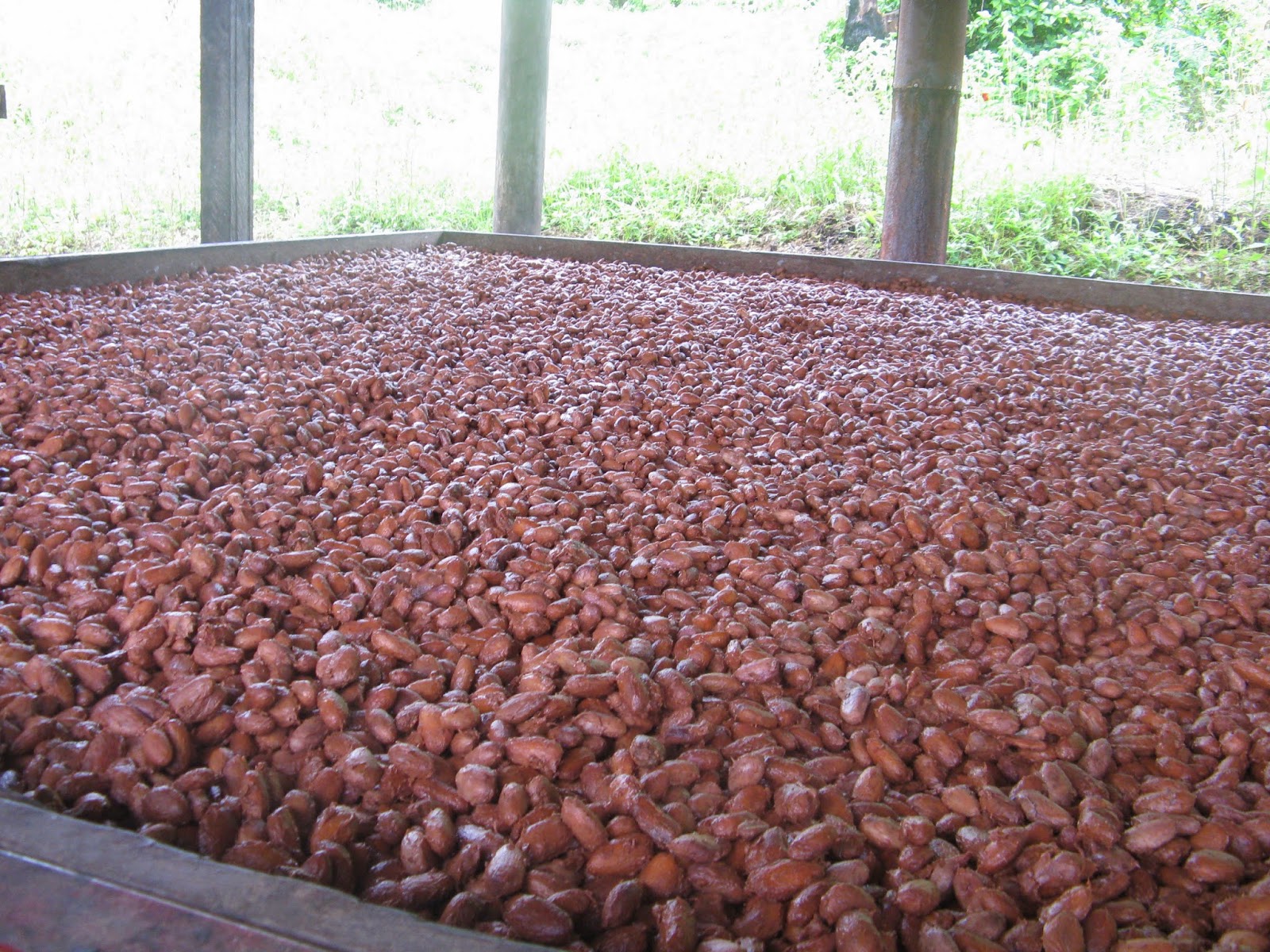 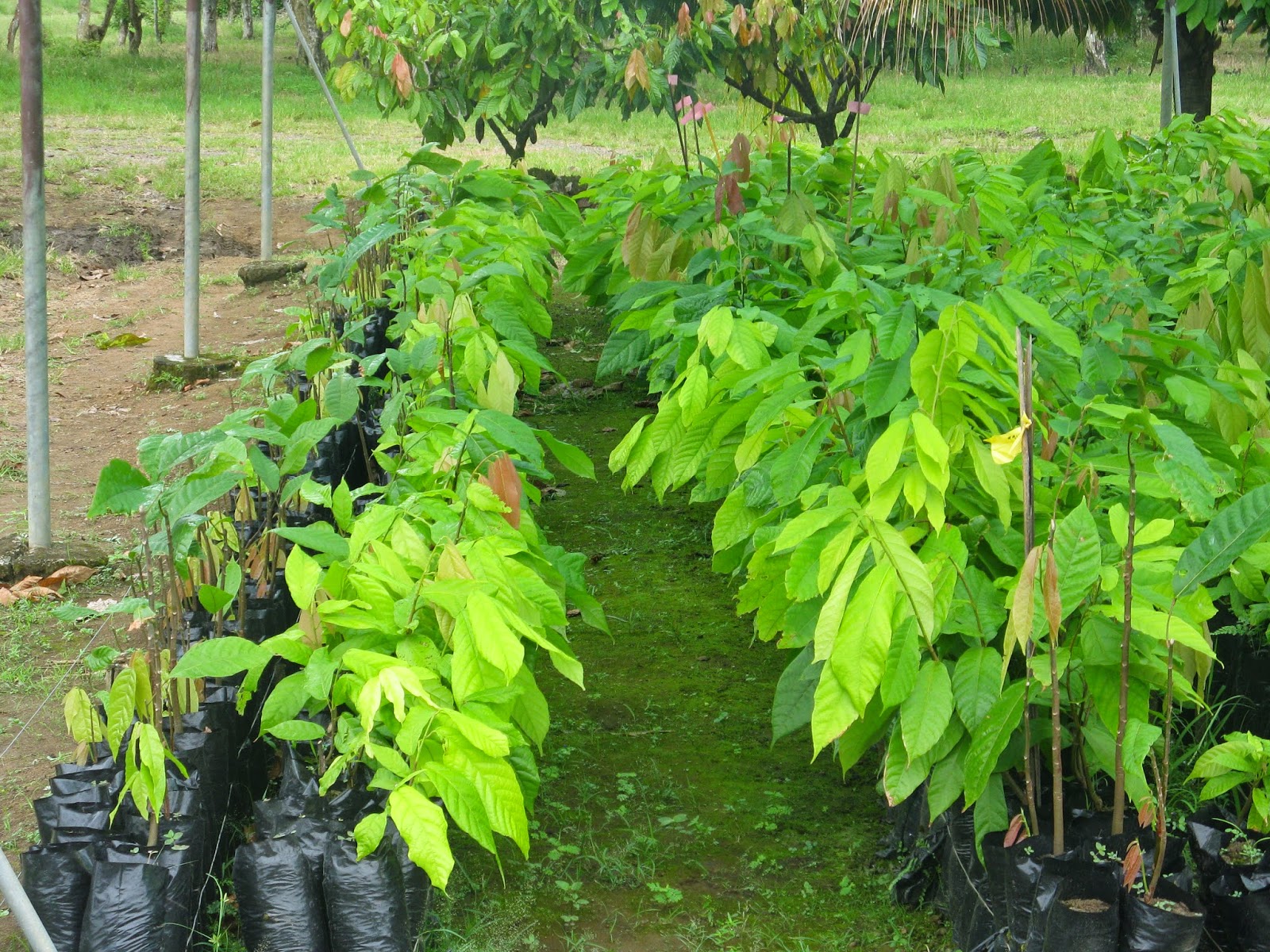 The research manager of the Stewart Research Station explained to me the origins of PNG cocoa and the aims of the current breeding program. PNG cocoa is based on the Trinitario variety, often used in high-quality dark chocolate. Unfortunately, the variety is susceptible to cocoa pod borer, which has devastated harvests in PNG during the last decade. One of the aims of the breeding program is to provide greater resistance to this pest. Meanwhile, farmers in some areas have had considerable success in controlling pest outbreaks through pruning and sanitation practices e.g. burying diseased pods.

A question I was turning over in my mind during my PNG visit is why I haven’t found the same opportunities to obtain single source chocolate based on PNG cocoa as I have to purchase PNG coffee. It would be good to be able to find a regular supplier of high quality dark chocolate with a PNG village story attached to it.

It seems likely that better opportunities to buy single source PNG chocolate might arise in future. People who live in the US can already buy chocolate made from PNG beans from Tejas Chocolate. Perhaps the partnership between Cadbury Australia and Monpi Cocoa Exports will eventually provide similar opportunities to Australians.

It would be nice to be able to end this article with some optimistic observations about the opportunities for better returns for coffee and cocoa farmers in PNG arising from the increasing demand of consumers in high income countries to be told the story behind the food and beverages they buy. I have not found any research which would provide a solid basis for such optimism, but I have not spent much time searching the relevant literature. All I can offer at this stage is a glimmer of hope.

It is indisputable that many consumers like to know the story behind some of the products they buy. Wine comes to mind as a prime example. Yet, in recent years we have seen a trend toward commodification of wine sales in supermarkets, with the use of hidden labels and own-brands. That trend is presumably meeting a demand for a product of reasonable quality at a relatively low price. The trend toward commodification may continue for some time, but when people are buying high quality wine they will still look for a label which tells the story of when, where and how it was produced. I guess the pattern of demand is fairly similar for coffee and chocolate.

The characteristics of farming in PNG typically meet a range of the interests and concerns that people are likely to have when they want to know the story behind the products they buy. The fact that the varieties of coffee and chocolate grown in PNG are at the high quality end of the market certainly provides a basis for positive stories. The fact that chemicals are rarely used by village farmers helps to meet some consumer concerns about health and environmental impacts. Telling a story about village farming can also be consistent with marketing arrangements which help meet the concerns that many consumers have about remuneration for farmers.


Most importantly, the stories that PNG farmers can tell are intrinsically interesting because their lives are so different from those lived by most people in high-income countries.

So, dear reader, when you buy coffee and chocolate do you want to know the story about the people who produced the beans?
Posted by Winton Bates at 7:30 AM